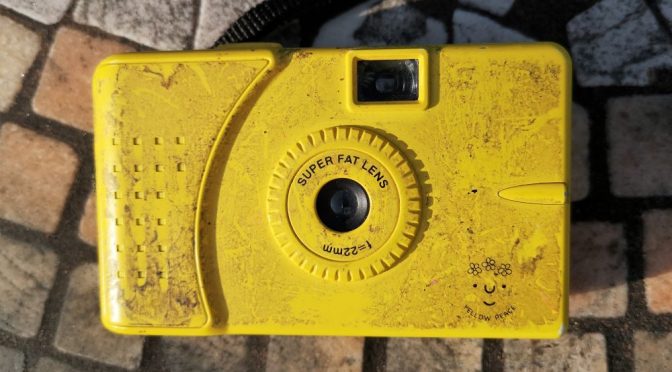 Too often I have to do a review based on just a couple of rolls. But some cameras hang a round longer and I thought it might be worth revisiting those. We begin with the my Superheadz Wide and Slim, a clone of the Vivitar Wide and Slim (VUWS). This is often seen as one of the best Lo-Fi cameras still made

But does it deserve that ? And why you should by a a Black one ?

A clue to how good this is, can be seen in the fact that it’s one of the few survivors from the pre digital dominance that are still made. The earliest dating of the original VUWS was 2002 but it may have dated before that.

The VUWS was generally seen as a freebie giveaway in it’s day. Sunpet Industries the HK company who made it for Vivitar continued to offer it and you can still buy it today from the likes of Superheadz.

It has acquired a cult status and is known as the poor man’s LC-A (although I’m guessing that moniker was applied when it could be found in UK Pound shops and US thrift shops new).

But is that deserved ?

It isn’t really that cheap now and unlike the the LC-A this is a simple plastic camera with a fixed focus 22mm 2 element plastic lens with a fixed aperture and shutter (f/11 & 1/125 allegedly). All wrapped up in a box not much bigger than pack of playing cards (the VUWS is a contender for the smallest production 35mm). The camera’s film plane like many lo-fi numbers is curved slightly. This is not surprising as it’s way of dealing with the Petzval field curvature of simple lenses.

It’s the lens that makes this.

It is not the best lens you have ever seen. It’s plastic alright and there are better clinically plastic lenses like the Goku UF1. But this is a pretty sharp centrally lens that falls off towards the edges and vignettes quite a bit. It really does give you that classic LC-A look but with it’s own twist.

It’s also incredibly wide angled at 22mm. It’s focal point is well set so depth of field carries acceptabvle focus from fairly close up right out to the distance. It will soften on landscapes but no worse than many much higher end AF compacts. It also pincushion distorts but given it’s a plastic 22mm lens that’s surprisingly not that bad.

It’s not perfect but for a Lo-Fi shooter it is one of the best out there. The choice of f/11 &1/125 make sense allowing you shoot the VUWS in most daylight conditions with 400ISO negative film and in bright conditions.

Well obviously this camera is very limited. There’s no control other than what ISO you load. You have no option to add a Flash like many other lo-Fi rivals.

There are however mods out there with this indestructibles guide being one of the most comprehensive even including adding a hot shoes for flash. You’ll need to tear apart the camera and is one for the brave. A much easier mod for adding filters was described by Charles Higham on 35mmc just requiring some glue and a filter adaptor.

Another issue relates to the plastic build. The camera itself is robust enough. I wouldn’t recommend dropping it – but it has survived doing that a few times with me and come out just slightly scuffed. It’s more to do with the wind mechanism. The manual warns you not to use more than 24 exp film. That’s good advice. I’ve loaded 36 exp a few times and boy does your camera feel it’s about to explode when the count goes over 30. It seems to get worse and I really won’t do it again.

Then there’s the coating….

The Superheadz ones use a rubberised coating which is like those found on many early 20th century cameras such as most Nikon consumer SLR. Just as with them, that stuff tends to turn sticky and messy. The older cameras used the coasting on black areas so you don’t notice but your Superheadz (unless you’ve the black slim devil version or another dark colour) shows up the muck after a while.

Despite the tacky coating this is one of the finest Lo-fi shooters for daylight. It’s so ultra compact that it’s an easy pocket carry spare camera. It has limits – notably the fixed exposure and 24 exp limit. But that lens just brings something in.

I’m very happy and will get another when this old sticky mess finally dies on me. It’ll just be black….

The VUWS sat at the top of my Top 10 Plastic-Fantastic cameras and there’s some standout rivals there. Notable is the Halina Panorama which has weaker lens but similar features and a bit of cult following. Stepping up there’s the clinically incredibly good but rare Goku UF. Then there’s the likes of the Holga 135BC or Diana Mini that offer some Lo-Fi exposure control.