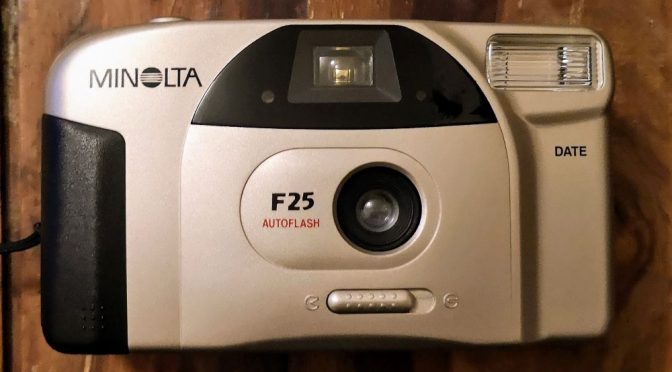 After a run of not so cheap cameras, I thought I’d better get back to basics with another Poundland challenge 2019 camera. In brief that challenge set out to find what you could buy for a quid and although we’ve had several high end cameras including the MZ-5 SLR, I’d rightly assumed that we’d be faced with several fixed focus plastic numbers.

But this no frill plastic flash camera doesn’t hail from Haking, Hanimex or Concord. This one’s a Minolta and it’s not good.

I have bit of a love hate relationship with Minolta to be honest. I’ve yet to pick up a bad Minolta 110 camera but their AF compacts have yet to excite me (the Minolta Riva/Freedom Zoom 90c made it into my list of crap cameras).

But this promised to be neither. It’s a made in China, no frills camera. Aimed at families in the emerging/developing economies or for holiday makers whom wanted a cheap camera for the beach. Like some other F series cameras, it has a more advanced AF counterpart the AF25. I use the word more advanced with caution, as it is literally the same camera but with rudimentary AF.

The spec and manual can be found online if you google hard enough but the manuals I’ve seen are on some non secure sites in the FSU. The camera weirdly seems to have been popular in eastern Europe and the Balkans as 3 out of 4 sites describing it are based West of the Rhine. This Etsy page lifts the spec straight from the manual (and yes the seller is Russian)

The camera specs are a simple fixed focus 35mm 1:6.3 lens with a fixed shutter speed of /125. Having torn down the camera I can confirm the aperture is fixed too. The lens is plastic but seems to have at least 2 elements (my money’s on 3) on the rear it’s labelled rather hopefully as Genius 3. Focal range is claimed at 1.3m to infinity but as we’ll see that’s quite hopeful and doesn’t quite add up.

The bright viewfinder has frame lines including a set of parallax markers when shooting at 1.5m or less, It’s probably the highlight of the camera and not bad for a cheap shooter. Just a shame the frame markers don’t line up with the actual frame taken. A Green LED tells you the flash is charged.

The camera has a built in auto flash. This charges as soon you open the sliding lens cover irrespective if you need it or not. The camera has DX coding with 3 contacts but the manual is clear. This camera only delinates between 2 speeds 400 ISO and 100/200 ISO. I’m pretty sure all that does is adjust when the flash kicks in.

The Flash has a range of 1.3-2.5m which suggest a GN of ~12 (m) at 100 ISO. The flash is purported to have red-eye reduction. The manual suggest a flash recharge rate of 6 seconds when used with 2 fresh AA batteries and those batteries should last 24 rolls with 50% flash usage.

The batteries as well as powering the flash and simple metering also drive the autowind. The camera has an easyload set up but when you’re finished shooting you must manually rewind using the switch on the base. the autowinder is obvious in noise levels. The lens cover switch also serves as a shutter lock.

My version came with the databack. Although replacing the CR2025 got the display back the imprinting failed. Shame as it actually might outlive me as it goes from 00-50 in years. This points to the camera being made in the early part of the 21st Century.

Looks (or lack of)

This camera was never gonna win any design awards. It is styled to resemble any one of a myriad of cheap low price fixed focus compacts. It’s cheaply but well made out of plastic and feels reasonably solid.But it is bulky for a 21st century camera even a cheap one.

So the camera doesn’t live up top the promised 1.3m to infinity. And to be honest it could never do so with a f/6.3 aperture lens. If you plug the lens size and aperture into a Depth of Field (DoF) calculator you’d generate a hyperfocal distance of 6.47 meters . If the the F35 was focused at that then objects any closer than 3.3m would not appear well focused but distant images would be relatively in focus.

But the reverse is true suggesting the focal point is much closed neaer 3-4 meters.

Distant stuff is just plain awful. And it isn’t not helped by the obvious chromatic fringing but a couple of meters away things are okay. So this camera would vaguely be okay for snapshots of friends but naff all use for taking long shots.

I say vaguely as things are still soft and fall off quite a bit away from the centre. You can see this on the Garage radial distortion shot below. The Garage is okay but the plants around are a blurry mess.. The shot also illustrates the barrel distortion that’s is evident but about what I’d expect.

The camera exposure relies on film latitude a lot to survive. The flash will kick in when light drops but with a f/6.3 lens that’s pretty late on especially with 400ISO. The problem isn’t so much low light but using 400 ISO in bright light. That’s because the exposure stays fixed. At f/6.3 and 1/125 on a sunny day about

At least the flash does what it says on the tin.

I hate this. Doing a teardown of a camera is not something I usually do. But I did here.

This is just a cheap number and worse coming from Minolta. There’s no lo-fi charm here as you sometimes get from cheep ‘n cheerful makes like Haking or Hanimex. In fairness It’s not quite as bad clinically as the Olympus Trip 500. But then again there’s some oversaturated vignetted charm from the Trip for the most hard core lomographer or drunk art student.

And there’s nothing to get charmed about here. Move along.

Whilst I don’t like the Trip 500 the Olympus Trip 505 is more worth a look. No wonderous features but looks nicer and takes okay quirky shots. The VUWS and its clones despite being completely basic does a whole lot better too. And has lashings of charm and a lens that shoots outwith it’s league. Haking’s Halina Speedy 33 has actually more charm, clinically better and some control over exposure too.