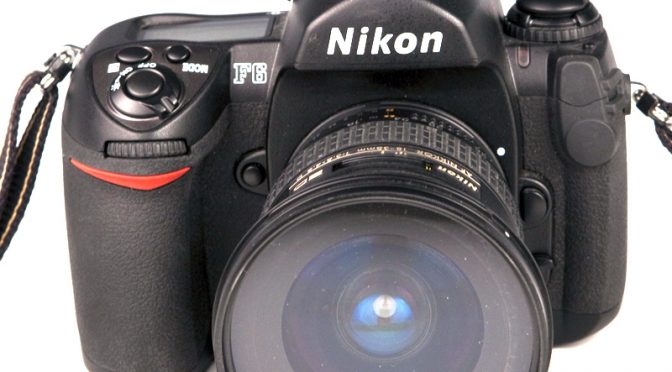 The Nikon F6, their flagship 35mm SLR is no more. Ending months of speculation about the future of arguably the most advanced SLR ever made and the last Nikon film camera. But whilst some have claimed this is the end of 35mm SLR era, it is far from that.

The F6 was the last of the professional Nikon F series and was in production from 2004 giving it a career lifetime outlasting all other F models but the F2. Widely seen as the absolute King of film SLR technology, if not of film camera technology.

But Nikon pulled the plug. And I’m not surprised. And you know, we’re all a bit to blame. Nikon’s pull out followed Canon’s in 2018 (production actually stopped in 2010). This leaves Leica as the only high end manufacturer of 35mm cameras. But as we’ll see that’s not the whole story.

We’re in a disposable culture .

Some folk effectively binning their daily carry (smartphone) camera every year or two for a newer model. But even consumer level Japanese film SLR got built to last. And the F6 was pro body. My oldest SLR, the Ricoh Singlex might be a bit scuffed and the mirror foam suspect but it still works over half a century later. As does my Brownie No 2 which dates from the early 1930’s.

Over 800,000 of the Nikon F alone were made between 1959 and 1974 [read Aly’s Vintage Camera Alley review of this classic) . Many of those are still serviceable. Millions of F models would follow.

The pool of actual pros and rich wannabies had shrunk since 2004 and the F6 was really just a incremental step from the F5. A bit like updating your IPhone 6 to a iPhone 7 or 8. The wannabies would have loved the lighter weight and the pros would get more out of the creative lighting system. But everything else was marginal.

So many stuck with the older model. And given you could soon buy a second hand F6 for a 1/3 of the new price…. Which lead us to.

The Nikon F6 was a flagship camera. As such it commanded a hefty price. Largely being made in small batches in the later years by a precision team, it was no wonder that it was expensive. Listed by Nikon USA at just Under $2000USD a few months, ago. That’s still way cheaper than its dSLR successors the Df, D5 or D6. And still cheaper than the prosumer Z7, D850 and D780.

When rumours of it’s demise became more serious I contemplated getting one. I then remember I’m no David Bailey and that it was still quite a bit for second hand gear the costing £500-700. It’s a lot more now.

And that’s it. I more realistically handled a lovely early 70’s Nikon F with photomic hood from a proper camera shop in Bath. I got slight approving noises from my other half that if got it, I would only need to sleep with the dog for 1 week but need to get rid of something similar. The week with the dog I could live with but the latter was a sticking point. I couldn’t smuggle it our Airbnb so I passed.

One day a F or a later version will grace my home and the dog will have some company at night for a while. I’m not sure it will do any better than my prosumer models like the F90x or FE. But it’s a F right ?

But a 2 grand new F6 was never in the offing. And that’s the issue we weren’t buying them new.

We bought them and older models for way less.

Nikon’s Marketing team need to take a wee bit of blame. Fair enough have Nikon F6 flagship model but where was the middle ground ? The only models to limp on with the F6 after the legendary 2006 cull of film models was the FE10 and FM10. And they aren’t even true Nikons.

The Cosina made cameras are basically Cosina C series cameras with a F mount and Nikon styling. Cosina also used the same underpinnings for others. The CT-1 for example was used for the FM10 but also the Olympus OM2000, Canon T60 and Voigtländer Bessa rangefinder amongst others.

These were aimed at photography students in the developing world, where the need for a basic manual focus camera existed. But hey given you could but the CT-1 for around a tenner and as rule K mount lens could be sourced cheaper. So funnily enough demand dried up and despite cutting down to just the FM10, product ceased a few years ago ending Cosina’s film camera history.

But there was nothing in between.

However the story of the film SLR does not die with the F6.

But there’s no demand you just said so …

Not quite.
So Nikon couldn’t continue a profitable film camera nor could Canon and the other big companies. And there was the failed attempt to get a new SLR off the ground in the form of the Ihagee Elbaflex.

But that’s not the best example. It is a meterless revised version of the Kiev 19M (if it ever reaches production). It’s also likely that even had it achieved funding that few would have received a cameras the parent company Net SE went Bankrupt leaving many crowd funding investors out of pocket on their launch of new Meyer Optik lenses.

But they are not the only story

The SLR is Dead. Long live the SLR

For those of you with lottery level deep pockets you ca still buy a brand new established name SLR. Granted that’ll be in 120 format and requires some outlay. Hasselblad don’t technically sell new film cameras but you can buy one of their H series digital cameras and swap the the digital back for a film back. The back cost over £600GBP but that’s a snip compared to a camera that cost over £30,000. But the option is there and serves a somewhat exclusive (and filthy rich) niche.

Five figure commitments to film photography are not necessary however. The film SLR is a alive and kicking for the price of a reasonable bottle of Scotch.

The thing is it’s the new disruptors that have captured the market. And there is a theme.

The folks at Lomography AG must have had a wry smile at the announcement of the death of the SLR. Every Hipster’s favourite camera supplier has quietly been selling their own SLR since 2013. In fact it has been so successful, it has been revised with addition of a PC sync slot

I say selling as you have to produce the Konstructor. This is the Recesky on steroids. After an average of 2 hours of cursing, searching for pinged screws and springs, you should have a functional DIY 35mm SLR. Okay so it is basic with a non interchangeble plastic lens, fixed aperture, no pentaprism and the choice of bulb or 1/80 for a shutter speed. But it is a SLR for less money than a good bottle of Scotch.

No I kid you not.

Around the time the Konstructor launched, French design graduate Léo Marius designed arguably it’s biggest rival. The OpenReflex requires you to print the camera via 3D printer. The cost of making it isn’t likely to be hugely a saving over the Konstructor as you’ll still need specialised parts like the focus screen and springs. But you get a camera that has a proper lens mount. The instructions can be found here with links to the printing files.

The camera is basic with a fixed shutter speed and no pentaprism. But you can use proper glass and the aperture. Léo’s design uses a Nikon F mount. But in theory another mount could be created.

3. Missing in action but portent of greatness

Next we have the the Reflex.

The Reflex is still stuck in development hell. But it was modestly overbacked by 30% on kickstarter indicating actually enough folk were willing to outlay a few hundred for a midrange camera. It features a unique modular system allowing you change not just lens mount but also the film back mid roll.

It would be a proper SLR with spot metering and is probably the first fully manual focus SLR with a built in flash and LED light.

2020 ended with F6 going but it started with the news off a new SLR. The Nons ML35 arrive a few months back. Finally we have the flawed but endearing Nons ML42. Okay it’s instax and has flaws but this is a functional interchangeable lens SLR in production this year.

The trick is these all offer something new and within a price range that makes production realistic but also that people are willing to spend.

This new crop all offer something new and different. The challenge is to compete for our dollars against the second hand market, which cruelly means you can pick up fantastic SLR bodies for just a few quid. But these have show it is possible.

Nikon logically followed the money in 2006 giving us just entry level and elite bodies. The problem was those markets would saturate, and although I doubt there was a demand for a mid range camera in 2006. But there probably is now and my gut feeling is if the relaunched the F75 or F80, in around 2010. that likely would still be in production. these were relatively cheap cameras to make and gave features the current amateur would want. Unlike the F100 they also were a little more remove from the F6 so not to compete.

That boat has sailed. But the new wave of SLR give us a vision of hope. They’re gonna be more niche but they have to be to compete against buying a Praktica or Zenit for a few quid or a classic like an Olympus OM, Canon A1 or Nikon FE/FM for around a hundred. The Reflex confirms a demand for a well engineered camera. And it’s likely that will arrive some day.

The King is dead. Long live the SLR !

If you fancy a Nikon F series models check out the reviews listed above as well as PhotoThinking’s take on the F3. Alex Luyckx has reviewed all of the F series cameras. You can find links to these on his Review index page.

2 thoughts on “The Last Film SLR the Nikon F6 Is Gone. Long Live the Film SLR”