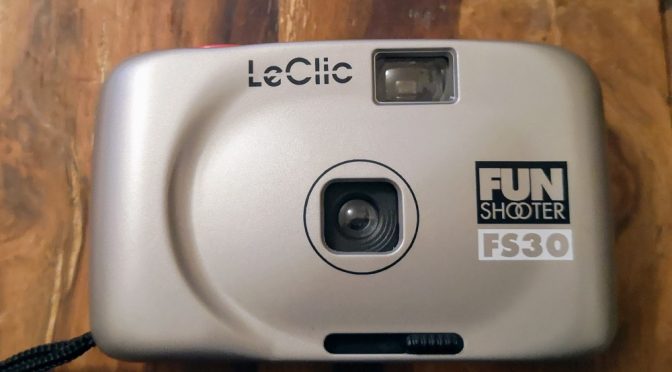 This Year’s Poundland Challenge has flung up some excellent high end cameras for erm… a pound (or less). This is not one of them. Any Poundland Challenge always features a few from the lower end of the market. But that does that necessarily mean awful ?

Today’s plastic lo-fi comes courtesy of Concord Camera Corp. Also known as the Vivitar IC 100. It has attracted the tag of being the Poor Guy’s LC-A but is that deserved ?

Le Clic was arguably Concord’s Flagship brand until they acquired the Argus name . It squarely aimed at the low cost market where it would rival the likes of Halina, Hanimex and Miranda for market share. And the FS30 was no exception.

One of a long line of “Fun Shooter” cameras. It is identical to a version of the Vivitar IC 100 which at least provides some idea of specification. This is pretty likely as Concord were making cameras at their facility in Bao’an, China for a host of other makes including Kodak and Polaroid. Apparently as described in this Lomography review , the IC 100 is known as the Poor Guy’s LC-A at least in the Philippines.

The IC 100 group at Flickr outlines that camera as having a plastic 24mm fixed focus lens. This actually seems about right if you get the ruler out. It has fixed exposure settings of either f/8.5 @ 1/125 or f/11 @ 1/85. The problem was that at least 2 different body styles of the IC100 exist and this may be the spec of 2 different variants. Camera-wiki lists the smaller (f/11) as more likely. Both however give an optimal exposure of EV ~13.5 with 100 ISO film.

If you use those setting the estimated 1m to infinity range actually works assuming you set the hyperfocal distance as the focal point (around 2.25 m dependant on the actual aperture). So this has logically be thought out

Like the IC100 the FS30 appears to have more than one variant. My manual which irritting doesn’t give the spec oddly shows a flash mount whilst my camera has a non removable plastic cover where the base of this should be from the photos.

The film plane is curved but that’s no bad thing for a simple lensed camera like this.

Build and using it

This pretty much all plastic and comes either in silver or blue. It’s no looker and no different from dozens of others soft curved plastic numbers. All in this is a cheap number and an ultra simple camera. However it is not that badly thought out. The sliding lens doubles as shutter lock. There’s a simple viewfinder with no frame markings. And there’s an easy to read mechanical frame counter.

The flim compartment is opened by a slider on the side of the camera. Loading is pretty conventional. There a conventional thumb winder on the rear and to rewind there’s the usually button to depress on the base before using the top plate rewind knob.

I’ve seen people suggesting you use 400 ISO but that’s just rubbish. On a fine day load up with a consumer 200 ISO negative film and you’ll be fine. With most negative films you’ll happily tolerate a range of EV11-15 even down to EV10. As you can see I got away shooting in Scotland just after sunrise in March.

The 400 ISO will be fine as well but really should be kept for duller days.

This is not going to challenge my Nikon Prime lenses. But it never was and you’re really reading the wrong review if you expected Leica like crispness.

This is lo-fi fare and it does that relatively well. Focus centrally is a tad soft but unlike the Minolta it actually maintains its focus all the way to distance although it does start to soften. Concord might make crap cameras but they knew enough to make them optically sensibly with a f/8 or better aperture and logical hyperfocal settings.

Go off edge centre and thing become increasingly softer and aberrant. Even central there quite a bit of fringing and the lens has obvious pincushion distortion. There’s a smidge of vignette too.

Of course the exposure is down to the film loaded. All other settings are fixed. However as mentioned 200 ISO will see you right on most reasonably bright days.

One weird thing is the results and the image in the viewfinder don’t feel that wide. More like 34mm than 24mm !

Basically this is a re-loadable good disposable..

This might be a piece of cheap plastic but it has been logically though out (take note Minolta F25 !). Optically it is no where near the likes of a VUWS. However there’s a certain lo-fi charm to this.

And it would fit in with any Lo-fi shooter or Lomographer. It’s not class leading but it does what it says on the tin and you can get quite good images. I’m not sure it deserves the Poor Guy’s LC-A tag but it’s not bad. Basically this is a re-loadable good disposable if you want an easy comparison.

This a better and more user friendly camera than the Le Clic 170. The closest rival I can think is the Halina Vision XF which has a similar image quality but sports a flash. But I’d personally hunt out a Halina Panorama or it’s clones. Similar quality but give you the option of a removable frame mask.

There are better clinically Lo-Fi cameras out there. Notably the VUWS as already mentioned if you want a killer plastic lens. The Olympus Trip 505 adds a glass lens, metering and motor wind for similar money. If you step down you get the non automatic Olympus Supertrip or the Konica POP series cameras.

Just not the Minolta F25.

Info on this camera is scant but info on the vivitar version fares better. In addition to the sources in the article, Lomo-ish has another brief review. Also Kataan.org has a review of a version with the flash mount.