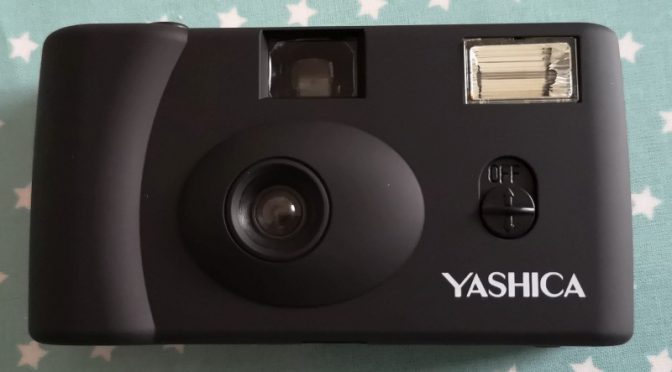 When the new start up version of Yashica launched the Y35 Digi-film camera, the knives were rapidly out before it even launched and many thought it would be sayonara once more.

But they came back promising both film and film cameras and this morning a package arrived from Hong Kong containing both. I’m rapidly wishing they hadn’t come back on the basis of the camera…

I can kinda forgive them for the Y35. Whilst it’s not great there is some fun using a digital camera which does feel like a film camera (admittedly one with no metering feedback or focus controls). Just a shame about the price

When it launched it was clear it was a very basic camera with fixed focus, shutter and aperture. Rapidly folk started speculating that this camera was no more than a slightly tweaked single use camera (and that would seem true). It resembles Japan Camera Hunter’s Kassha camera and Lomography’s Simple use cameras except the spec is different in one important way.

Yashica give the camera a 31mm lens length with a f/11 aperture and a 1/120 shutter speed. Now here’s my gripe. Almost all disposables run with a slightly wider aperture (f/8 to 10 usually) making this camera almost slower by a stop. Granted the Kodak Fun Saver which is arguably the best disposable, runs close with a 30mm 1:10 lens and a 1/100 shutter. But that’s still a slightly bigger exposure and the camera uses 800 ISO film ! So you’re gonna need 400 ISO on load or faster unless you can guarantee reasonably bright conditions.

That said it is similar to spec of the legendary VUWS except the ultra wide lens.

So What Came in the box ?

It came with a strap that helped remind you it was a yashica camera in case you had forgotten and a Maxwell battery. I got briefly excited by the latter as in the 80’s Maxell was a big name (mainly in cassette tape).

The good news is the the other shell is generally quite reasonable. Yashica offered backers the chance to switch from the dull hard plastic body with naff cardboard tacked on to one of 16 rubberised colours (sans cardboard). i went black based on my experience with my bright yellow VUWS clone. It was rubberised and now the dirtiest camera I own. The black hopefully will hide the grot and looks good just now. The shell also feels tough.

However I said generally for a reason. The hinge and the door clasp are hard plastic and look vulnerable. And as you’ll see that rapidly become important. The door has a tendency not to close fully at the bottom unless you watch and that could be an issue on loading as we’ll see.

Go inside and things go clearly down hill. The shutter counter and viewfinder inners are exposed. Like many a disposable and cheap film camera the film plane is curved

So why do you think it’s based on a disposable ?

Apart from the styling ?

Well loading is a dead give away. You insert the film upside down and hook the leader on the take up spool. Once secure and the film door shut, you use a loading winder knob on the base plate. This is identical to the rewind knob on many a pre motorwind camera but here you wind the film onto the take up spool.

So as you shoot the film is rewound back into the film cartridge. This action sets the counter which counts down the shots as you get with most disposables

It would be a fine system but that winder knob feels weak and at risk of snapping. The winding back into the cassette can be good news as any taken shot could be saved if you open the film door by accident. Not so good news if that door doesn’t seal easily your run the risk of flashing your whole film.

Not impressed so far. For the 28 quid I parted with I could have bought 3 Kodak Fun Savers with 39 exposures, a good lens and a better exposure set up and tried and tested film. With some skill you can also reload them. They also come for free postage from some sellers at that money and are well built.

But still the proof if in the pudding and I need to test the camera. So’ve lined up some competition….