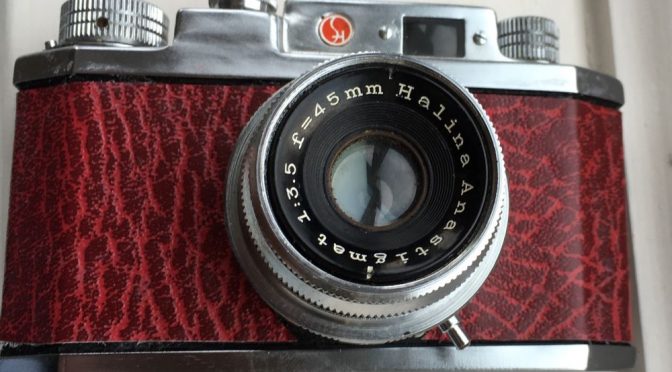 “The nice thing about the Halina 35x is you’re not likely to get mugged for it and if you do you can use it as a deadly weapon.” The poor Hong Kong made 35x is the butt of many a joke and scorn in the camera world.

But this 1959 “Empire Made” viewfinder did sell rather well and has cult following amongst some. So is it really all that bad?

There are a few cameras that invoke strong reactions from photographers. To some the Leica M6 is seen as the pinnacle of almost two centuries of film camera design. Other like the Lomo LC-A provoke desire and disgust in equal measures (it’s the original Marmite Cam). But one camera is more often snidely looked down upon than any others in the same way Soviet Lada cars were to most Westerners. That camera is W.B. Haking’s Halina 35x.

It also is a camera that seems to provoke arsonist tendencies. You’ll be surprised how often folk seem to to want to burn it or cover it in Napalm (am I missing something about this camera eating babies or something) .

The 35x seems to have sold well particularly in the UK where many a 60’s Schoolkid seems to have been given one. Haking also continue to use the 35x title with both the 35x Super and the 35x Mark II appearing. The Super is more an advancement of the 35x with winder lever and better controls, the MK II is more related to the later Paulette series and may represent the transition from the 35x to them.

The body is metal with a chrome plating and looks suspiciously like a pre M series Leica. However it is actually a close copy of the Ranger 35 made by Japanese make Nihon Seiki. This point is strengthened by the fact that both the 35x and Ranger 35 were rebranded under the Micronta brand (Micronta 35x and Micronta 35 respectively). Haking also sold the 35x under the Sunscope brand.

The shutter sits rear of all the lens elements. The manual indicates it syncs with M type bulbs at 1/25 for flash via PC sync. There’s a cold shoe mount, tripod point and it’s cable threaded. The lens barrel has rings for shutter, focus and aperture. Unusually the aperture ring is furthest out and turns on focusing. The Focus ring is marked in Feet from 3ft to infinity.

Depending on when the camera was made you might need to manually cock the shutter a la Smena 8M. However my one is a later self cocking model.

The using it as a weapon is no joke. The main body is solid. It’s not as heavy as some cameras from earlier eras but you’d certainly give your would be mugger a good wallop with it. The body has a black embossed card to resemble leatherette which you often find peeling off. This is why my one is recovered in vinyl.

The lens barrel is not so tank like. The camera has simple mechanics but is prone to issues with the control rings especially focus. I’ve seen reports of stiff, loose and even rings that have just come off !! Mines had an unnerving wobble in once you got beyond 20ft

If buying watch out for fungus. This is the 3rd 35x I’ve bought and the only one not to have a lens hooching with the stuff

The camera film compartment is opened by turning a switch on the base & removing the whole back. Loading is okay but it has one of those take up spools with a small shiny metal strip to slide your leader behind that never seems to hold the film enough. You’ll need to set the counter once loaded. The viewfinder is small and minimalist

There are various versions of this camera. They often vary over the rewind button position. Mine’s has one on the base but others have a button on the top plate. The rewind knob is small and a bit uncomfy.

A word of warning. Whilst I had no issues with rewinding but others have done when they get to the end of the roll and half wind on before getting stuck trying to rewind. I suspect this an age wear issue with the older models but be conscious of this. In the worst case if it happens you’ll just need to unload the film in film changing bag or if you don’t own one shut the curtain in your bedroom ideally at night, close the door and get the lights and unload your camera under the duvet with a few blankets on top. The issue is the winding sprockets so should be easy to open back and gently respool film.

The optical weakness of the lens does become apparent. The failure to coat the middle element doesn’t help as Kosmofoto’s Review of the 35x explains. I’d agree with Stephen Dowling’s view re the lens becoming soft at below f/8 so by and large I tried to shoot at f/8 or above on it. Here centrally in closer shots it isn’t bad although things fall off to the edges fairly rapidly.

That brings it’s own issues of vignetting which is noticeable but just and to some of you that will be a boon. There’s some pincushion distortion but not bonkers.

The camera is prone to flare (probably why it was sold with a lens hood). You also get some chromatic aberrations. It isn’t great on infinity long shots but then again my barrel seems quite loose at above 20ft.

However it really depends on what you’re using as a yard stick. It looks weak compared to an Voigländer Vito or Olympus Trip 35 but then so did a host of late 50’s and early 60’s budget European made cameras. A good example is the ubiquitous Ilford Sportsman which is probably worse than the 35x optically at f/8 plus. Whilst the sportsman is better made, it’s also crippled by a weirdly missing 1/100 shutter setting.

There’s a kinda Vintage appeal in the images you get.

I wouldn’t pay more than a tenner for one of these (before postage). And weirdly you’ll end up paying this for a reasonable one. Worth getting a seller who offers returns as the fungus can be a real issue.

The Halina 35x is not a great or classic. You will not and should never find it in a top ten list of classics. But it actually is not as bad as the jokes and the incendiary views would suggest.

It’s rudimentary, heavy and can have issues. Optically my Superheadz Wide & Slim plastic lensed camera is better. But this does have a range of control for exposure.

It’s on the par or just lagging behind many a entry level viewfinder of the late 50’s and early 60’s in terms of results. There’s nothing to make it stand out however and the cheap construction might make you want to look elsewhere. It however may have appeal to Lo-Fi shooters.

I’d probably go for a self cocking model like mines and watch out for Fungus if you did want one. Also keep in mind the potential rewind issue.

In short better than an Ilford Sportsman bar build quality.

The Late 50’s and early 60’s are littered with many a simple viewfinder from Europe and Japan. As I’ve mentioned these are often little better but better made. A typical one are cameras based on the Dacora Dignette such as the Ilford Sportsman which I’ve already discussed.

Japanese cameras would come to dominate with automated cameras during the 60’s with early models like the Fujica 35 Automagic but before that you can find things like the Yamato Pal Jr which looks very similar to Halina own much improved version of the 35x, the Halina 35x Super, which I reviewed earlier.

Viewfinders from Agfa Silette’s series are a slight step up. If you what to go for much better still some of the German made Kodak Retinette viewfinders are worth. And then there the Delights of the Voigtlander Vito.

If you like the 35x but wanna go even more Lo-Fi, Haking made a simpler camera just for you. It actually is better looking and is a hommage/rip off the a Fujica of the same name. It’s the Halina PET. Looks great but is much simpler and has a worse lens.

3 thoughts on “The Lada of The Camera World OR NOT ?- The Halina 35X Review”