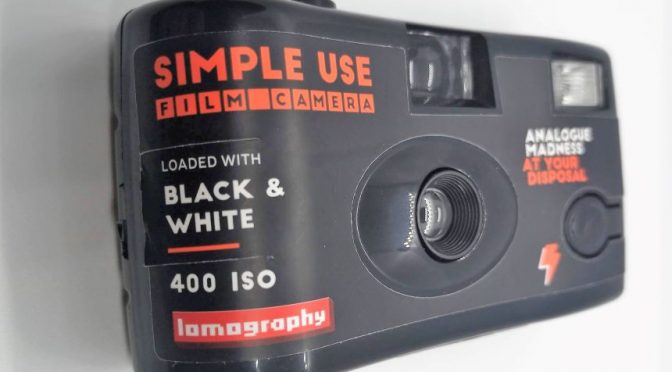 I’ve ended up over the past couple of years reviewing quite a few single use and reloaded disposable class cameras. But they all come with issues. But the camera that started the reloadable disposable thing off finally arrived on my mat, And there’s a good reason why this is one of the most regarded cameras in the class.

There’s some debate to where disposable cameras actually started. Many credit Alexander Pope Whittell back in 1886. Whittell basically came up with a a single frame camera with a cardboard body. You literally tore open the camera to get to the single glass plate or sent the whole thing off. Selling it for 25 US cents in an era when cameras were expensive it enjoyed some success in a five year production run. But cheaper cameras were on the way notably from Kodak.

But after WWII there was a resurgence with 35mm cameras made out of cardboard with a bit of plastic. These limped on into the 70’s but with the likes of Haking, Hanimex and Le Clic making cheap plastic re-useable cameras interest dried up,

The Rise of the Modern Disposable

We’re in the the third wave of Disposable cameras a wave that has lasted from the mid 80’s, survived the rise of digital and will probably be still around when I’m pushing up daisies. It was triggered by Fujifilm. In 1986 they launched a plastic 110 disposable in Japan which was petty successful. The company realised whilst their domestic market was awash with high end camera gear, there wasn’t really any lo end cameras. But most people credit their US launch of the first 35mm quicksnap disposable as the birth of this new age which tapped in to this zeigiest

And we still lap ’em up. A weird analogue survivor that has outlasted most film cameras.

Okay but what makes a reloadable different from a single use ?

People for years have twigged you can take apart a disposable camera. This is not without risks as I discuss here. But if you’re gonna do it use a Kodak Funsaver is my take home as it’s relatively the safest and easy to reload. Just note my use of the word Relative.

To most in 2017 Lomography joined the dots. There was clearly a demand for this in the Lo-Fi community so why not create a disposable that you could reload. And lo the Simple use was born. These cameras can seem very similar to the plastic cameras like the VUWS of the later 90’s and noughties. However they differ in one major way which defines them as a class. Just like their disposable siblings you wind the film back into the cannister why shooting.

But Lomography had been there before over a decade before with the Lomolitos. This forgotten Hors d’oeuvre was mainly sold as a disposable but lomography hinted you could reload. But they din’t crack the zeitgeist until the simple use came along

This was popular enough that both the new Yashica and Hartman (Ilford) entered the market. I’ve reviewed both the Yashica MF-1 & Harman Reloadable before.

So what do you get with the simple use ?

Unlike its two rivals – Lomography preload their camera and market it as a disposable that you have the option of reloading. Lomography sell versions with different films. At launch you had the choice of three 400ISO films – Lomography 400CN, Lomography purple and as here Lomography Lady Grey B&W. They’ve just added a 4th version with Lomography metropolis film.

The Joys of Specs

The cameras are essentially the same with one minor difference. The colour film cameras have a set of gel filters for the flash and the B&W doesn’t. To some of you that will be a odd omission for a camera that you can reload. But for some of us including me that’s the reason I picked this not the others.

Under the hood you have a full frame 35mm plastic camera with a fixed focus 31mm lens. That has a fixed aperture of f/9 tied to single 1/120 shutter. Pretty much in the range of disposables and the newer reloadables. As you’d expect for the class the film plane is curved. Flash is manually activated by holding a press in button on the front à la kodak Funsaver.

That flash has a 15 second recharge time and optimal range is 1-2m. It’s powered as usal by a single AA that come included. Lomography rate their focal range from 1m to infinity. However most DoF calculators will suggest (if the lens is focused at the hyperfocal point) a range of 1.8m to infinity.

So it Kinda nails the disposable look. Look this thing is a lump of cheap plastic and isn’t gonna win awards in the looks stakes. The B&W is the most neutral of the lot. They all have the same black plastic body but the others have more day-glo stickers. That said the B&W ain’t subtle but I guess you can peel things off. Yashica’s more simplistic MF-1 wins the looks stakes.

But it isn’t as solid as the Lomography one. The simple use is actually not bad for cheap plastic and feels more durable than any of its rivals.

What is there to say.
This is a simple camera with no controls other than turning the flash on. I’d preffer a switch rather than holding down the button but it is class standard. the viewfinder is okay but simple and the film is advance by thumbwheel. it all works okay and erm.. that’s it.

The flash is slow to charge and Lomography’s own estimate of 15 secs is about right so go make a cuppa while waiting.

As is typical for this class the camera is loaded by winding the spool out first into the camera and as you shoot it winds back into the cartridge. unloading is just a matter of sliding the door lock.

Like its rivals you load by winding the film on to the loading drum. The system looks similar to that on the Yashica and the Harman. It is much easier to load than the the Hraman and doesn’t have the butt clenching fear of exploding plastic you get with the Yashica. It wins hand down.

So if you were expecting Killer sharp optics from a plastic lens. I’m sorry you’ve come to the wrong post (try here instead). This is not the camera’s strong-point but to be fair its results are around class average.

The camera is better focused centrally and falls off to the edges badly with notable softening and diffraction. There’s quite a bit of pincushion radial distorting too.

It trails behind the Kodak Funsaver single use and Harman’s reloadable. But it is as I’ve said class average and I’d say from a clinical perspective the Yashica MF-1 is a smidge better. Centrally it’s much better in the 1-5 m zone. I think they may have chosen to focus closer than the hyperfocal as it is almost pleasing here. It falls off the further you get away with it being soft at over 10m.

In the Middle of the Covid-19 Lockdown is not the best time to quote prices but we’ll assume all cameras are equally affected. Interesting the Simple use is the cheapest camera in its class by some margin. It can sourced on line from sellers like Analogue wonderland from £17.50 (B&W – the colour models cost about £5 more for some reason)

For Harman’s offering you’ll need to part with around £30GBP. Granted you get 2 not 1 film but I could pick up almost 3 extra film for the B&W simple use.

The Yashica is much harder to get. I can’t find anywhere on the internet (other than opertunists on the Bay) selling this. The company’s own website lists all models as out of stock. The cameras with one film are priced at HK$278.00 (exactly £27.80GBP at the time of typing). This makes this the most expensive choice before you factor in shipping. It also only comes with a 24 exposure film not 36 making it per shot more expensive still.

The Kodak Funsaver has gone up in price a bit and now you’ll struggle to get one online for less than a tenner including postage.

This is the best of the reloadables on balance. Granted the Harman is actually optically a much better camera but f*&k it’s a pig to live with and best in class optics isn’t what this class is about. The simple use is about average optically but much better to use.

It does not match the best disposable optically either. The Kodak Funsaver is way much better and is the easiest of the real single uses to reload. But the Simple use is easier to reload and despite Kodak’s build quality, it will outlast it. It is better than many other single use cameras optically but shares their look.

Lomography need some appreciation for launching this class. But did we really need it and the weird drum loading that defines the class ? If that thing floats your boat you can use the Funsaver but this is easier to live with. I’d also argue buying a second hand plastic cam from the 90’s or nougthies is better but with the same lo-fi appeal. As well as being easier to load.

That said this is the best balance in its class.

Other sources & some alternatives

The Darkroom.com has an excellent comparison of most of the branded single use & the simple use cameras. Camera Go Camera has a great review including shots of the reloading process, For information Lomography have a dedicated microsite to the simple use.

This may be the best built reloadable but I’d honestly suggest a plastic standard camera as an alternative. The Halina Panorama in all it’s guises has it’s own look. The VUWS & its clones are probably the most well regarded lof-fi plastic lensed cameras. Both feature in my top 10 plastic cameras alongside the Funsaver.

Lab processing of Simple use films done by AG Photolab in UK. Scanning at Med res.

7 thoughts on “Reloaded And Ready – Lomography Simple Use Camera Review”