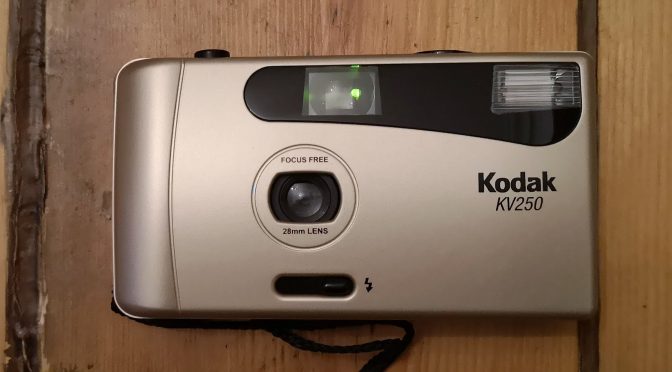 So this is a review of a Kodak camera then ?

Well not quite. This was never sold by Kodak, the name here has just been licenced by Vivitar. Its actually just a Vivitar T201 Lx under the hood a camera that has a cult following. But is that deserved ?

This is a lo-fi plastic number. The Kodak version IMHO looks better than the original vivitar with the black surround fooling you into thinking there might be a AF sensor or exposure metering. But nope this is fixed everything stuff. The plastic 28mm lens has a single f/9 aperture and is matched to 1/125 shutter speed. The lens has no coating and I’m not sure but I suspect a couple of elements.

The manual indicates a focal range of 1.2m (4ft) to infinity. This isn’t far off theoretical Depth of field (1.49m to infinity if the lens is focused at 2.94m). Flash is recommended for use 1.2-3m with no differential for film speed.

This is basically the same spec as your average disposable camera and like them has a curved film plane. You trigger the flash manually. And there’s no low light warning system to tell you to put it on. You only need the single AA battery to power the flash – the camera will work fine without

A sliding cover has 3 setting closed (and shutter locked), open & flash on. The camera has a semi easy load system (no slot but catch film on sprocket on take up spool. There’s a flimsy catch on the rear door to open the film compartment. There is a standard thumb winder and traditional rewind knob (you need to depress the button on base first to use). Unlike the VUWS the camera feels happy with 36exp films.

There’s a small mechanical counter and mines came with strap and 2 expired Kodak Ultramax films. The film expiry date (2010) and the packaging having © 2006 suggests mines was made 2006-2008. 400 ISO film provides the best flexibility given the fixed shutter and aperture but in good weather you could get away with 200 ISO or even 100 ISO.

The camera is pretty easy to use and unlike a disposable it handier to have a setting that keeps the flash charging rather than having to constantly hold down a button. A green LED tells you flash is charged. The viewfinder is just basic with no gridlines.

I shot it with 2 rolls of film. I loaded in some Ars Imago 320 (aka Foma retropan 320) but something went wrong as the negs came out scratched and grossly under exposed. I’m thinking film rather than camera issue as a roll of fresh in date Ultramax came out as I’d expected.

This really should have been part of my recent group tests of the Yashica MF-1 v Disposables. This really is pretty much a re-loadable disposable camera.

Focus is soft. Acceptable in centre from around 1-10m but falls off beyond and to the edges. There’s a smidge of vignetting and the lens suffers from radial pincushion distortion. Fringing is really evident on long shots

There is no unique characteristics here. This ain’t no VUWS with flash.

Weirdly given the numbers of reloadable disposable on the market, you could launch this today. I’d rank this about the same as the Yashica MF-1 and it feels more robust. The camera isn’t commonly seen in the UK but the T201 is. I got this for £7.70 but as it was a US seller I ended up paying almost £25 once you added postage in. Sounds a lot but did come with 2 films.

This is mediocre stuff but might suite those of you lomo inclined. It is no worse than a disposable or the MF-1.

But I’m left feeling with all of these – spend a bit more and get a whole better camera. The VUWS is way better optically and has lomo cachet but is flimsier and lacks flash. The Hanimex 35SE can be got for peanuts and offers a lot more with retro styling. For VUWS money you can also get the excellent Konica Pop. There’s also the legendary Goko UF (if you can find it).

Little else out there on the Kodak version but the T201 is reviewed by both Saturated Imagery and dreamyoceans.