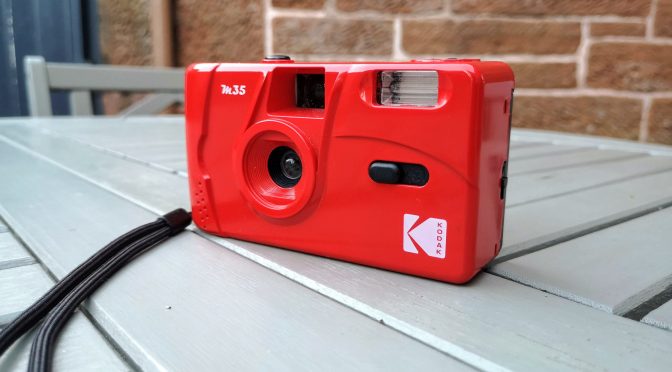 I’m Sorry I goofed about this one. The M35 launched in a variety of funky colours in 2019. A simple single element plastic camera I kinda missed it at the time. I assumed it was just another version of the Harman reloadable my least favourite reusable disposable. Turns out I was wrong. This and it’s twin the M38 are a cut above the reloadables and may now be the best value model in it’s class.

Sorry Sino Promise in the words of someone else- I made the wrong decision and I apologise for that. This is not a clone of the Harman nor is it a reloadable disposable. It is yet another reasonable simple fixed everything plastic camera almost identical in performance to the Dubblefilm Show. And is probably made in the same factory.

At this point you may be wondering why I’m not saying sorry to Kodak. Trust me I do enough of that every day by wasting their film on crap shots. But actually this isn’t a real Kodak camera. Although Kodak in the last 40 years have had others make cameras for them, this isn’t even that. Sino just licence the name.

Kodak are clearly happy with this as the camera is on their website alongside the M38 which just seems to be a two tone variant with an upgraded flash.

The M35 & M38 both are plastic bodied simple use cameras. Lets be honest, the design is not what dragged you here. They are identical Harman Reusable barr colour and not having the naff sticker. At least the day-glo colours have a bold impact.

The M35 comes in at least 6 colours with white logos. You can choose between red, yellow, green (light), purple (more pinky – closest colour is Pantone Viola), sky blue & candy pink . The camera I got came just in a blister pack with strap and instructions.

The M38 looks near identical except there is a usually white ring around the lens. It’s available in black, blue, Flame Scarlet (red), Yellow and white (ring is yellow and logos are black). As we’ll see it differs slightly in spec.

Shiny Plastic but solid enough for the price. There’s a small decorative grip for your right hand but if you use you run the risk of fingers appearing in frame and trust me that happens .

They have the same core spec with a a 1 element plastic 31mm 1:10 lens matched to a fixed shutter of 1/120. the film plane is curved to improve focus. The instructions suggest an 1m (3ft) to infinity focal range.

A single AAA battery powers the flash. I was struggling to understand why the M38 weights more (116.5gms v 100gms of the M35) but the flash appears upgraded with the capacitor rating rising from 70 micro-Farads (uF) to 120uF. Flash for the M35 is rated for use 1-3m.

Turning the flash on also moves the Waterstone stop aperture out of the way putting the camera to the widest aperture f/10. I’m guessing the narrower aperture is somewhere between f/11 & 16. You can exploit this with or without flash (just drop the battery out) to give you little bit more exposure as light drops but at the expense of sharpness.

It has standard loading with access via a catch on the side. There’s an easy load uptake spool – simple hook the second sprocket hole on your leader over one of the small hooks and wind on. The film plane is curved. It has a thumbwheel advance and the shutter is cocked by winding on. the winder doesn’t cock per se but there a sprocket above the film plane that is turned to do so.

Rewinding is by standard rewind spool following depressing button on the base. There is no tripod point, cable point or lens covering.

Why the confusion with the Harman

The Harman appears made in the same factory with same body shape design, 30mm 1:10 lens but it isn’t. The Harman has reloadable disposable drum system to load which is just awful.

What’s the thing with the Dubblefilm Show Then ?

Well – I’m gonna say it. these are the same or nearly the same camera.

Take a look at these shots of the M35 alongside the Dubblefilm and the newer Agfaphoto Analogue Camera which appears to be another clone. The new Ilford Sprite-II also looks similar and mirrors the Agfaphoto spec but i haven’t been able to source.

Okay these are quite stylistically different but look at the lens, viewfinder, flash and flash switch position.

But when you look elsewhere it becomes quite apparent these are at least closely related if not the same bar styling. The top plate only differs slight with the Dubblefilm having a different sized button and the cameras differing subtly in the moulding. But everything sits in place. The rear and base gets much more obvious

Inside all is the same too.

The sides differs but only due to styling and wrist loop position. Worth noting the M35 and Agfaphoto share the same wrist loop.

Interesting the 1 sheet instructions with the Kodak and Agfaphoto use the same icons. The Dubblefilm used Jose Roda to design theirs so obviously doesn’t match.

Looking at the 4 cameras you’d be forgiven for thinking they have the same lens and aperture set up. Objectively they look the same but they all have slightly different specs. they all open up wide in flash mode

I’m actually wondering if this is down to averaging ? Could the wide be somewhere just over f/9 and is the lens actually between 31 and 32mm ? Dubblefilm maybe rounded to nearest full stops (f/8 1/125) ? And is Kodak, Agfaphoto & Ilford rounding in a slightly different directions ?

It’s hard to see much difference in daylight over the Dubblefilm show’s image quality. The image is better than a disposable and centrally not too bad for a fixed focus single element. Although it softens on the long shots not too badly. It softens rapidly to edges.

Both cameras have some chromatic aberrations which are more noticeable in colour shots but again better you might expect. It has obvious pincushion but again no worse than other cameras in this class.

But there are times of sheer brilliance where you doubt you’d been shooting a single element plastic lens .

On the downside, It flares in bright light. In direct bright conditions that’s not in a good way but with thin cloud or it can be fine.

Also as light drops so do these cameras quality. You’ll get good results in bright condition s with 100-400 ISO film but even 400 ISO struggles when things cloud over too much. turning on the flash helps not so much with fill in but opening up the aperture. But you loose image sharpness.

Oddly it’s only Ilford that have given a sensible exposure chart for these cameras. And I’d agree with it here.

The reason the fill in doesn’t help is the flash is from the school of chocolate fireplaces. It is possibly the weediest flash I’ve use. You need to be no more than about a metre and a half away for to be useful. No wonder the M38 packs almost twice the punch by capacitor size.

This places it as one of the cheapest new cameras you can buy and if you can live with pink even cheaper than some single use cameras.

It’s construction rival look better. Costings Vary. But the cheapest of the Dubblefilm like cameras is the Agfaphoto which I sourced for £22 plus delivery from Kaleidoscope an off-shot of the UK Catalogue clothing company Grattan PLC. It’s available in 3 versions with only differing with the faux leathette in red, brown and black. It comes with a nice velour pouch. The Ilford Sprite 35-II seem based on this stylistically coming in all black or silver/Black styling but costs almost twice as much (£39.95GBP +P&P).

The Dubblefilm is more expensive still at £50 or more. Cheapest UK stockists I could find were analogue wonderland. You do get the designer instructions and erm.. case but personally I’d save a few quid and track down the generic Vibe 501F which is basically the same stylistically but for half the price.

Lomography’s simple use cameras deserve a mention here. If you can live with loading mechanism this is the best in it’s class made today. The Harman reloadable has a same lens and looks (bar naff sticker) as yhe M35 making it the best reloadable optically. But is let down by the awful (even by reloadable standards) loading mechanism.

From the mid 70’s on cameras of this ilk were produced long before a digital sensor was a thing. The list is legion of cameras that had a similar or marginally better spec. Notable killer cams include the VUWS and it’s clones and the Hanimex 35HS.

Again I need to apologise. I was wrong to write it off as a clone of the Harman Reloadable. It shares the same lens and looks but in day-glo colours. But in fact is a class up and out with the shell the same as pretty much every recently released by film producers cameras.

But this is as good as any in the current crop of lo-fi plastic cameras made by or bearing the names of film manufacturers. That’s because it is mechanically and optically the same. They can be startlingly good in bright light with 200-400 ISO. They struggles as light fails though you can drop the aperture a bit by using the flash mode.

The M35 does worse here than my Dubbblefilm due only to the flash. It is telling the M38 almost doubles the capacitor power.

But beyond that there is nothing to separate this class of camera (well they’re basically the same). if money is tight the M35 or better still the M38 might make sense. But let’s be honest beyond the funky won’t lose that in a car park colours they aren’t exactly pretty. So fair enough you can buy 2 M35 and some cheap film for the cost of the Ilford & Dubblefilm, they look better. And with the Agfaphoto camera being almost as pretty but just a few quid more than the M35, it’s down to personal taste.