This year I managed to pick up a Goko UF a pretty rare fixed focus plastic flash shooter with a patented Universal Focus system which promises the ability to remain in focus both near and far.

But how does that work in practice and with a camera with a fixed aperture ?

Rather than just look at it in isolation,  I shot it against my Pentax pino 35 another fixed focus flash compact but with a glass lens & some manual aperture control. So how does it the stack up ?

Goko isn’t a name you’re likely to have heard of but is still an active Japanese company. The UF was the first of their Fixed Focus patented Universal Focus system which purports to allow a fixed focus lens to shoot in focus at a range of distances. Oddly reading Goko’s corporate and imaging division websites you wouldn’t know it existed with their focus on the UF-2 which was used as the basis for 4 million+ cameras under different names.

Lens-wise it looks plastic and the f/5.6 is a worry. I make an assumption that the shutter speed is around 1/60 to 1/125 as it doesn’t seem to vary and neither does the aperture except when you turn the flash on (a manual  change of aperture occurs). I have no idea of the film this camera should be using but suspect it was 100asa but it seems okay around 200asa. 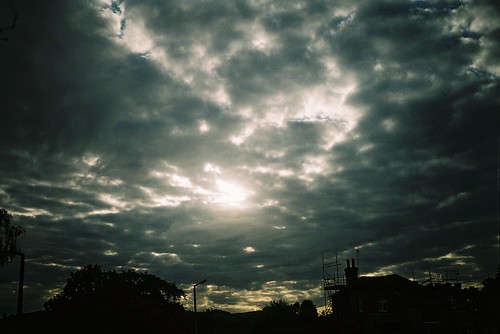 On paper I’d worry  with that aperture. Most cheap fixed focus cameras will try to use as high a aperture as possible to improve their depth of field.

The body is plastic but fairly neat and whilst no design classic is the more likeable of the 2 on test. There is a sensor which triggers the low light LED to tell you to put on the flash but it does nought more. 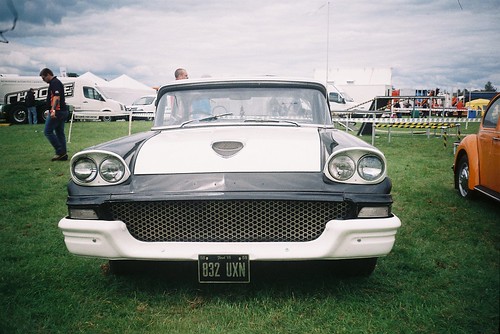 Odd thing that Universal Focus thing kinda works. Look at the car shot above. Nothing special with that I here you say you’ve shot at the sweet spot for fixed focus of a few meters (and certainly this camera is blurry below about 1.5m). But look beyond and remember this is f/5.6. Exposure seems okay too 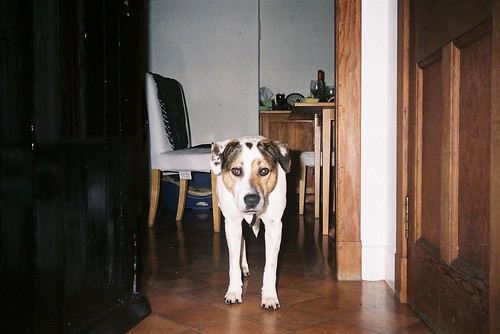 Flash can be little slow to power up first time so worth priming but works well. You have to turn on and off manually with switch which is a curse and a blessing. Other minor gripe is viewfinder slightly off kilter.

Just taking the specs you would think the pentax Pino 35 should wipe the floor with the Goku. The Pentax has not only a Glass triplet lens but it has an adjustable aperture from f/3.8 to f/19. The camera has a couple of rings around the lens one sets for the films speed and the other allows you to adjust the aperture to match a series of weather icons or flash distances.

The day started dull in Carlisle with these street signs. The Pentax edges it here. The exposure is better and slightly crisper both close and at the more  distant house opposite but the Goko just trails behind

Later in Lockerbie things were still as cloudy but even less between them although again I think the Pentax edges things in sharpness at distance and exposure but it gets less.

Overall the pentax had the edge but in fairness to the Goko the pentax was set to 200asa and I suspect the Goko is geared for 100asa. It was tight and in some shots like the mural street shot later that day when the sun came out. It starts to become a matter of debate.

Overall a rare but worthy basic shooter. Just pipped at the post by the Pino but only just given it’s plastic lens and spec. However you’ll be stuck with 100asa or 200asa with it.