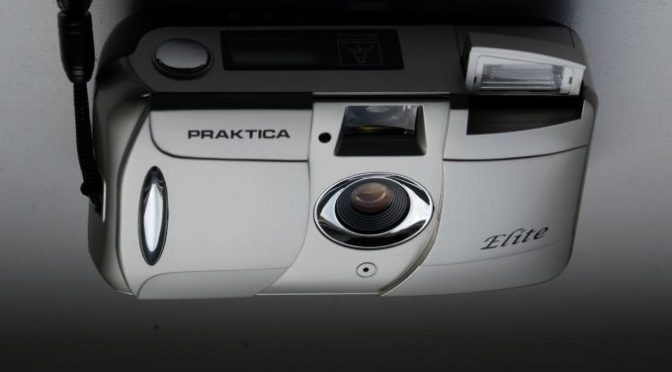 Praktica is most associated with the East German 35mm SLRs that many a Western teenager cut their photographic teeth on in the last third of the 20th century. But by the end of the century, the Praktica brand was also seen on a host of forgettable compacts. But the Elite is more than just forgettable, it’s a bit of a rabbit hole mystery.

The Praktica Elite pops up now and again in online sales. But very little information exists about it. Most information available online comes sales pages with this Depop one which arguably has the most information. That featured the Box which claims that it is a “Deluxe Fully Automatic Autofocus Camera”.

But there’s more to learn via a rabbit hole that takes us from German reunification to the Far East to the American Mid West.

You probably know the name Dresden from the terrible firebombing the city suffered at the height of WWII. But in terms of photography, Dresden’s history is rich. It was one of the major camera making cities of the 19th and 20th centuries.

It is where Zeiss Ikon made the legendary Contax cameras and many notable pre WWII cameras arose. However Post war, it found itself on the Soviet side of the divide

From the ashes rose a conglomerate company that would become known as Pentacon. This was named after the contax brand and the pentaprism that Zeiss Ikon first developed. It was huge company and successful in the decades following the war. Over 8.5 Million cameras left its Dresden Factories and it is said to have had a 10% share of the global camera market at its peak.

Pentacon made several legendary cameras like the Pentacon-Six & Contax S series. But the company is best known for the Praktica SLR cameras.

Sadly Pentacon was struggling in the 1980’s and was actually liquidated the day before German reunification. The name lived on thanks to Heinrich Mandermann. Cunningly, he waited until the firm was liquidated before buying the assets at a knockdown price.

Today, the Praktica name lives on via a British company who hold the rights and sell entry level digitals.

So where does the Elite come in

Under Mandermann the company continued to make Praktica B mount SLRs. But Pentacon also started selling compacts like the Elite. These were mass produced in the Far East. Many are basic numbers often fixed focus. The Elite looks better and offered AF, aiming for a more discerning buyer.

But beyond that little is known about the Elite.

But then by chance I came across a near identical model.

I was checking through a turn of the century Praktica distributor’s website. Goldline USA Inc was a family run company based in Marion, Illinois. Their website dates from the early 2000’s and their office is now a healthcare facility. But they did sell Praktica and Exekta branded cameras. Just sadly not the Elite

But one of the cameras on their site showed an uncanny resemblance to the Elite and they had the original Pentacon flyer.

The CM 1000 is a very similar looking model and I suspect very similar – either a later or different spec’d model from the same Chinese OEM manufacturer. Their LCD screen and button layout is identical with the exception of the CM 1000 panorama switch.

There is also a CM 500 model which is identical to CM 1000 on exterior (for photo see this one also sold on Depop).

So you get a plastic clamshell body with sliding door. That door automatically triggers a with a pop up flash (like the mju II series cameras). It isn’t the msmallest compact but pleasing enough with the Pentacon Logo taking pride of place top and bottom. The top mounted LCD shows shutter count, battery, flash setting and if timer triggered. Not that you need to be told that the timer is triggered..

Has CE mark on base indicating made in China (ironically it keeps mentioning Germany in Pentacon logo). Reasonably well screwed together

The Depop box clear states this is an AF camera.. Now I’m guessing it uses an IR system. A Red LED on the front always comes on irrespective of the flash firing (even when flash forced off) before shutter opens. The CM 1000 uses a IR sytem. More tellingly it has a shocking just 2 focus steps. The Elite as we’ll see doesn’t seem to have many more.

You get no focus confirmation. Nor does it lock if you are too close – could trigger the shutter lying the camera face down. There doesn’t seem to be a a AF lock either as the shutter button travel is small and has no real resistance feedback. The CM 1000 has a rated focal range from 1.5m to infinity.

You get a simple Albada bright frame viewfinder. This has parallax marked frame lines and a marker for AF target. There is no information in the finder beyond this. The CM 1000 is noted to have a 80% field of view. A single LED to the right of the viewfinder tells you flash is ready.

Has “electronic programmed shutter” according to the box. That’s all that is certain. However the CM 1000 is known to have just 2 speeds 1/60 or 1/125 (plus 1/6 in night mode). This limited range would suggest some movement of the aperture but it isn’t clear how much.

DX coding automatically sets the ISO. There are only 2 pins. Given the camera type, this suggest the camera sets for just 2 setting. These would be 400 ISO and 100/200 ISO. Funnily enough that’s how the CM 1000 works.

Auto mode by default. you can switch to fill in (force on), off and night sync modes. Without a manual it is hard to guess how the latter works

There’s a built in electronic timer that can double as a personal attack alarm as the tone is so loud. I wouldn’t trigger around armed police.

Power is by 2 x AA batteries. These power a motordrive as well as the electronics.

There’s a tripod point on base

Load with 2 AA batteries in compartment behind strap point on right side. My battery compartment popped open easily enough but says open with coin. Flim loading is simple just insert film and pull leader over to the far side of the take up drum and close the door.

Slide the cover open until flash pops up. There is a single LED by the viewfinder which lights green if ample light or when the flash has had time to charge. Shutter appears locked until this occurs. There is no feedback re focus. The delay from pressing the shutter to the shot is almost digicam like.

The small LCD on top plate gives shutter count, timer and slash settings info. The motorwind is about average noisewise but need to manually trigger for rewind. If you have the misfortune to hit the timer button and you don’t get shot, you can deactivate it by simply closing the clamshell.

All flash settings reset to auto when you close the camera.

Starting with exposure the camera seems reasonable judge with 100/200 ISO film but tends to over expose in bright light at 400 ISO. If the camera is essential the same spec as the CM 1000 AF then that isn’t a suprise. I’d guess the minimal aperture is at best f/16 and more realistically nearer f/11. With a top shutter speed of 1/125, the camera is going to over expose by at least 2 stops with 400 ISO film in bright (EV15) sunlight. Hence in bright light modern 400ISO negative film looks washed out unless in the shade.

Whilst shooting slower film helps from an exposure point of view, optically it’s the reverse. The lens irrespective of speed softens off centre and suffers from some barrel distortion. Vignetting can be noticed at time but no worse than many a camera in the class. It does not flare well.

Centrally with slower speed film it become clear there are just a few focus steps. It’s hard to confirm if there is just 2 like the CM 1000 but if there are more, we’re not talking many.

There is definitely a sweet point around 3m. Nearer things soften a little then fall off rapidly below 1.5m. I’m struggling to identify the second but I think it’s somewhere between 5-10m as focus falls off and with 200 ISO film things get unusably soft on long distance shots. With 400 ISO film there is a marked improvement for long focus and overall sharpness in good conditions. That’s down to narrower aperture, I suspect. But in bright light the over exposure softens things.

Elite this is not. Now it may be a better compact by Late Praktica standards. But Mju owners don’t really need to be worried. In fact I’d say the Olympus Trip 51AF does a better job than this (except for the almost always on flash). However it isn’t awful and it is better than a few other Prakticas compacts that I’ve tried like the SP301.

But the Elite is another sad model in the dying days of a once good name. Its restricted exposure range and limited focusing in some ways make it worse than fixed focus cameras. My Olympus PEN EE-2 wipes the floor optically and from an exposure point of view despite being a fixed focus half frame with a selenium meter, Now that’s a classic but my plastic VUWS clone is also better.

There isn’t even much for the Lomo crowd here either.

If you want a cheap almost disposable fixed focal length compact buy yourself something like the Olympus OZ-10, Canon Sure Shot AF-7s or even better a Ricoh FF7 or 9. Alternative you can pick up a cheap but good Pentax Espio or Canon Sure Shot zoom like the Espio AF Zoom or Sure Shot 60.