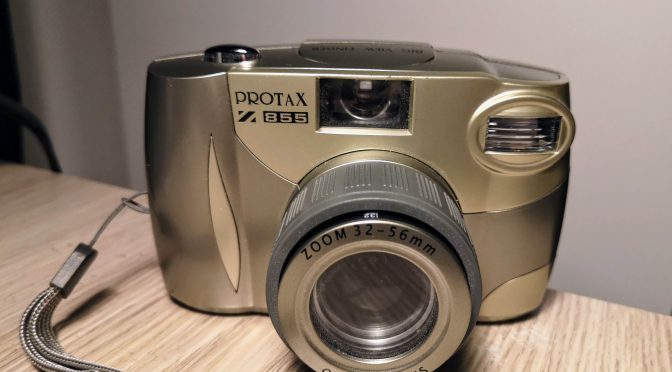 The Protax Z 855 sounds like a claim form for the HMRC/IRS that you supplement this year’s tax return with. But in reality it’s one of the weirdest named and designed toy class cameras I’ve ever used with a fixed focus zoom lens and fisher price digital looks. But just how bad is it? You might be surprised.

You’d also be forgiven for think it’s a trn of the century digital with styling. But nope you have a 35mm with a zoom lens but fixed focus

Protax ? bet that doesn’t do well in an Election year

Hey ! leave the puns to me. I’ll have you know there are several Protax cameras out there

So is it some brand I’ve missed ?

Trust me you’ve been lucky.

Protax is a name associate with a range of Taiwanese and Chinses made cameras. I’m not sure if they are actually made the same company or just a used name.

The earliest Camera I’ve seen is the Protax 2000

There seem to be a range of simple fixed focus cameras predominately made in Taiwan. I’ve seen the following

But it gets more perfidious with digital. There are some early cheesy looking handgrip style cameras that were vogue at turn of the century. But these days Protax is widely used on a range of overpriced digital crap, that trade on being professional SLR. Notably the set of models worryingly sounding…ahem very similar to Nikon models. So we have a D7000, D7100, D7200 and a D7300 as well as an older series that went from D3000 to D3300). They aren’t DSLR and have an overinflated interpolated MP rating.

Blimey, not one to trade my Leica in for then?

But seriously this ain’t gonna be for you if you like premium gear. But there may be enough for you lomo kids and lo-fi fans.

Given it’s looks I understand why you came to that conclusion. But no this is a simple 35mm camera that weirdly looks like an early digital like one of those Kodak’s geared for kids.

All plastic affair with a 2 tone satin silver design. It’s a bit creaky but not awful.

This is lo-fi stuff alright. You have a fixed focus lens with a non adjustable aperture.

But this has a zoom lens.

I use the word zoom in small caps for a reason. With just over a x1.50 zoom the 32-56mm doesn’t exactly scream much difference. No spec exists so I’m guessing a shutter around 1/100. I suspect there is a fixed aperture circle which will vary about a half stop depending on the zoom. I’m guessing it sits somewhere around f/8 to f/10 mid-zoom. The film plane is curved

The manually triggered flash is powered by a single AA.

Halina Silhouette ?
Blimey you must be a regular. On paper that fixed focus zoom camera should be better with motorised zoom, motordrive, DX coding and just maybe some exposure control. But nope, it’s one of the worst cameras I have ever used.

How does it Handle ?

Standard loading arrangement for this camera with a thumbwheel advance. the simple viewfinder actually zooms which was surprising. Flash is slow to charge up with a single 1.5V battery.

Tow rewind you need to flick the rewind switch on rear and use the standard rewind crank on base. the rewind crank is actually robust but not great to use as the point you grab is small and doesn’t rotate.

There is no frame counter. But the lens has zoom length markings on the barrel.

Mines had issues on the first roll. It didn’t seem to wind or cock correctly. I’ll put that down to lack of use as the next rolls worked fine. However I suspect reliability is not a strong point here.

So show us Your Results

This did better than I actually though it would. But bear in mind that level was absolute cr&p. Still this isn’t awful.

Its images are little soft and soften towards the edge. It’s sharpest between 3-10m. It’s about the same though as many a fixed focal length plastic camera.

It has barrel radial distortions on both focal lengths and some fringing is evident. There is some loose material in my shutter giving a fabric fringe on some shots. The lens vignettes a bit when shot on wide.

It flares awfully in bright light

So may be give it a swerve ?

Look this is what it is. It actually is better than I thought it would be and provides image quality in the ball park of the current crop of reloadables and simple plastic cameras. And if plastic cameras are your thang this is worth a sniff

It’s pretty unique as a zoom plastic camera. And it is the best fixed focus zoom I’ve ever used but given the only other I’ve tried is the Halina Silhouette that’s not hard. Mind you you do look like you’ve a fisher-price digital

I’d always mention a VUWS or a clone out of the blocks. One of the smallest 35mm cameras ever made with a surprisingly good vey wide angled plastic lens. If a more retro style but better lo-fi optics is required the Hanimex 35 SE/Halina Flash 350 is very worthy and has a coated glass triplet lens that still adds a distinctiveness. Equally the earlier Halina 1000/Ansco 35 offers a plastic lo-fi experience with a plastic lens that is quirky and wrapped up in a retro plastic body. If you want new one of the cameras typified by the Dubblefilm Show may be worth a look.