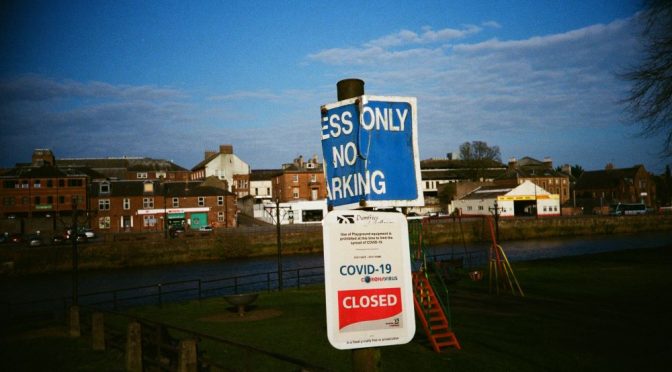 As i sit typing this just out of full isolation a few days before Hogmanay, it’s easy to reflect on what a crap year this has been. But for analogue photography the game has carried on and quite well in some areas.

So while I ring the family to leave another mince pie outside my door, Lets have a look at some of the highs and the lows of 2020.

Okay lets be clear this my award for the most launched new product of the year (Sorry COVID-19 no dice here). Oddly there’s been a run of contenders.

Instax remains one of the biggest success stories and there was a lot to feel excited about this year for fans on instant photography with both the unveiling of the lomoGraflok and Hasselback Portrait backs for Large & medium format shooters. These wont arrive ’til 2021. We had the Launch of the Nons SL42, the worlds first integrated instax SLR and the year ends with news that Mint are launching the InstantKon SF70 a instax square rangefinder. Fujifilm gave us two new Instax cameras although these can be seen as revisions as we’ll discuss later

For the last few years, we’ve had a trend for reloadable disposable cameras like the Lomography Simple Use. However these are a pain in butt to load and not surprisingly there has been a move to more easily loaded cheap cameras. Technically the Kodak M35 started this last year but Dubblefilm gave us the Show in the middle of 2020, and it’s been followed by planned launches likes Ilford, Agfaphoto and Manual as well as several not known brand names. They all seem to be the same camera.

In late 2020 we had a flurry of film containers with Kodak Branding and more recently ÚKUA innovative Kickstarter. But even these were to late unseat our winner.

In March Matt Bechberger brought his Reveni Labs meter to kickstarter. Funder with 18 hours, the Reveni kickstarted (groan) a rush for accessory meter. I’ve tested the Reveni, V-201X and the pre production Hedeco Lime One. But there are growing number like the Keks EM-1, L-101 and the ZB M08. All these have their strengths and weaknesses.

But really it’s Matt who deserves this award by triggering this flood. His Reveni Labs is the one I still tend to use on field tests due to it’s size.

This is purely a site based award. I’ve used a range cameras this year but what stood out ?

There were lots of notable camera. The Nikon Pronea S was much better than it sounded pretty much out featuring equivalent Nikon budget SLR of the era with support for things like AF-S. Shame it is a dead format and a pointless buy in 2020 with lenses you’ll struggle to use elsewhere. The Nons ML42 (bad name and flaws aside) was a fun first production instax SLR. The Lomography Lomolitos was a great surprise a forgotten camera that was the first reloaded disposable over a decade ago and arguably the best in class bar flash.

Runner ups were some odd choices however. The camera that put the biggest grin on my face was the Tamashi FMD QP8000. It might be rubbish, noisy and likely to break any moment but it truly had me grinning. The Canon EOS 1000 was a pleasant surprise and in someway demonstrated Nikon’s slip of supremacy in the 1990’s SLR wars.

And the Winner is ……. Ricoh Singlex

This was my first review published in 2020 but I’m still stunned by this camera. The Singlex has a fascinating history, with the result of the weirdest 3 in a bed romp by Japanese camera manufacturers in History. In short Nikon was rolling high with their Nikon F but had no consumer body. So they turned to Mamiya to make them a F mount compatible basic camera. That camera was Nikkorex F. But weirdly Nikon let Mamiya sell the design on. And that’s where the Singlex comes in. It is basically the Nikkorex bar 2 feature. They use different but compatible clip on lightmeters (Nikon -Selenium and Ricoh -CdS).

The other difference is the mount. It is technically a Ricoh Singlex mount and the lens created for this camera without modification can only be easily used on this camera. But that mount is a Nikon F mount with slightly wider gaps between the bayonet flanges. So this camera will fit almost any F mount lens and will be practical with any F mount lens lens with an aperture ring bar the usual exceptions like the invasive fisheyes.

And it’s a good example of a late 60’s SLR and is the first camera to use a Copal Square shutter. It just works and is fun and the lens work with some of my adaptors so they can enjoy a life beyond the body.

While there has been some good cameras, there has been some dross. Controversially I’d pick out the EOS 1000 sibling, the EOS EF-M. Essentially this takes a perfectly good auto SLR and ruins it by making it manual. So you get crapper features in terms of metering, flash and awful ergonomic when using EF lenses for manual focus screen. It can use other lenses stopped down but I found it pretty choosy about what adapters it would work with. And really what’s the point. You can use a AF EOS model for the odd occasion you might want to either use EF lenses or other manual glass – and if you want to shoot manual lenses more often get a manual body or invest in those Nikon or Pentax AF cameras which offer legacy support and a rangefinder helper for focusing like the F90x or the MZ-5 to name just 2.

In fairness with some cursing and frustration you could take an okay image.

Couldn’t quite say the same with wonderfully stylish (if you’re a bit Jingoistic or a tourist) SnapJack. It is the Hotblack Desiato of cheap cameras – looks great takes worse images than a disposable. Similar Pentacon’s Praktica Elite was never going to match the likes of the mju or better AF compacts which it aped but it was pretty poor & not in a good way. But there was one camera far worse.

Okay I apologise this is digital, but this was truly foul. Worse still it is still being flogged to the unsuspecting for sometime eyewatering prices. Looking like dSLR or bridge (and even marked as such) with a reasonable 16MP HD capable sensor and big X16 zoom lens. It is in fact a complete scam with a sub 1.3MP (likely interpolated sensor) stuck behind a a fixed focal length and fixed focus lens with a massive false lens barrel.

Now whilst 1970’s film Scameras of the Color Optical lens type do have some appeal today with the lo-fi crowd. The same cannot be said about this pile of S*it . So imagine your worse frozen zoom screen this year. Compared to images take on this turd of a scamera that would look positively like it was shot under studio lighting by David Bailey. Found on Wish, Amazon, Ebay and other online sales sites you’ll find it seductively priced at the budget end, offering more non existent features than it has to trap the unwary.

Best New Camera of the Year

There have been a number of new analogue cameras this year. This has been welcome but in fairness few have broken the mould. So Fujifilm gave use the Instax Mini 11 (an updated Mini 9) and the SQ1 (a dumbed down SQ6). Dubblefilm Show is worthy a mention with it’s neat styling but it follows on from last years Kodak M35. Both Ilford , Agfaphoto and others as mentioned are launching clones of this model (cheaper than the dubblefilm and really the designer see-through neon pouch isn’t worth the difference).

One does a bit more though. Right at the end of the year Mint launched a Kickstarter for the InstantKon SF70 rangefinder. This uses Instax Square film compared to their earlier InstantKon RF70 (instax wide). It would likely have been the winner but it isn’t in production yet.

Likewise the mouthful that is the Lomography HydroChrome Sutton’s Panoramic Belair Camera isn’t quite out there yet. It takes the Sutton Liquid lens concept from DIY Fla- packed cardboard Lomomod1and crafts it onto a more rigid body geared for panoramas images. Also given a name designed to nark reviewers I suspect (why not Lomomod Pano ?)

But these are evolution. We did get 2 radically new cameras but which are flawed in equal measures

And the Winners Are….

You knew I’d put the Nons SL42 in here somewhere. The company deserve Kudos for delivering the first interchangeable lens SLR in over a decade. It shoots instax mini and by merit of a passive EF mount can use tons of lenses. It has a innovative leaf shutter system and is not overpriced costing roughly half the cost of InstantKon RF70 with a lens included. But it has an atrocious viewing screen and there are gremlins which stop it dominating. The name isn’t great either…

And weirdly it finds itself sharing it’s prize with mediocrity that is the New Yashica MF-2 Super. For years folks have asked for something more than a new plastic basic 35mm camera and the New Yashica actually delivered a camera a class or two above that with the MF-2. It’s close copy of the original MF-2 but to be frank that was pretty mediocre in it’s day and intended for developing markets. But it is different to what we’ve seen for sometime, works as you’d expect and is out there.

I’m just not sure we were ready for it.

Not all new products get to launch on time or at all. Hasselback Portrait is already running late but the company does have a history of delivering and to be fair it is a crazy year. Ferrania re moving off this list by biting the bullet and switching backer fees to to store credits which I think is the right decision and at least they’ve produced film.

But the production of the Reflex SLR looks no closer despite the attempts of it’s team to be upbeat.

Communication isn’t something that Robert Hamm has done to his backers for the NuBox1 Box camera in over 18 months now, which is petty bad. I doubt me and the other backers will ever see a camera or our money again.

Perhaps the immediate biggest story was Nikon’s sad decision to stop the F6. Arguably the most advanced 35mm camera ever made outlived all the other Japanese SLR and leaves Leica alone in that high end bracket. But as I discuss things are not quite as bleak as they might seem.

Of course the shadow of Coronavirus stood large over us. For many of us that has been a frustration and a hinderance but for others it has been a matter of a battle of life and death. It’s impacted us all whether directly or indirectly but with vaccinations being rolled out there is a glimmer that 2021 will be better at somepoint.