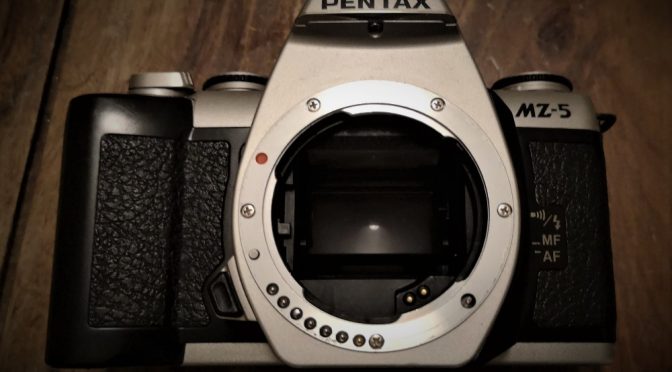 One of my targets in my Poundland Challenge of getting cameras for a quid or less was to get a SLR body. I knew this was still likely and I’d come close with a Mamiya camera with a non interchangeable lens (some sneaked in at last minute with a £1.20 bid. I’d also passed on a Nikon F55 (already own) and a Praktica BM series body that went for 99p. Still I was bit surprised when the MZ-5 (ZX-5 in US), a 1996 Pentax prosumer AF SLR arrived for just 99p.

The reason was probably the untested sold as parts or spares status. Unlike 2015 Nikon F55 which arrived in quite good condition, this clearly had a much harder life. It also had not been stored well given the ominous corrosion on the metal body screws & strap lugs. The Data back battery was still in and starting to leak and more worrying there was a film loaded. There was also no body cap.

Luckily the camera was still working underneath and has cleaned up reasonably well although the silver plastic top housing really shows the wear. there one fault which is not uncommon and not a deal breaker which I’ll discuss later

There’s another reason why it was so cheap.

By 1996 Pentax were on a bit of a back foot in the SLR market. They’d been one of the dominate players for decades (it’s notably that the usual camera that photography students are advised to get is the Pentax K1000 not one of their rivals), But despite giving us the world’s first Autofocus SLR in 1977 with ME-F they lost their way. Despite having some innovative cameras and slid out of the top teir dominated by Minolta , Canon & Nikon. However they remained a force to be reckoned with.

The MZ series which launched with the MZ-5 and MZ-10 was an attempt to revive their fortunes in the SLR market. The double figure cameras like the MZ-10 were targeted at the entry level market. They were aiming at folks who wanted to step up from a P&S but didn’t want a too complicated camera. So they resemble most other SLR of the age reliant on LCD control via thumbwheel and push buttons.

The MZ-5 was after bigger fish. It aimed for more experienced amateurs/prosumers particularly those who’d grown up using Pentax MF cameras. The striking thing with these cameras is the top plate. No thumbwheel selected LCD here, You get a top plate more resembling a 1970’s camera with a shutter speed on one side of the viewfinder and a EV compensation dial on the other.

This was pretty unusual to see by the mid 90’s. The professional level Nikon F4 was the only other AF SLR offering this in 1996 that I know of. And that was replaced by the F5 by the end of the year. This makes the MZ-5 the last AF launched with this more MF style top plate

Reasonable spec for a mid 90’s AF SLR (to be honest it rivals my 2002 F55 and the lens support is better). More details can be found on Mike Butkus’s page with manuals for both the ZX-5 and ZX-5n.

For me the biggest missing feature is lack of DoF preview. If that bothers you the revised MX-5n (ZX-5n) adds that and some other features like bracketing

Mines came with the data back. Weirdly there not a lot of love towards this in older reviews. Odd as if it bothers you you can leave turned off (or take out the CR2025 battery). This (2019) is the last year you can really use it however unless you find one working in 2094 as the date stamp year only goes up to ’19. The back is removable and is swap-able with other MZ series cameras.

Pentax is legendary for it’s K-mount compatibility and this body supports almost all the film camera lenses ever made with a few exceptions. As it is KAF2 it will support ultrasonic lenses with motors on body too. It also supports some digital K mount ones although you’ll need to consult a good compatibility guide.

It can also accept M42 screw lens via adaptor. For manual focus there is focus assist for all K mount lenses as long as the widest aperture of the lens is f/5.6 or wider. Program and shutter priority (weirdly indicated by Tv) are only available if a K mount lens has the A revision (automatic mode) or newer. Otherwise you’re stuck shooting in manual or aperture priority (Av) modes.

Also Worth noting that to use the the 6 segment matrix metering you need to use a KA or autofocus lens with older lenses you’re limited to centre weight and spot.

A word of warning re the Ricoh pin. This dates back to manual focus cameras days. When Pentax developed the KA revision on their lenses in the 1980’s, Ricoh weirdly developed their own system using a single pin (the KA system added 6 contact points on the lens). Several other makes also made this and you’ll get examples where both systems can be found on third party lenses like this example

In manual focus days there were no issues. However for AF pentax bodies there’s an issue. That Ricoh pin lines up perfectly with the AF motor point and will lock into it making the lens suck on the body. So check any non Pentax K mount lens that has a A or P mode.

Mosphoto have a fantastic compatibility chart for K mount cameras.

This looks more like a 90’s manual focus than AF SLR. The body is made out of a lot of plastic in that late 90’s top part silver lower part black style. The plastic hasn’t worn well on the silver end. It’s light at 380gms but at least has a proper metal mount plate

It’s quite a pleasing camera to look at bar the silver/black thing, The handgrip is quite small which might frustrate some. However it can still be held one handed.

On the top plate you’ve a Shutter speed dial and a EV comp dial. the latter doubles as a manual ISO setting dial allowing you to override the auto DX coding. there’s also a ring that moves between the 3 metering modes.

Around the shutter button there’s a switch to go from Lock, single shot, continuous and timer. There’s no cable point on the shutter but you can still buy the proprietary Cable switch F on amazon or eBay. Below its insertion point on lens mount you have a button for flash mode & switch for MF/AF.

Unlike most rivals and later SLRs, the mode is set by your choices on the shutter dial and (if applicable) the lens. With KA lens or later AF lenses that have a A (auto) setting if you set this and the shutter dial to A you are in program mode. Set the shutter speed and your into shutter priority if the lens remains at A and so on.

For manual focus lenses you’ll need to set the switch on the barrel to MF.

I unfortunately don’t own any AF Pentax lenses. I had a choice between a SMC Pentax KA zoom and a Ricoh Rikenon 50mm 1:2 which lacked the A feature. Of course having not read the manual I plumped for the prime. This mean I lost out on the opportunity to shoot in program or SP (neither a huge loss as I’m happier using AP anyway). More importantly I didn’t realise no matrix metering but Que sera, sera. I can live with centre weight

Loading is easy enough and I got 37 frames off a 36 roll (none of Nikon’s later reverse loading which always seems to loose a frame.

The viewfinder is quite dark with LCD info to the side. In bright light this can be tricky to read. Shutter speed is displayed and if your using a KA or AF lens you also see your aperture – so I didn’t !. EV compensation shows up thankfully and there a flash warning light.

In manual expsoure mode a LCD bar appears showing you how far of target you are.

The focus screen is geared for AF and isn’t the best for MF. But the focus assist is pretty good with a focus marker appearing in viewfinder and a audible beep when it thinks your on the money. This worked fine for the non Pentax lens i was testing and seemed on the money pretty much every shot bar where I had complex surfaces.

Likewise metering seemed on the ball although I need the shots back from the lab to confirm the shutter was opening correctly.

That shutter is relatively quiet. The winder has that typical motorised noise level

Like many an older boy, my MZ-5’s appendage no longer pops up and stands proud. This is common issue with the built in flash for these. The flash works but wont actually stay up meaning you’ll need a blob of blu-tack or something to wedge it up. With a GN of 11 it is weaker than some rivals (the older Nikon F-401 had a GN of 12). It will however do non program TTL flash setting with all lens including adaptored M42 ones.

The camera does support dedicated Flash units. Ricoh lists some more recent models that work with Pentax 35mm SLR but consult the manuals before buying. The manual listed above give some contemporary units. As with any AF generation SLR don’t be tempted to whack on an older non dedicated flash unit as you could fry the electrics.

Final Thoughts on the MZ-5

For 99p I’ve got a scruffy but reasonable Pentax body. Its a rare 90’s AF body offering controls more like a MF body. The fact that it will work and meter with older Pentax lenses (and M42 screw mount ones) is pretty good. But there are issue with the viewfinder and it is pretty platicky. The droopy flash doesn’t bode well for longevity. And given the data back only goes up to ’19. Pentax clearly didn’t see this camera to lasting decades.

It is however more practical than the P30 series with ISO control , SP and EV compensation . But they do feel a little more robust.

This however is a fantastic bargain for a few quid. Granted it’ll be less reliable & harder to get CLA’d than a K1000 but it offers a lot of features for just 99p.

If you do want to get go for the MZ-5n/ZX-5n for DoF viewer and try to buy with a lens. That will cost more but you’ll usually get the lens & body for often much less than buying the lens would cost.

Other Sources on The MZ-5