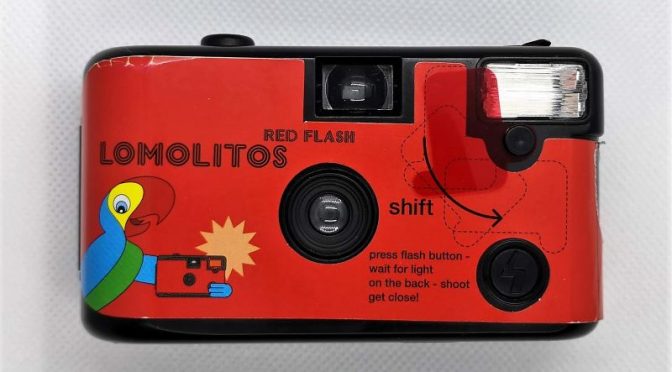 Lomography are probably the most prolific current analogue camera makers in the world. Many of their products have cult status. But a few cameras just haven’t cut the mustard and disappear. One of these is this little known number. But this shatters the whole notion that the Lomography Simple Use invented the re-loadable disposable class. And the Lomolitos might just be the better camera.

This really is a camera no one seems to have heard of.
The earliest reference to it is late 2005. It would appear to be out of production by 2009 according to the Lomolitos Flickr group..

I’d only come across this by chance when I was researching the Simple use camera. Lomolitos still exist on both the BNIB and second hand market. I went new and my camera duly arrived from Italy.

As Lomography marketing blurb put it – “A REVOLUTION IN LOMOGRAPHY. The Lomolitos are single-use cameras – disposable in cost and simple construction, but absolutely priceless in sheer photo-impact. For the first time ever, a compact throwaway (or more accurately, “throw to the developer”) camera has been fitted with our color-gel flash apparatus”.

So principally marketed as a single use camera with a flash filter. But what made this different to the myriad of disposable cameras was you could easily reload. Excep weirdly Lomography didn’t market it that in the press releases …

Information on this is surprisingly limited.
The camera box and body stickers tell me info about the film and the optimal flash range (0.8-3m). But that’s it, bar the single AA battery for the flash. With the Camera you get a fold out poster. On one side has the parrot Logo and lots of shots of the young pretty things presumably on this camera. On the reverse is some “information”. That information is a smorgasbord of Lomography ideas, rules and suggestions.

I kinda wish that Lomography and Fight club shared the first rule. But nope we get the 10 golden rules of lomography laid thick again.

We know the camera came in 4 colours. This wasn’t just cosmetic, the colours related to the single gel filter you can slide over the flash. I plumped for red but a Blue, green and yellow version exist. If you like that sort of thing the newer simple use colour models come with a choice of gels. Oddly the B&W version has none.

Or you could just use any other camera with a flash and hold or stick a gel over the unit. I’m told the wrappers from quality street chocs are just the thing for this.

The Known, Knowns are that this is a plastic built 35mm camera with a fixed focus, simple lens. Film plane is curved as is common in the class to improve the focus of the cheap lens. There is no way of altering the shutter or aperture. There is a manually triggered flash powered by 1 AA. The camera will work without the battery (sans flash).

Anything else is conjecture. CNET indicate the shutter speed in 1/100 which is totally plausible. I cannot find an aperture or focal length but I’m guessing the lens is around 30mm. The aperture looks about 3mm wide so should be between f/8 & f/11. All of this would be around the class standard.

The AA battery is unusually inserted upright in the base. This is good as given the flash it’s easy to slide in and out.

The Lomolitos was preloaded with a 24 exposure unknown 200 ISO film. As with all cameras in the class the camera winds the film back into not out of a standard film cartridge.

So why load the Lomolitos with a 200 ISO Colour Negative ?
It doesn’t make sense. Almost all disposables and their re-loadable brethren use 400 ISO or faster film these days. This is due to the wide latitude and ability to shoot in less than ideal conditions. 200 ISO just doesn’t do the deal.

It is a cheap black plastic camera overlaid with one of 4 lurid stickers. it’s flimsy but okay built. To access the film compartment, there is a small clip. This is irritatingly buried under the main information in English on the flash side of the camera. This is flimsier than the proper latches you get on more recent rivals. But I manage to shoot 4 rolls without issues. Notable there is now worries sticking in a roll of 36exp

The inside is clean with no protruding electronics or fiddly bits. Worth noting if buying second hand you’ll need to turn the sprocket over the film frame. The winder won’t cock the shutter itself.

There is no tripod or cable points. Nor is there any MX switch.

Thee’s not a lot to say bar the dodgy flash discussed above. The viewfinder is okay for what it is and there is a film counter on the top plate. A single LED by viewfinder tells you when the flash is fully charged.

Reloading involves you hooking the film leader onto a small peg on the take up drum and then winding on. There is a small switch which activates on opening the rear which allows you to wind on in reverse. Once you’ve go the film started close the door and load by winding on the drum. Then you move the small switch to the right when you are ready to shoot

It’s by far the easiest to load camera of its type I’ve ever used. And there are no issues with 36 exposure films.

To turn on Flash, you hold a button on front. Irritatingly my one would continue to charge even after the shot. I think it was faulty but the blurb does seem to encourage you to use it with flash. The battery in my camera was totally dead which was odd even for something 10 years old.

Forget about the loaded film. The emulsion is going to be probably knackered. Mine came back looking like badly fogged B&W.

But load this with 400 ISO negative film and the game is afoot. This actually pretty brilliant for what it is.

I suffers from all the issues you’d see elsewhere in the class. Focus softens notably away from the centre. There is obvious radial distortion (Barrel) and long shots are that bit softer than near.

A close zoom of the confirms detail of long shots isn’t great but about average for the class.

But much less than other cameras. Frankly it isn’t as good as the Harman Re-loadable. Bu itt is better than others in the class including the Simple use. And the Harman is a total pig to use.

It loves 400 ISO B&W films. this is probably due to the fringing you get with colour from chromatic aberrations

The ‘bay has a few but they’re not cheap. The cost of the camera sounds okay between £10-16 GBP before postage. But most are via international sellers. So postage often runs to as much as the camera, making this more expensive than the current Lomography offering . You also need to factor in potential crap and short roll of preloaded film when comparing prices.

I’m very much of the view that there is no such thing as a perfect reloadable class camera. They all have strengths and weaknesses but this is probably the best I’ve used bar one thing.

It is certainly the easiest to load. Ironic as all the cameras that have followed are much harder to load. Optical this is a good camera sitting just behind the Harman (arguable the worst to use). It is better than many a cheap plastic normal camera. Although I’d still argue that unless you really need the re-loadable like this that class offers better cameras for less.

On the niggle front the elephant in the room with my copy is the flash which once activated keeps on. It may be just mines but it is annoying. However as you can pop out the battery quite easily not as big an issue. I also suspect the catch on the side isn’t going to last.

That said this is on balance the best re-loadable disposable out there (if not needing the flash). It begs the question why did lomography issue it with the wrong film speed ? This is one of the reason I suspect it died. Secondly marketed in the already saturated disposable market. It was never going to last especially given Lomography’s failure to capitalise on the re-loadable nature,.

I’d still look at cheap plastic cameras over this but if you must have a re-loadable here you go. Otherwise have a look at the Goko UF or the Hanimex 35 es. Also keep in mind the technically disposable but easily re-loadable Kodak FunSaver.

2 thoughts on “Raiders Of The Lost Lomos – The Lomolitos Review”