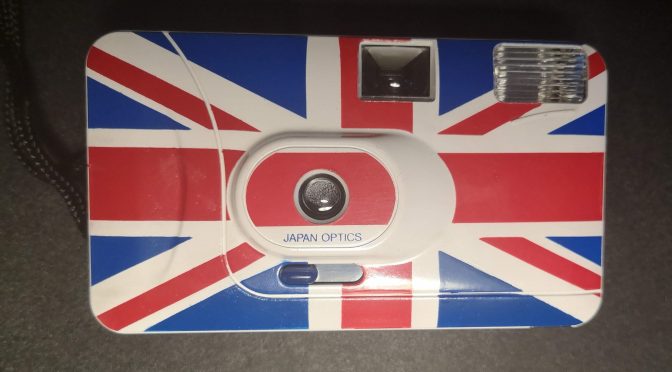 With the arrival of the Dubblefilm Show, it got me thinking. What is the cheapest 35mm film camera you can buy on eBay. So you know a few days later that arrived. Trouble is the SnapJack technically isn’t new. It is in fact a rebadged Concord 850 Slim Line. But what do you get for your Tenner ?

I’ve tread this ground before with the cheapest digitals on eBay and wish. These turned out to be the same scamera but in very different clothing. But this actually is what it says it is a proper 35mm camera and makes no inflated claims (kudos to you SnapJack)

Before you rush in and say but I saw this waterproof camera for less. I made a decision to go with the cheapest UK or EU sourced eBay camera I could get. Yes I could get something from China or Hong Kong for less. But the camera had to be sourced from more than one UK and appear new.

I got the latter wrong but it is available on a few camera sites like filmcamerastore.co.uk or Loaf Cameras. Loaf currently sell it for just a Fiver (postage takes that nearer the tenner mark). Mine came from eBay for around a tenner.

But this isn’t really new. Although the camera packaging suggests it’s sold by The Original Union Jack co™ . It turns out the camera is actually made by Concord Camera Corp and sold by it’s UK wing. The game is further given away as whilst no name appears on the English and European languages instructions. On the Japanese & Chinese ones it is the Concord model’s name

Concord is a name familiar with plastic camera aficionados. This US company sold a range of plastic camera sunder the various brands like Le Clic, Argus or Keystone. They also made camera for or licenced the name of bigger brands like Kodak and Polaroid. And in fact this is just a reskinned Concord 850 Slim Line.

Concord began life in 1982. Launched by the enigmatic Jack C. Benun the company aimed to produced cheap but reliable cameras mainly made in China. Aimed for the cheap end competing against the likes of Haking, Hanimex and later vivitar. It would have its ups and downs as this post reveals but by the turn of the century was a major player generating $173.2 million in revenues in 2000. But they have produced some collectable cameras like the Le Clic Le Mini.

Problem is Concord folded in 2009.

So our camera is at least 11 years old. This would make some sense as the rubber band around the instructions had dried out and turned into little worm like fragments. I think it is more likely late 90’s design. Later Concord cameras were even more compact and more typical like the Polaroid 170BV or the Barclaycard one I tried.

It is very similar to the Le Clic 170 except it has a flash. This time it came with a manual though. So we know it’s a fixed focus simple 34mm lens with a fixed f/8.5 aperture and a single 1/100 shutter. The manual gives a focal range of 4ft to infinity.

That’s pretty much the same as my guessed spec on the 170. Both this and the 170 have Japan Optics logo which is mean to give the unwary the illusion of quality.

The camera will work without batteries but you need 2AA to power the manually triggered flash. The flash has a range of up to 8ft with 100 ISO film. And the manually helpfully suggest if you’re mad enough to load this with 1600 ISO you can get a flash range of 25ft. For more realistic speeds add 4ft for each stop over 100 ISO)

As you’d expect the film plane is curved.

There is no tripod or cable points.

This is a plastic Lo-Fi camera. It’s a bit creak but I give Concord credit they did an okay job for what it is. The Concord version version came in either satin black or shiny silver. The SnapJack is a bit more colourful with it’s Union Jack print.

Let’s be straight this was geared at young tourists who’d forgotten a camera in London. It would also have sold well for folk wanting a near disposable to take to Glasto or other festivals. And heck if you’re lomographer sat in Brooklyn I get that British cool vibe might appeal.

Flags however are symbols. And this perhaps is viewed differently depending where you are in the world and what community you belong to. Can see it selling well at Ibrox but no so well at Parkhead.

The camera has a conventional easy load system making this a breeze to load. To advance there is the same strange sliding mechanism I found on the Le Clic 170. It is the same mechanism you find on most 110 camera.

The simple viewfinder has no frame markings. The Only other control is the flash which is a tad slow IMHO to charge. it has a small green ready LED by switch on rear.

The slider below the lens moves a cover in place and locks the shutter. This is nice to see in such a basic camera.

The camera has no rewind lock. So don’t fiddle too such with the rewind knob whilst shooting (I only clocked this later as I like to pre-tense my film with new cameras when winding one to check it’s loaded okay.

Viewfinder is basic but okay. It is central but has some vertical parallax issues on closer shots. The Flash takes a wee bit to charge.

There is no exposure control so that bit is down to you deciding what film to load for the weather. I’d recommend a 400 ISO negative film or 200 ISO on really good days because you’re relying on the latitude.

The simple lens has some pincushion distortion and is pretty soft. The best focus is centrally about 1.5-3. It’s okay to around 5m but then falls off rapidly which is nuts for a camera being aimed at tourists. It softens to the corners as well, but ironically remain sharper for close objects than the centre is for for distant. There is fringing evident mainly at the edges.

Long is just woeful. This is the usual Nith shot.

If you zoom in this just get worse.

Things came out quite vivid in both 200ISO Kodak Colourplus but also quite intense sky with the BW400CN C-41 B&W I used. This makes it of interest to the Lo-Fi crowd but there are belter choices.

The flash is basic but works. It causes an artificial vignette effect (the aperture does not change).

The State of the Union – Conclusions

The SnapJack kinda fails as a tourist camera as it can’t shoot long stuff to save a toffee. You’d have been better buying a series of Kodak funsavers. That fact illustrates this isn’t an alternative to a single use Camera. For optical quality. Most of the reloadable disposables I’ve tested over the last years and a half are better. With the Lomography Simple Use being the logical standout. In it’s class (I guess the near disposable) cameras old and new outshine it. Take a look at the likes of the Halina Vision XF, or the cult Halina Panorama (with or without flash) or the more recent Dubblefilm Show. And for the same cost as a SnapJack you can pick up the Iconic Konica Pop or the lethally sharp but rare Goko UF.

It’s sibling the Le Clic 170 was actually slightly better optically. But there is some charm in styling and the image quality and tone might well appear to some Hipsters whom dig the British thang. It’ll also sell well to Rangers fans ; -0