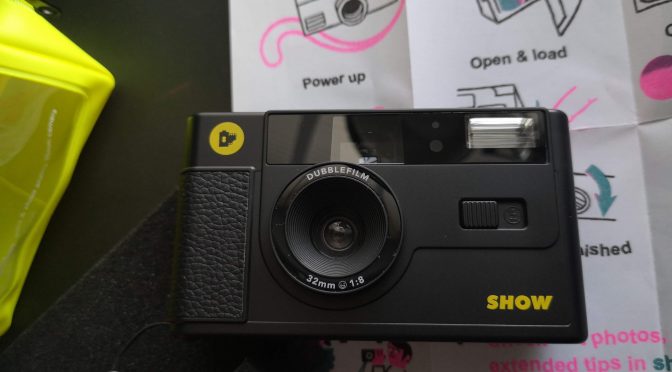 2020 has flung us some pretty nasty curveballs. But this is a somewhat more pleasant pitch at an unsuspecting world. I’ve already unboxed the Dubblefilm Show, the newest camera in town. But how good is it when the film’s been processed ?

In case you missed my Unboxing review – Dubblefilm whom are better known for their pre-tinted films surprised the photography world by launching their camera a couple of weeks ago.

This was great news in a otherwise crap year (my Money’s on Cthulhu and the Elder gods showing up in November BTW). But it is consistent with a trend for lo-fi cameras we’ve seen in recent years. We’ve had names big and small from JCH to the new Yashica to Harman (aka Ilford) all trying to get a piece of the market thet Lomography carved out with the Simple use camera back in 2017

But this is a small but significant step up

It isn’t a disposable nor a reloadable disposable

What is the Show ?

I’ve done a detailed spec overview of this camera in an unboxing post. In essence it is a simple plastic 35mm film camera with a fixed focus 32mm lens and a fixed 1/125 shutter speed. The aperture is usually fixed to f/11 but when you slide the manually operated flash on it shifts to f/8. That’s important to note as you can drop the AAA battery out of the bottom and exploit this to use as a 2 aperture camera without flash. The 2 sensor holes between the flash and the viewfinder serve no actual purpose.

The film plane is curved to improve sharpness given the simple lens. Dubblefilm recommend a 1m+ distance but I’d say don’t go as close as that.

The camera has an easy load system and no electroinics beyond the flash circuit. Available in black and pink…actually let’s just ignore the latter. The black version looks a bit like a Contax T2.

Goodness a new design then ?

Erm no.
As Phildjii commented on my original post this isn’t new. Actually ironically adverts have been appearing on my site for the Film camera Store in the UK selling a camera called the Vibe 501F. A quick glance around the spec and the internet reveals the 501F is indeed the same camera.

Ironically the Vibe is cheaper at the time of typing at Film Camera store but only because it is on sale. You can find elsewhere like eBay and you can save but just a few quid. But you don’t get the Jose Roda illustration which is cool, neon orange lanyard or the Plastic Hightide Japan designed case. The latter not so cool or practical IMHO but at least you get something for your extra pounds. The Vibe does come with 2 okay other colours – red and silver black combo as well as the Black and erm… that pink.

Dubblefilm are a brand and as such you’d expect a small premium over a generic version. You get stuff for your money as well but I do think the Vibe is slightly better packed environmentally with a cloth carry back and a cardboard box.

This is way easier than a reloadable disposable to use. There’s a standard easy load system. it is just point and shoot stuff with zilch electronics bar the manually turned on flash. As mentioned earlier you can drop out the battery and use the f/8 of the flash setting in lower light. With a fresh battery the flash charges quickly but is slightly weak.

Even with that you’ll need to judge your film before use. Negative 200 ISO film is the safe choices for most reasonable daylight conditions giving some room around the EV14 (100ISO) setting on the camera. i goofed with my first roll (some Kentmere Pan 400) as the cloudy sky opened into brilliant sunshine – that said it managed to cope with a couple of stops of over exposure

This is pretty much what you’d expect. You have a limited exposure range (EV14 @ 100ISO in normal use). So your exposure tolerability is largely dependent on film latitude (so not the first choice for slide then).

Images are very much in the disposable/reloadable disposable camp. Its centre is okay a bit soft but rapidly falls off to the edges. There’s notable pincushion distortion and fringing is evident. The latter is more obvious using colour film.

But centrally it can do things quite well. Better than the lomography Simple use or Kodak Disposable which says something but falls just behind the Harman Reloadable. It can put up a fight against budget Lo-Fi cameras like the Kodak KV250 from when film was king too.

Mind you it has some good moments with B&W film (but then everything looks better in B&W). That’s due to less noticeable chromatic aberrations and the softness suiting the medium.

Focus is sharpest between 3-5m. That’s no accident. The hypothetical hyperfocal point for a 32mm lens at f/11 is 3.05m giving an acceptable depth of Field (DoF) 1.5m to infinity. In truth it is soft at both those ends which I think is down to the plastic lens but between 2-30m it is alright. In the above shot when zoomed in you can easily read the Bar & Grill under heading but not the Sky sports sign beneath. That’s not bad for a cheap camera.

The Using in flash mode without battery trick works but you have smaller DoF. If the focal point is indeed around 3.05m when the aperture widens to f/8 you only get an acceptable focal range of 1.7 to 8.6m. Which is pretty much the case with things softening off even more beyond this.

The camera flares a bit. I’m undecided if nicely but it isn’t intrusive. Of the 140+ shots I took 3 or 4 had an odd leak like the one below. this wasn’t confined to flash shots and makes me think there is a reflective surface somewhere

Dubblefilm sell it on their site for 55 Euros plus postage and it is now available from other sites. The Generic Vibe version can be sourced cheaper. In term of current rivals it does cost more than the likes of the Lomography simple use which you can buy 3 of the B&W loaded simple use cameras for a little less. But it isn’t as easy to live with and will not last as long.

There are no big name cameras being made like it. The new Yashica MF- Super whilst mediocre in its class is a step up more with a better glass lens and more electrics It retails at HK799 (about 80 quid). lomography’s La sardina is arguably the closest but will cost you more but without flash.

Back in the day there were legions of cheap near disposable cameras made. I’ve reviewed a fair few but the Halina Vison XF stands out as very similar in design but not looks. The Olympus Trip 505 is a step up but has similar lo-fi appeal image-wise with a MD.

As a budget lo-fi camera this is not bad. It is also way more convenient in reloading than a disposable or reloadable disposable. This is fine for what it is. It is not going to be the saviour of film photography, despite the buzz it has gathered

It is another marker that film is far from dead. And that’s good. Nudges like this might make some of the big makes consider trying a film camera.

Of course you could just buy a vintage plastic P&S

Kosmo Foto have just published a good review of this camera. FSC’s Katie Mollon bet all of us bloggers to publish a review as she’d snagged a pre-release trial.

5 thoughts on “The Show Must Go On ? – The Verdict On The Dubblefilm Show”