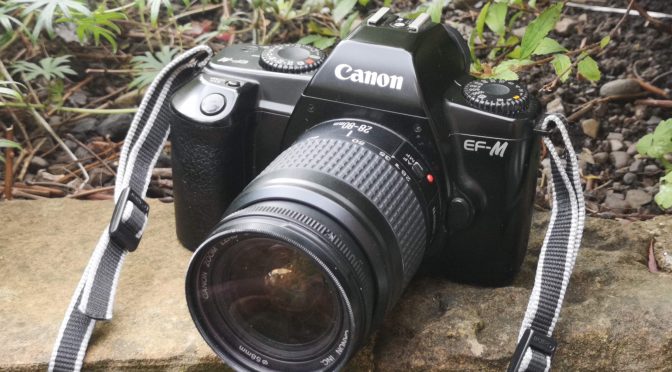 Canon’s switch to the EF mount had let them neatly leapfrog their rivals like Nikon at the end of the 80’s. And during the 1990’s they would produce cameras that cornered both the high and lower end of the markets. The EF-M is not one of those. This probably is one of the most pointless SLR ever produced.

UPDATE 15/09/20 – I re tested this with a second adaptor ring and the camera does work. Updated comments are in bold.

Just to be clear this isn’t a review of one of Canon’s M series CSC bodies that use EF-M mount lenses. This is a film camera and I suspect the reason its name was reused was because nobody wanted to remember it.

A Bit of Background

it’s not that this camera doesn’t come from pedigree (but budget stock). It is base on the EOS 1000 a camera that shook up the budget end of the market.

Nor does it not have some logic. Many folk were left a bit gutted when Canon ditched the FD mount and bemoaned the lack of manual focus body. So Canon came up with the EF-M.

There were some rivals. Nikon continued selling the excellent classic FM2. They also launch the F-601m which like the EF-M was based on a AF body. I used to think it was pretty pointless as you got better options using a AF lens than a MF one.

Then I met the EF-M

Launched in 1991, the EF-M was notably not sold in the Japanese market. It’s core is based on the EOS 1000 (aka Rebel) a camera that burst into the general consumer end of the market.

So you get similar specs. It has an electronically controlled vertical plane shutter which is capable of speeds between 1/1000 and 2 seconds, plus bulb. Metering is TTL and you get a 3 zone evaluative matrix metering in program mode. Other modes offer centre weighted metering and there is the optional spot metering

The body is plastic and looks still current. You could pull this out and folk would assume you had a dSLR. The only difference is the top plate. Likewise it’s the same viewfinder arrangement as the 1000 bar the focus screen. You have a penta-mirror set up with a classic matt focus screen. That comes with a split prism focus aid surrounded by a focusing microprism collar. there is also a ring marking the area of the partial (i.e spot) metering. Underneath LCD display of shutter,aperture and EV compensation. It also warns if battery dying, shows spot metering, and with decicated flash readiness. In ISO mode it shows the speed.

All this is needed as there is no LCD panel on the body. There is no diopter correction although corrective accessory viewfinder lenses were available.

As EF lenses lack an aperture dial tou get 2 command dials. 1 allows you to set the shutter speed and the other allows you set the aperture in half stops from f/1.0 to f/32. That dial also allows you to adjust ISO and locks the camera. The dial set up gives you a PSAM options. Leave both dials in A (auto) you get program mode.

There is no built in flash. There is a hotshoe which supports using a general non dedicated flash by setting the shutter to flash. It syncs here at 1/90. The camera does use a dedicated speedlite M200 – but no other units (I suspect that M200 is only compatible with this camera).

There is an EV compensation mode, electronic timer and tripod mount. Power is via a 2CR5. There is no cable point and no remote is mentioned in the manual as an accessory.

So bit basic but whats the issue.

surely with a camera like this I’ll be able to mount my vintage FD glass via an adaptor. Well yes… but you can’t use it.

The camera has a standard EF mount which is what you’d expect. Now Canon EF lenses are all auto focus. As such they aren’t geared to MF. Most lenses have a AF/MF switch but it realy is there for folks to tweak. There is no focus scale and the grip is small for doing MF. A small number have no switch and can’t be used with the EF-M. Canon sold an accessory ring to make using EF lenses manually easier but this doesn’t seem to have been included as standard.

Of course this won’t work with EF-S lenses.

But Alan I hear you say, surely with a camera like this I’ll be able to mount my vintage FD glass via an adaptor.

Well yes… but you really need a good adaptor.

When I orginally wrote this piece, I used 2 generic mount adaptors a M42 to EF and a Nikon AI F to EF. Both these worked fine with newer cameras including my EOS 300D and EOS IX 7.

Now neither of these worked on either my EF-M nor a EOS 1000F. The Nikon adaptor to be frank was pretty cheap and poorly finished. So the fact it didn’t work was no suprise. But that M42 adaptor was actually well finished. Both mounted on the cameras and seemd to work but hit shutter button and the mirror locked with an error beep or message (flashing low battery on 1000F).

But wait a second..

Following this review’s publication I got some feedback about others having no problem using an adaptor. In the spirit of fairness I shelled out for a more pricey branded K&F Concept M42 to EF adaptor. I’ve discussed this more here. But essentially although heavier, different colour and with a nicer finish it looked identical to the generic adaptor.

It worked and yes I must apologise for saying you couldn’t use adaptors. But whatever difference there was is tiny. To be honest, the two M42 adaptors had negligible difference. I cannot say for certaint that even another K&F would work for sure.

And that’s the issue. You’ll need to trust luck

Nikon had launched their own modern equivalent AF style manual focus camera the F-601. around this time. It is half botched as you can’t use all the features with manual focus lenses. But at least you can use them with no fuss.

Also worth noting I found the camera couldn’t work with a 3rd prty lens. The problem was with a Yongnuo 50mm F1.8 EF mount lens. Oddly that worked fine on my EOS 1000 F and my EOS 300D. I’d blame the lens more as it wouldn’t work the IX 7 either and 3rd party issues are well known with Canon cameras,

It doesn’t get much better. But let me start with the positives.

The viewfinder is bright and the focus screen is good. you get what you need in terms of the LCD displayed within it. Noise wise it is about average for the motordrive and shutter. That said it’s not quiet (the 1000 would be replaced by the 1000 N which improved here). Loading is pretty straightforward with camera auto setting DX. The camera winds film out and then gradually rewinds into the canister so if you open the back you’ll only lose a taken shot or 2.

But controlling this thing is an ergonomic nightmare.

The dials do not overhang either front or back and are quiet small making it difficult to use. It probaly is easiest to shoot either program or shutter priority with this camera. Although the focus screen is good the EF lenses don’t lens themselves to work manually.

The 3 zone metering system seems to give preference to the sky in bright light. Nikon clearly still had the edge in the early 90’s

I’ve said before optical performance depends on the lens & the shooter but I will follow up with some shots taken on this in due course. My gut feeling is this will do worse than say shooting with a EOS 1000 with lens set to manual as its too fiddly to get settings and my peepers are not as sprightly as they were.

Why was this ever made. Perhaps some Canon Exec fed up with letters from folk moaning about lack of manual focus bodies turned to his design team. “Give them a manual focus version but make it so bad they’ll never bother us asking again.”

From an updated perspective yes you may be able to use adaptor. But in comparison to later models that is bloody temperamental . It still doesn’t deal with the crap ergonomics….

But in fact if you want to shoot with manual lenses go out and buy a AF EOS model that can use adaptors like the EOS 500n as this post shows. Granted you’ll not have the best screen for focusing and no focus confirmation (unless you have a chipped adaptor that works for your model). But it will be a more enjoyable experience.

Sources and other Info

Mike Butkus’s site has the manual. Camera-wiki and Canon’s Own Camera museum provide a lot of additional info. There’s little else out there that isn’t linked to camera-wiki.