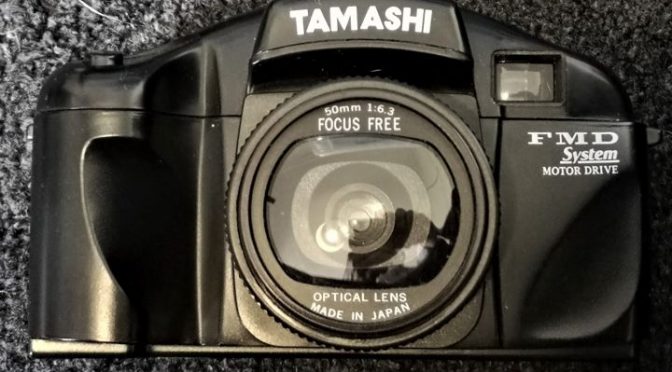 Tamawhati ? Possibly the weirdest named camera I own is yet another Optical lens camera. But there is something beguiling about the Tamashi from a Lo-fi perspective.

If you want a review of a high end camera look away (I’d recommend a dalliance with the Chinon 35EE for bargain but sharp compact rangefinder). But if the words Lomography or Lo-fi mean dirty fun to you then read on.

This is one of the Legion of so called Optical Lens cameras that turned up in the 80’s and 90’s some as promo items but others as scameras, They’ve a bit of cult following today although many folk really turn their noses up at them. They are essentially what the Diana was for the 1960’s.

The history of these cameras can be traced to 1981 when the New Taiwan Photographic Corp. was founded. This company produced a bewildering array of so called Optical Lens Cameras. Collectiblend perhaps has the best list. However it is widely felt to be incomplete. Our focus brand name Tamashi does not feature (near identical models do). Also some believe other manufactures also made these cameras.

Like earlier Diana cameras and its clones, these optical lens cameras were lo-fi models often used as promotional items. The most famous being the Time Magazine cameras which were given to new subscribers of said Magazine. I’ve previously reviewed the UK equivalent the Barclaycard Visa Camera as well as the Roniflex X3000 but there are legions of other ones. Others would be cheap prizes at fairs or sold cheaply

However some were more nepharious. There are a range of scamera sound a-likes designed to snag the unwary. The most famous is the Olympia camera series but you also go Mintax, Nippon, Nikkai, Canon (yes really they got away with that) and my favourite Yoshita. And there are loads more. these would be sold with cheap accessories like a press style flash and tripod for grossly inflated sums.

All Optical Lens cameras are styled to resemble SLR or (rarely) rangefinder cameras of the day. They all feature a 50mm fixed focus simple lens usually made out of plastic. The lens will often say Optical lens often prefixed by color. Some like the QP8000 will also say “made in Japan”. The camera isn’t but it is possible the lens component come from Japan. these were built in Taiwan or Mainland China.

All the camera have 4 (or occasionally 3) aperture settings which are set manually with the usually smallest aperture being f/6.3 or around. The others are usually f/8, 11 & 16. Shutter speed is fixed somewhere around 1/100 – it’s likely there was quite a degree of variability as the Yoshita manual states its single shutter speed to be 1/80-1/125.

Earlier cameras like the classic Time Magazine cameras had a simple thumb wheel advance but some later models like this Tamashi have a rudimentary motor drive. These cameras can be labelled FMD (Full Motor Drive). Here it is powered by 2xAA batteries.

Most have a simple viewfinder but some of the sound-a-likes had a top down brilliant viewfinder.

Almost all have scrap slag metal in their bases to give an illusion of quality by increasing heft.. The Tamashi feels no different.

As well as out QP8000, there are several other models bearing the Tamashi name and all with the FMD moniker. I suspect the QP8000 to be the last model as it has the appearance of a curvey mid 90’s AF SLR. Other models look more like a F-501.

As all the models are FMD series and searching can get confusing as folk often list as just Tamashi FMD Other models have older styling but seem similarly spec’d. These include the MX7500, S-1000F, S-2000F. They often were boxed with a flash unit and sometimes other accessories.

This is a later optical lens camera so styled like curvey 90’s AF. There’s a lot of plastic here but the slag metal makes it feel heavy. Actually vintage SLR heavy with a weight of 570 g without batteries or film. The camera uses 2xAA batteries which are inserted in the base.

The outer most ring on the lens moves allowing you to move between the 4 aperture (f/6.3-16) setting with are shown along with weather icons. The aperture is controlled by moving 2 V shaped blades apart and you can set the camera between the notched stop settings. The other rings have small amount of give but are faux. a window which is like the distance gauge you get on some AF lens shows the aperture setting.

Of course the lens is a fixed focus simple number. I suspect the inner 1-2 elements of the lens does most of the work. the outer is just for protection IMHO.

Beyond that you have no control no any feedback. There is no metering or lowlight warning system. All you do is press the shutter and shot is taken. Worth noting the rather loud motor drive doesn’t kick inuntil you let go of the shutter button. This is handy if you’re street shooting although the shutter makes a notable ping noise.

On top you have a small window that lets you know if the flim is winding okay to the left of the faux pentaprism hump. That faux hump has a sandard hotshose slot. A film counter is to the right and over the handgrip end is rewind switch with the shutter button in front. That rewind switch needs to be manually triggered at end of roll and will keep rewinding as long as you hold it in rewind position. The frame counter does move down but it can be fiddly to judge when to stop if you want a leader left.

The camera has impressive door latch but it’s all plastic. It has what appears to be the same easy loading system you get in most 90’s compacts. Just mout the film and pull the the leader over to the far siade of the take up drum. But on closing the rear it doesn’t auto load – you must take a shot and wind on and repeat.

As per class the film plane is curved.

The viewfinder is big but basic and off centre. If your left eye is dominant then this isn’t the camera for you. In the viewfinde, there are no frameline or other info seen in or around it.

It is slightly off balance holding it one handed thanks to all the metal weights.

That said I couldn’t help smiling using it. It was basic and rubbish but easy to use. It looks at a distance like a bridge or dSLR so you didn’t stand out. And in our time of 2m social distancing folk don’t get close enough to start thinking “WTF is a Tamashi ?”

We’ll start with the bad news. There’s notable pincushion distortion and vignetting with this camera. It softens badly towards the corners. It isn’t great on the longshots either especially when shooting wide but that does improve with narrower apertures. There’s a lot of fringing too.

The viewfinder position means most of your shots are off centre.

There is loss of detail on long shots as this crop of the above image shows. But to be fair this is class average.

This is not for you if you want flawless images but for your inner lomographer there is stuff to be enjoyed here. Given the crapness of the lens it does better than you’d think centrally with near to medium objects. with 2-10m not bad for a plastic camera. It is soft but not exceptionally so. I think they set their focal point around 3-5 metres which means you don’t hit a theoretical hyperfocal distance until the aperture drops to f/11 or f/16. Certainly f/11 seems to be sweeter for focus than the wide 2 apertures.

The selected aperture setting match well with 100/200ISO film but with a bit of knowledge you can easily shoot faster film (P3200 was used in some of these shots).

hmm… My Tamashi seems okay but I know it probably won’t last. the plastic on these cameras gets brittle especially on the film rewind spigot. i’ve had to bin a fair few manual advance optical lens cameras where this snapped. My Barclaycard visa one only lives as I cannibalised a spigot that just fitted from another camera. I’ve had the same issue with a Matashi FMD. The motors are known to go and the blades of shutter or aperture can get corroded and jammed,.

I got mines with a Halina Paulette for just 99p (plus postage). You really shouldn’t pay more than a few quid for these and the other optical lens cameras.

Yes this optically the same as any other camera in the class. It’s quite noisey in use and weights over half a bloody kilo. But it was weirdly enjoyable camera to shoot with. It will be a perfectionists nightmare with the optics but for a lo-fi shooter this a wet dream of a camera

So buy a cheap one and have fun. It’s a crap camera but in a good way.

Alternatives to the Tamashi and other info

The closest camera to this experience optically is the Holga 135 BC which is also smaller, never tried to scam anyone and has more features. The Lomography Diana Mini equally delivers Lo-fi spills but is a frustrating as it is beguiling. I’d also consider the Halina 1000 and related models like the Ansco 35. They’re similar in spec but better built.

Mike Eckman tried the scamera Canon DL-9000 and hated it (I suspect insisting on using it with the flash didn’t help). Alfred Klomp does a review of another Scamera the  Nippon AR4392FH but finds it “likeable crap” (worth for the anecdote about how they were sold). Sylvain Halgand has numerous of these cameras on his site but importantly has the manual for some Yoshita autowind models