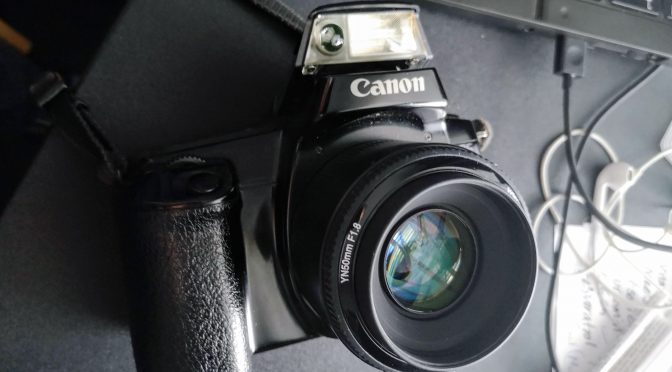 The Canon EOS 1000 (Rebel in US) and its flash sibling are not  the mightiest of the Canon EOS 35mm SLR line up. But they are important as the first EOS cameras to be more affordable. Somewhat overlooked they still offer huge bang for literally a few bucks 30 years later.

Launched in 1990 not only were they affordable but actually a budget EOS that consumers would want. Prior to that point the entry level models (750, 850 and 700) were fully automatic  cameras. These offered little user control over a 35mm compact Ironically the 1000 was notably cheaper than these at ¥47,000 yen for the 1000F QD ( about $446 USD at 1990 exchange rates).

The base model is the 1000 and the one with a built in flash is the 1000F. In the US these are known as the Rebel and Rebel S respectively. Data back versions were made designated with QD (e.g . EOS 1000 F QD). There was also a deluxe  model with switchable panoramic mask known as the 1000F QD-P but that was only sold in Japan.

The 2nd generation models have the N prefix so the revised flash model is the 1000FN (or Rebel II S). QD models are now sold under rebel branding (e.g Rebel II S QD). Confusingly in Japan the flash enabled data back version  (1000FN  QD or Rebel II S QD) is known as the 1000 S QD. There was a you’d expect a Japanese only pano version (1000S QD-P)

Canon rapidly grasped a new ergonomic design for their EOS range and the 1000 series benefit from it. At a glance it looks like any modern dSLR bar the colour review LCD on the back. It’s all well made plastic in the shell.

Features of the EOS 1000 Series

The core of the camera is a pentaprism SLR with an electronically controlled  vertical focal plane shutter.

The shutter is capable of speed from 1/30-1/1000 in half stop increments. And Bulb mode is also available. 3 zone matrix TTL metering is available with option partial (aka spot metering). In manual mode you get traditional centre weight metering. The meter has a EV range of 2-20 @100 ISO with a 50 1:1.4.

Autofocus  is TTL using Canon’s BASIS sensor. With both one shot and AI focus (aka continuous) mode.  There’s AF auxiliary lighting and the AF works between 1-18 EV. Power is by a 6V 2CR5 lithium cell. It is likely a single AF point.  The unit has a built in motor drive with a pedestrian 1fps rate. The camera uses a prewind system so your film is loaded onto the camera and then winds back into the camera as you shoot. This means if you have a muppet moment and open the back you won’t ruin more than one or 2 shots.

Viewfinder is a god size and quite bright. There is a simple matt screen with markings for AF spot and centre weight metering. Beneath is a LCD strip that shows shutter, aperture info. It also will display camera shake warning (triggered when shutter speed drops ½ stop or more below focal length and flash info. The EV compensation scale appears when comp is applied or in manual mode. There is no built in dioptre adjustment althou

This looks pretty modern. There is a Lock mode (aka off) and then you have the usual auto (geen square and PSAM option. Being a Canon PSAM reads P Tv Av and M. There an depth of field (DEP) mode which I think is unique to EOS cameras. In this you focus on your near point unit dEP 1 appears in viewfinder and then repeat for you far point so dEP 2 apperas. You then adjust frame position and take the shot. The camera calculates the aperture and focus needed to make both in focus.

The camera has 4  scenic modes (portrait, landscape, close up and sports) with preset metering and focus setting to match. You use the command dial to put camera into self timer and there’s an adjust mode for ISO

This is a EF mount camera and will support lens still in production. Unlike it’s EF-M brother I had no issues using my Yongnuo  YN50mm F1.8 with it but 3rd party lens support can be variable with EOS cameras.

The  camera can’t mount EF-S lenses but given the crop only the most ardent lomographer might wish to.

The EF mount on paper offers the chance to mount many other 35mm lens types but like the EF-M this camera’s mount is pretty sensitive. So no joy with  generic M42-EF or Nikon AI to EF adaptors but it did work with a branded K&F Koncept M42-EF mount.  The camera meters here but you get no focus assist

These are revision rather than redesign. The big step is the improved AF which is faster and the camera shutter speed goes up to 1/2000. The MD is quieter too. Other features are less handy – choice of chimes for the timer and a soft focus mode !?!

30 years after this camera was launched, this feels still a fresh easy to use camera. It functions much like a modern dSLR. Canon hasn’t changed the layout too much with that up facing command dial. i’m more use to horizontal ones that I get on my Nikons but this is a minor personal preference.

The camera is reasonably well weighted. And the grip is well suited to wielding one handed. The 2 buttons over thumb grip allow you of quickly hold in and use the command dial to adjust EV compensation etc.

AF is okay. The 1000 is reasonably good at picking a point and fast compared it’s obvious rival the Nikon F-401. But it feels slower than my later Nikons and Canon bodies. It is no surprise the 1000N has an upgraded AF chip. Likewise the other major difference is the quieter motor drive in the later camera. The 1000 is a bit on the noisy side.

I tested using a perion 28-80 EF canon kit lens and a Yongnuo 50mm EF mount. Some shots are a wee bit soft for SLR shots but I think that’s down to the optics especially in the Yongnuo where I was largely shooting between f/1.8-5.6

For beginner wanting a 35mm AF SLR this is a good choice. As a novice it has most of the features you nee. However the lack of DoF preview might be be an issue. For more season users the lack of cable or remote options make using it for slow exposures problematic.

For a good bit of kit these are cheap to buy second hand. My one cost me under 3 quid before postage and there are numerous buy it now for the £10 mark in working condition on the bay. and they will go for less at auction if you wait long enough. If you are new to the EF lens system, keep an eye to buying a lens and a body as you may pick up for less than the cost of the lens alone (but be saavy to the lens price)

Luckily the seals and mirror foam were fine on my 1000F. But in different climes or in a few years it may become an issue. A bigger issue will be shutter lifespan – for this type of camera. As with all cameras there is going to be a lifespan (here probably around 50, 000 shots). But vintage EOS cameras can also suffer from something called sticky shutter(look for stick substance on shutter blades). This can be fixed if you’re brave and steady handed enough. Just google EOS Sticky shutter, there are several solutions (so read a few) but do so at your own risk,

The Nikon F-401s (N4004s) is the obvious rival camera. Launched in 1989 as a update to the 1987 F-401, it is a very much 1980’s camera looking very much like a F4. Both Cameras (along with the 1991 F-401S aka N5005) have a single autofocus point. Whilst F-401s has an improved focus system, this still lagged behind Canon’s. Additionally all the F-401 series have a quite odd control layout. And the F401s gives you no scene modes. And you are stuck with DX coding only for film speed with no EV compensation available. However it does happily mount manual focus F mount AI lenses.

Minolta’s Dynax (Maxxum) 3000i is more like the earlier entry level EOS cameras offering just an automatic and a high speed program mode.

Pentax didn’t really have a budget AF SLR at this point, the SF series being more high end although becoming dated thanks to the EOS Series.

This is bloody good camera with a modern design that is still up todate despite being launched 3 decades ago. It will do 95% of what most folk need to do with it. It’s main weaknesses are the lack of DoF preview and no cable/remote option for bulb shots. Whilst a single AF point is adequate but not the fastest. This and the 1/1000 shutter won’t bother most folk however. Style wise I would argue it would take Nikon until the end of the decade to catch up with a mode dial first appearing on the F60.

If you shoot canon digital and want to try a film body this is no bad start for little money before seeking bigger fish. Equally it will be a passable second body to a more high end Canon. However later models don’t cost that much more for entry and mid tier bodies. If you are new to film and want a starter this might make sense if you want a AF body but would like to move on to manual focus as it can support other lens mounts with an adaptor. But that adaptor needs to be just right.

But there are alternatives

Frankly most EOS film cameras are a steal to buy. Not much more can buy you the likes of 21st century models like the midrange 300v and entry level 3000n. Only the high end, prosumerand pro models like 30V and 1n go for significant amounts but even then they are a small fraction of original costs.

If you are new to film a later but equally cheap pentax or nikon AF body like the MZ-5 or F75 may make more sense. These will offer more for AF but support older lens using their K & F mounts respectively. The Pentax will be able to happily use m42 lenses too (technically the Nikon can as well but not well due to flange distances).