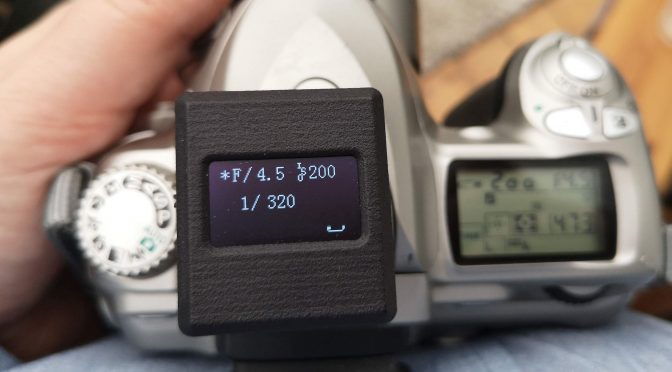 Following my review of this I’ve had a few folk asking me just how accurate the meter is. As I said at the time I think it is not bad but the Covid-19 lockdown has given me time on my hands at home so I decided to test this more fully and give some results.

The V-201X is one of several similar light meter that have recently become available on the likes of eBay, Slotting onto your camera’s cold or hotshoe it adds a area light meter for unmetered cameras with a reasonable range of settings. I’ve done a fuller review of this meter but lockdown idleness gave me the chance to do more documented field testing

Look i’ve metered this against ‘proper’ handhelds, phone apps and against the might Nikon 90x (Matrix metering) and Nikon FE (centre-weighted). In simple light it has been comparable and even when things get more complex it does as will as any of the other area meters.

Look I could have done this on film. But I needed a camera that would store shooting setting as often I’d be shooting from the hip looking at the meter not the camera.

A Question of Metering

Settings were default (AWB etc) with one exception. The D50 has Nikon’s matrix metering system. This first appeared on the Nikon FA but would pretty much be the de facto metering of most of the subsequent AF film SLRs and then the digital ones. Matrix metering works by dividing the image into areas. Software camera then determines the optimal exposure.

The 1986 FA sounds impressive with 5 segments for metering and software build from over 100,000 comparative image. But in the D50 there’s a whopping 420 metered segments. Whats more with the right lenses the D50 can also adjust for focus and colour (contrast and intensity). It has what is called 3D Colour Matrix metering.

That’s not just bringing a gun to a knife fight. It’s the equivalent of bringing the HMS Queen Elizabeth fully laden with jets,

But you can turn it off. Like most modern dSLRs the D50 offers both spot and centre-weighted (75%/25%). I plumpted for the latter. This still usually more accurate than area metering

For testing the camera was either locked to 200 or 1600 ISO. Whilst the meter has a wider range this was truer reflection of average film speeds and beside it became apparent what mattered was the meter’s ability to sense light levels. It was more than capable of taking that value and outputting a result

There are a few times when the Nikon came up with a marginally more split speed than the V-201X could read at. I would round in the calculations to the nearest V-201X speed (e.g 1/13 in dSLR was treated as 1/15). For the test the Nikon was in aperture priority mode.

I managed to do some test shots from EV (100ISO) 0 to 16. Due to the lockdown I decided against taking this on my daily dog walk as I needed to note settings and spend much longer setting shots up so I could read the meter. So everything was taken at home or on the door step.

Broadly I shot in bright sunlight, fading dusk light, indoor and night shooting. Did it try and meter for background street lighting at 3 in the morning at 25 ISO? No I did not – frankly I have better things to do and if you wanna do that it’s likely you’ll be using a bit more serious kit

The shooting I did is more real world.

For simply lit shots there was a high degree of correlation between the V-201X and camera. 86% of test shots were within 1 stop of agreement (86%) and 75% were within a third of a stop. The 14% of shots with greater than 1 stop difference were all in complicated lighting.

Even at EV(100 ISO) Zero in this dusk shot it did pretty well. The D50 used a shutter speed of 1.3sec (f/4.5 1600ISO). The V-201x suggested 1 sec. And this is complexly lit with both fading daylight and artificial light from a window lighting the scene

And so it was right through the range.

Interestingly there were some shared faux pas. None of these were a surprise. For example both underexposed this shot. i deliberately lined up the sky centrally (the sun is just out of frame).

The V-201X over estimated the light exposure to the same extent the Nikon did. I was using a centre weighted metered camera I’d have added about 1.5 stops for EV compensation.

Let’s be honest this is what you wanted to see.
Where the meter significantly varies from camera. But infact they were all explainable.

In the shot below the meter suggested a 2 stop faster speed. The shot in camera would to me benefit from perhaps a fraction of a stop longer exposure. But I’m not worried.

Of the low light outliers one is easily explained – mush of the lighting is coming from the rear creating a backlit effect. Here the Nikon’s centre weighted metering focuses more on the dog’s head. The V-201X measures the whole area equally meaning you get almost a 3 stop differential (1/250 vs 1/800 with f/4.5 @1600 ISO). When the dog moved to the periphery the next shot was within 1/3rd of the meter,

The other is harder to explain. In this shot of a stove, the camera shoots at 1/6 and arguably over exposes, the meter says 1/80 almost 4 stops faster.

You get a similar result but for the same reason here with fairlylights. The camera bases the bulk of the exposure on the central lights

Giving it spot on exposure. The area meter V-201X applies a reading across its angle of view leading it to suggest a much longer (1/60 v 1/320) exposure

But there was one occasion when the tables were turned. Here the camera arguably overvalues the near white dog and cushion .

The Meter suggested over a stop slower speed (1/500 v camera’s 1/1250). I Turned on matrix metering again and the camera agreed with the V-201X resulting in a better exposed image.

If used to meter simply lit scenes this meter proved pretty accurate compared to TTL Centre-weighted 21st century camera. It was an impressive performance. For more complex lighting it can differ but that would be true of any area meter.

It’s just a shame it can hard to use in bright light.