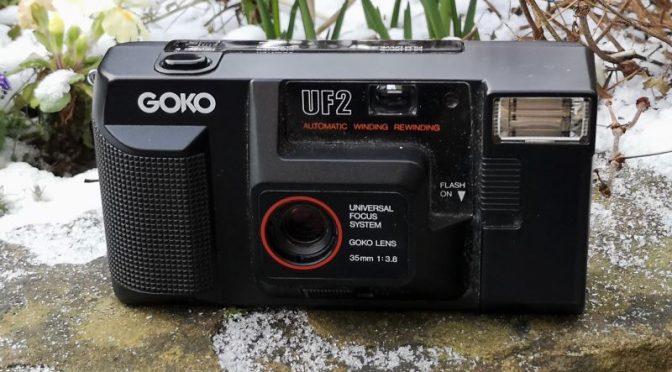 The Goko UF was one of my better finds from this little known Japanese company. But they even gloss over it in their history in favour of this model. But why is that and is the UF2 any better ?

Goko are still in business and still make camera lenses but not bodies. Back in the 80’s they developed a new lens design for fixed focus cameras known as Universal Focus (UF) which allowed both close and long focus. The company still bigs this up on their site. Especially as it would allow them to become a massive maker of entry level cameras for better known Japanese makes.

But it wasn’t the orginal UF that achieved that. It was the UF2.

Lets be clear there were not high end cameras. Goko had spotted another market

In fact Goko was not alone in targeting that market as most makes would produce stripped back more basic cameras during this period and even before. The Agfa click III for example sold for export to India back in the 70’s.

Whom Goko produced cameras for isn’t known officially. But I do wonder if camera like the Olympus Supertrip or some of the Ricoh YF series have some link.

The original Goko UF lands in 1982, a basic fixed everything flash camera with a stunningly good lens. There are 2 versions of this – one has no settings. But another exists with a slider moving between 2 ISO speed settings (adjusting the aperture I guess). It may actually be the mythic UF-1 which was launched in 1985 according to camera-wiki. It’s a model I’ve never seen a photo for but have seen lots of UF with the ISO switch.

The Later models have DX coding and some have AF. But most remain limited in terms of exposure control. Here is the list of the models.

This a fixed focused 35mm viewfinder like it’s predecessor. It is plastic bodied with an even more distinct 80’s look. It looks like any other cheap camera of the era. Like the UF it has a clear plastic panel above the lens that does it’s best a trapping dust inside.

Optically there is a coated 35mm 1:3.8 Universal focus glass lens. I’m guessing it likely has fixed shutter speed around 1/100. It differs from the UF in having a motordrive and an adjustable ISO setting. The latter changes the size of a 2 blade aperture to the rear of the shutter. The options are 100, 200, 400 and that weird 80’s setting of 1000 ISO.

There is a sliding shutter cover which also locks the shutter. You get no tripod point – not surprising given the lack of a timer or cable point.

It has a fairly standard loading system for a motordrive camera. Pull the leader over take up drum and the camera should do the rest when you close the back and press the shutter. You set the ISO by a slider on the base. I found mines incredibly stiff. Motorwind not only moves the film counter on top-plate but also a film drive window so you know it’s winding okay. You need to push & hold a switch to rewind the film.

In low light as you depress the shutter a red LED beside the viewfinder comes on encouraging you to use flash. This is manually turned on via slider at the front. The shutter button need a bit of depression to fire which I like. I’ve had too many cheap compacts with too little movement range on the shutter meaning you take the photo before you get a chance to respond to the low light circuit. The viewfind is simple with no framelines. It is okay but shots close can be slightly off centre.

The winder isn’t quiet but about average for cheap camera. When you end a roll you need to rewind manually. Like may cameras it won’t wind on until you release the shutter. Handy to know if you want to use for street photography.

The savvy amongst you will have realised you can exploit the changing aperture to let you shoot in lower light (for example with 400 ISO dropping the setting to 100 ISO). You will of course need to ignore the lo-light circuit.

Goko certainly make areasonable fixed focus lens. There is minimal pincushion radial distortion on most settings with little or no vignetting. The focus does live up to the UF reputation with being okay to good at near, medium and far range. It’s not razor sharp but more than passable for standard size prints. Long shooting is a smidge worse but still okay making this optically much better than many a big brand cheap fixed focus.

The images don’t fall off that much at the edges or corners too. ther is a little deterioration but again not bad.

The exception is 1000 ISO setting where the image softens a bit more especially on long shots. Vignetting also can just be noticed. It’s likely down to diffraction and you also notice more weakening at the edge of the frame than you do with 400 ISO film. It’s not awful but having shot some 800ISO on this I ‘d stick to 400 ISO or slower.

This camera is way better than many of bigger brand rival simple cameras optically. It would make a good choice of cheap fall back basic camera where you don’t wanna expose for vintage or expensive gear but want more than a disposable or very basic plastic camera.

It lacks the charm of it’s rare predecessor the UF IMHO and is a bit of a 80’s black brick. Diffraction makes the ability to use 800-1000 ISO film limited. Now it and its siblings win the turf war against low end fixed focus cameras. But better cameras like the half frame Olympus PEN EE series are much better optically and have decent exposure control.

So in summary pretty good for 80’s fixed focus Brick but styling lets it down.

The Olympus Supertrip is actually similar optically and I do wonder if Goko had a hand in it. It isn’t motorised and therefore quieter in use although it pegs an upper 400 ISO speed. The Konica Pop is a more robust and much better locking camera but similar spec – later Pop models are worth a look too. The Hanimex 35SE is more simple but also has a surprisingly good lens and looks better.