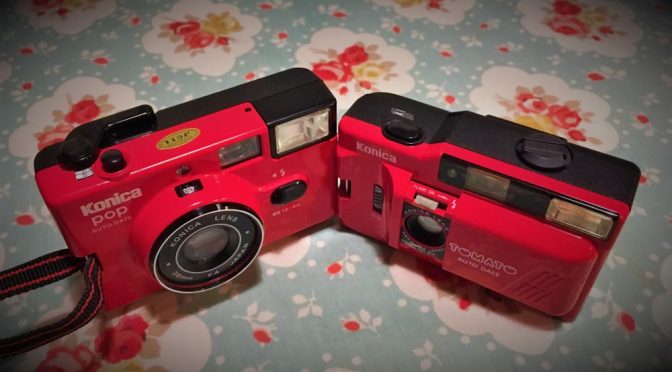 The Konica pop has acquired some zeitgeist as the a potential king of the fixed focus flash compacts. But how does it measure up wehn compared against it’s successor the Konica pop 10 (here in the sought after Konica Tomato guise). Which one is flavourful and which is a bit mushy ?

The pop is an immediate continuation of Konica’s C35 Flash compacts. Arriving in 1982 as a descendant to the world’s first flash compact the C35 EF. It was sold in Japan as the C35 EFJ and was sold alongside more advanced flash compacts like the C35 EF3.

The pop-10 is a later mid 80’s more mechanically simpler model. However it broadly works in the same fashion. Both cameras are simple fixed focus cameras of the Olympus Supertrip class.

The underlying mechanics are identical. Both cameras have a fixed shutter speed purportedly of 1/125. The aperture is essentially fixed to film speed in normal use ( 400ISO film sets f/16, 200ISO f/11 & 100ISO f/8). When the manually triggered flash is in use the aperture widens 2 stops. Both have a close up switch intended for use with flash at around the 1.2-2m mark which narrows the aperture back by 2 stops

My later pop supports 43mm thread filters (Al Mullen indicated in his review on this site the earlier one takes 42mm). Neither are cable threaded but only the pop has a tripod point. The pop sports a GN12 flash powered by 2xAA. The pop-10 features a GN10 flash powered by 1xAA. Neither actually needs the batteries to work – they just power the flash and the low light warning circuit

My pop is without doubt the most delightfully over engineered Supertrip class camera I’ve ever held with full winder lever and a novel folding (but pointless) sprocket system.

The later model I have notably lacks the hexanon lens logo. There are some other changes with a split part transpartent lens cover that opens as you depress the shutter. The ISO setting now sits underneath the lens barrel (with setting read on top). My later model fits a 43mm thread filter (Al in his post said 42mm)

The pop can be found in a array of colours.

Where the pop-10 differs

The pop-10/tomato is a more conventional looking camera of the class. The engineering is simpler. The lens is protected by a sliding door. There is no filter thread here. The winder lever is gone replaced by a thumb wheel and there is a more conventional rewind knob. The camera feels smaller but bar the knobs and levers really isn’t much

The Pop feels more comfortable to hold than the tomato but only by a margin. The tomato requires you to open the sliding door where as the pop opens the lens cover on shutter depress. The tomato has a slightly less distorted basic viewfinder but both at least come with frame & parallax lines. If light is too low a LED comes on to encourage you to use flash with both cameras . And both have a switch that adjusts aperture if taking a close shot.

Konica provide quite a high amount of detail for both cameras and that allows us to look at the hyperfocal distance. There’s good and bad news there. With 400 ISO film (aka set a at f/16) the depth of field extends out to infinity. Drop that to 200 ISO (f/11) and the far acceptable limit is just over 10m !

And that shows on shots. This is a camera that was intended to be used close but if Konica had pushed the focal point back to 5m even at 100 ISO things would have been more acceptable.

Both cameras seem to get exposure similar although I found the low light LED came on sooner for the pop-10. Broadly if you pay attention to it and don’t shoot in challenging light both will be reasonably well exposed

This gives us a sense of distortion and right away there’s an obvious difference. Both have a bit of pincushion distortion but it’s way more noticeable with the pop-10

Sadly both cameras are really soft due to the poor DoF and this shows on these images.

Increasing the aperture by 1 stop makes a massive difference in terms of DoF. Whilst still soft but more tolerable. The pop image is better than the tomato/pop-10 but only marginally.

So both are sharper here at around 2 meters as you would expect but the optical distortion is quite obvious on the pop-10/tomato. Just look at the bottom left chimney !!

Both cameras performed well enough and share similar strengths and weaknesses optically although the pop is that bit better optically. However they really are only for shooting a few metres away unless you’re loading with 400ISO or using that setting.

Both were geared for taking flash shots and they don’t disappoint. stick to around the focal point and you won’t be disappointed although red eye is an issue.

When used close in these are amongst the best of the supertrip class cameras. The pop is better optically and a fantastic although somewhat over-engineered camera, The Tomato is almost as good and more pocket-able. The problems is the focal point. The camera struggle at distance unless shooting 400ISO

These do what they were intended and are fun, the pop beats the tomato in image quality and design although the pop-10 is more practical to pocket. It’s just there are better fixed focus simple shooters.