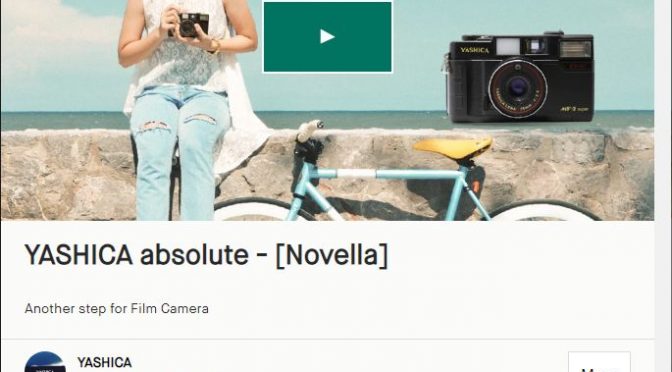 As 2019 draws to a close you don’t need to watch the Eastenders or Gavin & Stacey Christmas special for a festive cliffhanger. Over in Crowdfunding land, a certain Yashica is running out of time to get it’s new 35mm film camera funded. And there’s even been some backer pull out.

It’s a massive turn around for this company. In 2017 they launched the Kickstarter for the Yashica Y35 digital camera. Hitting their target within 4 hours of launch, it would go on to to be overfunded by over 1000% of the target of HK$800,000. Almost 7,000 backers chucked in over HK$10 Million funding.

The company’s next outing the MF-1 a reloadable disposable and some branded film. These were also overfunded but to a lower level. 318 backers pledged HK$ 145,609 of funding (target was HK$100K) a much smaller pot than the funding for the Y35

This is probably the most interesting New Yashica camera before. It is a proper 35mm camera although pretty low end. As a camera reviewer it would offer an interesting real world comparison as it is on paper & looks identical to the Kyocera era Yashica MF-2 Super that I reviewed a few months back.

Given Yashica’s ability to actually deliver a product. IMHO it would have provided a new 35mm camera with an okay lens and some useful features. It’s fixed focus and exposure sure. But the camera would be a step up above the MF-1 and the plethora of toy plastic cameras.

It may be that folk just feel that it isn’t that much of a jump. And isn’t worth the price when you can buy a mju-1 for that sort of money. But I don’t think so. The Reto 3D and Diana Instant Square were both funded easily and the MF-2 sits between the 2 in costs.

The big reason IMHO is public perception. Although the Y35 was an incredibly successful Kickstarter as I’ve discussed at length there was some weird unrealistic exceptions going on. The company were clear what was on offer with the exception they seemed to offer some shutter control early on . And it was around about £120GBP for a limited run camera. But some folks still assumed they were getting something in a metal shell and in the league of digital leica. Don’t believe me ? Well for example there was a backer whom genuinely thought he was getting something like a Epsom R-D1.

The Y35 was slagged off in the blogshere and news sites before it even arrived. Worse the build quality wasn’t great and a a few were defective at launch. This led to some pretty angry posts which were picked up by photography blogs and news outlets.

This may have dented the MF-1 Kickstarter a bit. I really can’t fault Yashica here – they delivered what they promised. But that promise under the hype was a generic lo-quality build reloadable disposable. It wasn’t awful but was a bit pricey compared to established models like the Lomography Simple Use. It got less of the vitriol but a lot less press. It was more a Meh…

If you are willing to take some risks reloading a Kodak funsaver is cheaper, more a challenge and offers better image quality.

If I’m right about that then it’s a shame. The MF-2 offers something a bit better. But when you can pick up a Konica Pop or even the orginal MF-2 Super for a few quid. Is there a market for this anyway ? Maybe I’m wrong. Maybe “These are not the high end compacts you are looking for” my Old Friend Obi Wan would say.

One thought on “Is The yashica MF-2 a Kickstarter Too Far ?”