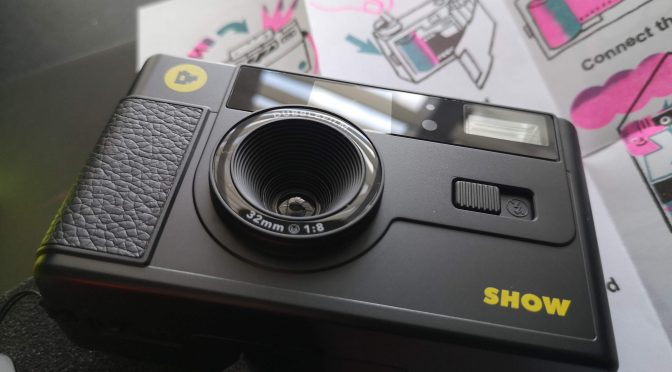 2020 has turned out to a bit of a contrast then. In the General world it hasn’t been great has it. But oddly In the film photography world things have been quite interesting. We’ve had a series of new products from film, to camera to gear. Now cheeky tinted film makers Dubblefilm have decided to join in the camera market with their Show camera. One landed on my doormat this morning and I’ve been out using it.

As most of you know I don’t do my own D&P so a fuller results review of the Show will follow in a couple of weeks.

(update the full review can be found here)

Dubblefilm are best known as one of the players in the tinted/pre exposed film market. The company’s roots can be found in a phone camera app called Dubble launched back in 2013 which allowed users to blend their images often with other users. adam Scott the founder took these ideas and feedback from the community and launched Dubblefilm in 2017 initially partnering Kino but now Revlog.

So What’s the deal with the Show ?

As Dubblefilm put it “A fun, affordable 35mm reusable camera with flash.”

I’ll leave the affordable bit til later. What the camera is a simple fixed focus 32mm lens with a shutter locked at 1/100, no metering and little exposure control. It has a built in manually triggered flash. Oh and the film plane is curved to improve focus. You’ll be shooting at f/11 (most of the time).

The Show comes in Black or Pink Neon. I ordered black….

Oh not another reloadable disposable ?

You’d be forgiven for thinking so. I guess there has been a vogue for these over the last year or so with the Trashica … ops I mean Yashica MF1 arriving just over a year ago and both Kodak and Harman (aka Ilford) have launched identical cameras into an already established market.

The spec sound similar. But it isn’t

So What is the Dubblefilm Show ?

Dubblefilm have never called the Show that. I guess the terms reloadable or reusable encourage that view. But it differs subtly in 2 ways

Firstly the Show has a conventional film loading mechanism. this instantly moves it up into that vast lo-fi fixed everything flash camera class. I say vast in a second hand sense few cameras are made today in it. My site is littered with these. It also means it’s more related to the likes of non flash VUWS

The second feature is the aperture is changeable. Not that you are immediately meant to think of it that way. But when you switch on the flash the aperture moves to f/8. This again is not uncommon as given the single AAA powering the flash, it isn’t going to be speedlite blinding. Dropping the aperture for flash is a not uncommon feature in it’s class. and any Lo-Fi shooterworth their salt knows drop the battery out and you now have a camera with switchable aperture size

I used the word unboxing figuratively. The camera doesn’t actually come boxed (excluding any postal transit one). It sits inside the included Plastic case on a black plastic foam space filler all wrapped up in a plastic wrap.

At this point I felt Greta Thunberg’s eyes burrowing into my soul. Lotta Plastic packaging for 2020. And let’s be honest – given the case is like those pointless zip cases you get with old FSU compacts. But without the padding and in day glow neon.

I suspect a they will end up being more PVC off to the dump . I’m gonna keep something in it Greta I promise !!! But I’ll either keep the camera in my pocket or camera bag.

There is no film, no batteries. there is a neon orange lanyard that is kinda cool – that a keeper even if the camera isn’t. there’s a single sheet with instructions and a Neon artwork by Jose A. Roda (me neither had to google him and he’s not on wikipedia).

I’ve heard it muttered this looks a little like a Contax T2 and weirdly the black version does. Granted there is no titanium here just cheap plastic. But that plastic seems well enough made.

Not sure I’ve seen a pink Contax though…

Frontplate has that contax like lens bezel with Dubblefilm logo above . There is a slider for the flash which is silent in charging. No whine I can here but I am yet to test it on the dog or the kids higher acoustic sensitivities (Hot tip – the Diana F+ flash doubles as mosquito noise teenager deterrent device). There is a small grip to the side of the lens.

The camera may look classier than it is is thanks to 2 sensor points between the viewfinder and the flash. these appear to serve no purpose and don’t have any LED, sensors etc behind. I suspect this means the OEM manufacturer re-used a plastic piece used on a camera with some sensor technology,

Top plate features shutter button, film counter flash ready LED and the standard rewind point. There is a standard rewind depress pin on the base when you finish and a compartment for the battery. there are no tripod or cable points.

On the rear you get the thumbwheel winder and sme grip surfaces. THe camera holds well enough in hand.

How does it handle ?

Not bad. Loading is easy enough as it’s a conventional mechanism unlike those reloadable disposables. The camera coped without issues with a 36 exp film. The film counter is reasonably visible and flash is silent in charging. I found the shutter button doesn’t take a lot of travel to fire which suits me.

It is light enough for single handed use.

You mentioned about the Affordability ?

Dubblefilm sell it for €55Euro (that’s just over £50GBP at the mo) before postage. Mines came from analogue wonderland for a comparable price.

Now that is a lot more than the reloadable disposables. Lomography sell their Simple use for £16.90 with battery and a roll of black and white film. The Harman Reusable can be got on Amazon for £35 or a bit less on eBay and that comes with 2 films. I would caveat that by mentioning whilst the Harman has the best lens in it’s class it is buttock clenching uncomfortable to use. *

But this is above this group. It is hard to do a comparison as nothing like it is being made. A VUWS clone BNIB costs way more as does a new Diana Mini or Sardina with Flash units. Perhaps the nearest thing is the new Yashica MF-2 Super which sells for HK$799 (around £80GBP) before postage. It is however glass lensed and has more features.

I have to conclude this is perhaps just a wee bit over priced but not by much. and good on to them – There is no one else making a camera in this class to my knowledge

I’m holding judgement until I get the images back from the lab.

But on first glance I am quietly impressed with the Show. It is a lo-fi class camera from the 1990 born again and seems quite stylish (in Black) and well enough made. It sits in a class on it’s own. Pricewise it isn’t far of the mark for small run camera. I just wished they’d used less plastic to wrap the thing and the case is just neon frippery that I suspect will also end up in landfill.

Bear in mind this is one of the things that might lead to to better film cameras down the line if big companies see a demand. But if cash is an issue you have some options.

I’m a skinflint and it is 55 Euros – what’s my alternatives ?

i’ve mentioned the reloadables. If you want a new camera I’d recommend the Lomography simple use as the best currently made (their older Lomolitos is better IMHO if you can find but leave the batteries out)

Secondhand the range of simple fixed everything flash shooters is massive. The Goko UF is the killer camera that is worth hunting down but rare. Haking’s Halina Panorama and it’s rebranded siblings have a cult following and you can remove the pano mask. The Halina Vision XF and the Vivitar T201 Lx (aka Kodak KV250) offer disposable like Lo-Fi performance but with easy reloadable. The Konica Pop is just a little step up and a great looking camera for about a tenner. Or the Hanimex 35 SE for a more featured but retro lo Fi

5 thoughts on “The Dubblefilm Show – Unboxing and First impressions”