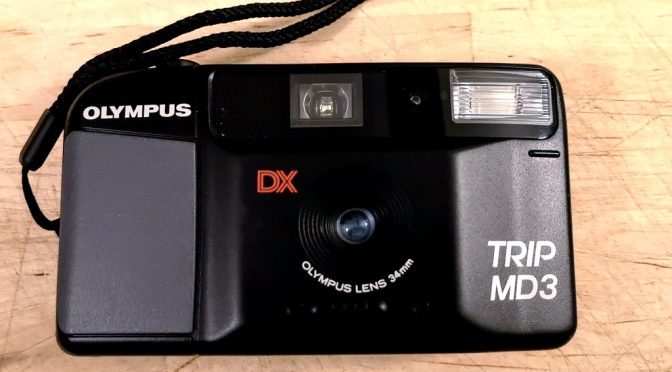 So my quest for the Olympus Lomo continues with another offering from the Plastic Trip series. Could this older model knock off the Trip 505 from the most Lomo like hot seat ?

Is this a lo-fi gem, a pile of junk or an actually okay camera. Grap your whip and Fedora and join us on this journey across erm…. the foot bridge.

The quest has taken us down the dubious tract of plastic trips before. We’re looking for an olympus camera that has the quirky hallmarks of a camera like the LC-A with colour film. So we want lo-fi but not crap-fi.

And the Plastic Trips hold the key.

Trip cameras were divided into 2 groups Auto Focus and more simple fixed focus affairs. We’ve seen a few of the latter already including the likes of the Supertrip (much better than you’d think) and the Trip 500 (just awful).

The MD series of cameras began in the late 1980’s. They herald the arrival of the motor drive in the series (which pretty much ever trip had bar the Supertrip and Trip AF had). Four cameras bear the logo before Olympus realised pretty much ever camera would have motordrive. There’s the Trip AF MD and 3 fixed focus models ingeniously titled MD to MD3.

The specs in the manual are pretty standard for the class. We have a fixed focus 3 element 34mm 1:6.9 lens and a fixed shutter of 1/125. The aperture appears fixed as the only exposure consideration the camera appears to make is whether to turn on the flash or not.

Olympus rate the focal range from 1.5m to ∞ but as usually that’s a bit hopeful. If Olympus focused it to the hyperfocal distance of 5 ½ metres you’d get 2.5m to infinity. Irritating the MD3 drops the landscape button on the MD2. This is not great as we’ll see.

A single Green LED tells you the flash is charged to the side of the simple Reverse Gallilean viewfinder. This does at least have non-parallax frame lines

Part 4 Journey to the QC

The camera is a typical early 90’s plastic lump. Inoffensive is the best I can describe it. The rear of the camera looks like a QD version should exist but I can’t find one.

it’s okay to hold but not as comfortable as some other cameras of the era. Loading is easy with an easyload drop in system (a indicator on the toplate beside the film counter indicates if winding or not.

Simply slide the switch to open the lens cover and unlock the shutter button and shoot. The motor drive is not that refined noise wise and not quick. You will need to manually move a switch on base at the end of roll to rewind.

Although auto, the Flash actually kicks in better than many a more pricey camera. probably as you’re stuck at f/6.9.

If you expected tessar quality sharpness you’re reading the wrong blog post mate. We have a simple fixed focus 3 element lens at best in a Cooke Triplet.

The good news is this is actually okay at taking photos at close to median distances. Yup it ain’t sharp but it is okay. The quality falls off to the edges but there is no vignetting.

It doesn’t do shots over 10-20m particularly well and some fringing starts to creep in. There is quite a degree of barrel distortion although you’ll only notice on straight lines.

It overall is better than a disposable even the great Kodak FunSaver.

It actually does well enough with exposure if you don’t push it. the lens is prone to flare and this can be quite unpredictable.

6 Final Thoughts – Not The Road to Lomo

So this an abject failure for the quest for the Olympus Lomo. That’s not because it is bad, in fact it is alight for what it is. And that’s the problem it is far to competent and quirk free

As a camera it is okay in the close the medium distance and with negative film it makes sensible use of the flash for exposure. It is better than a disposable and for a cheap film camera for party shots or trips out you could do worse. Just don’t rely on it for long shots and it is a tad noisy and clumsy.

So I wouldn’t pick one up. The 505 still leads for the moment

The more basic Supertrip produces better shots and with a bit of thinking adds some exposure control. Konica POP cameras are a worthy camera in the class and offer a bit more cult appeal. The Ricoh YF-20 is an ugly lump but optically better and like the Supertrip offers the option of exposure control by adjusting ISO. The Hanimex 35SE is also worth a peak in this class but offers some notional exposure control