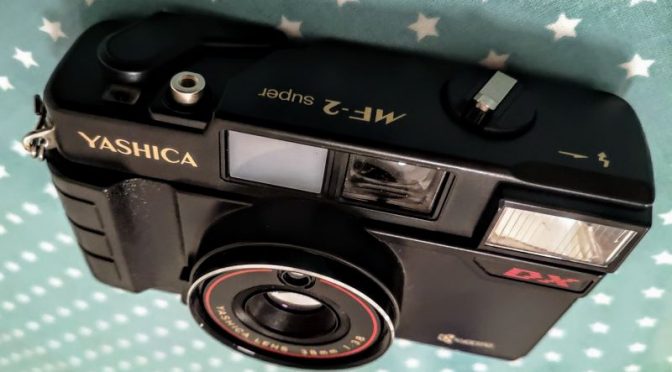 As I sit and type this the first Film Camera to bear the Yashica name in over a decade is winging its way to me from Hong Kong. Whether the New MF-1 is any good or more likely not remains to be seen. But the new Yashica are also hinting at 2 new cameras. In the long term a 35mm version of the Yashica-44 TLR but perhaps more imminent is the MF-2. Turns out the MF-2 is based on the 1980’s MF-2 Super a fixed focus flash cam.

So you know, I decided to test the original.

The Knives are out for the new Yashica after the launch of the Y35. The vitriol has been turned on the new MF-1 before anyone has had a chance to use one. Granted that looks like a re loadable disposable. But what of the MF-2 if it ever arrives ?

Back to the MF Future

The MF series was not the high point of the original Yashica’s range. It began reasonably enough with the Yashica 35 MF in 1977. A zone focus camera with built flash that joined the craze for flash compacts triggered by the Konica C35 EF. The 35 MF offered programmed automatic exposure and was followed by the similar MF-1 in 1979.

Things went downhill with the 1980 MF-2 which was fixed focus and had no real exposure control other than the ISO setting setting the aperture à la Olympus Supertrip.

But it’s not that camera that’s coming back. And some would say it’s not a true Yashica.

In 1983 the once mighty Yashica was acquired by Kyocera. Although Kyocera would oversee the likes of legendary Yashica T* series and Samurai series, this was regarded as the low ebb. That was until the Y35 arrived.

The MF-2 Super appears to be a re-hashed version of the MF-2. The only notable differences being the camera sets the film speed by DX coding and there’s a mechanical self timer.

There’s a lot of these on sale & lots of no so helpful YouTube reviews of this camera from South Asia (no it’s not a rangefinder and would it kill you to give a camera spec & some sample results when reviewing !!). Suggests Kyocera were going for the emergent economies.

The Cas e of the Missing Specs

Info on this camera is sketchy to say the least. There’s several Japanese sites with some semblence of specifications and Lomography’s Lomopedia. I’m indebted to Chris from yashicasailorboy.com (a great blog for Yashica fans BTW). He’s helped me with some specs from the manual which confirms the listings from elsewhere and my own experience. There’s also a bloke who tears one apart on Youtube but it doesn’t really give you much insight. But it is rather entertaining to watch.

The fixed focus 38mm 1.3.8 lens is described as a triplet construction with at least a coated front element. Lomopedia quotes a 1m to infinity focus range but I’m inclined to believe the Japanese sites with a 1.5m-infinity range.

The camera a fixed shutter confirmed in the manual of 1/125. Matched with just 2 aperture settings – f/8 usually or with flash setting f/3.8. There is no difference whatever film speed you load.

There is a Data Back version available.

This is a camera evolved from a late 70’s flash compact and in truth little in its styling is different. Although it’s got Yashica on both front and top plate, Kyocera make clear whom is in charge by the decaling.

And it looks like a 70’s flash compact and it’s neatly styled if that’s your thang. However unlike it’s 70’s predecessors this is much more plasticky. My one’s battery compartment door doesn’t fit snug and indeed I’m not convinced the electrics always work. This may be due to damage in use but the camera is fairly immaculate. It does feel like a build quality issue.

The camera is easy enough to hold and it has an easy load system. The pressure plate for film plane is flat.

Not much here of note load, use the lever winder and frame and shoot. The viewfinder has a bright lines for frame markings and a red LED is also projected in with low light. The manual flash is activated by sliding to side. It has a cable point, tripod mount and of course the mechanical timer.

This is a game of 2 halves.

From an exposure viewpoint, the camera relies on film latitude and you turning on the flash in the dark. This means inevitably a lot of 100 ISO shots turn out slight under exposed if you shoot on dull days. And of course with 400 ISO shots get over exposed on bright days.

Of course the wise amongst you will have noted you can of course slide out the batteries. This allows the exploitation of the wider f/3.8 setting without flash.

Optically things are actually not bad. There is only a mild case of pincushion distortion but the lens is okay especially over 3-10m. You couldn’t call it sharp per se. But it’s better than the average plastic lens and around average for a Japanese rival of this class. Go beyond 10m and things drop off and the 1.5m is a serious warning for close shots. The sharpness holds itself almost across the frame too, just dropping a bit at the edges.

The camera has no parallax adjust lines. On closer shots using the viewfinder means you’re prone to over shoot your target.

What it should costs

Pay around a tenner plus P&P.

A konica POP this is not but it is a reasonable attempt. It joins the ranks of many a 80’s cheap fixed focus flash cam on that lines. It’s lens is good enough for the class but crippled by the fixed aperture. Cameras like the Pop and the Olympus supertrip adjusted aperture for film speed and they are much better clinically choices.

But it does however trounce some later rival cameras with the same fixed everything settings like the Konica EU mini. And it also comes with a the option for filters, cable and timer. Meanwhile the lens is actually quite good within the limitations of a the spec. Just a shame about the build quality which is shocking given the name. If you fancy this class just buy a POP or a Supertrip or if lucky a Goko UF. If you can live without flash and 36 exp get a VUWS clone.

Irritatingly that would be an original MF-1.