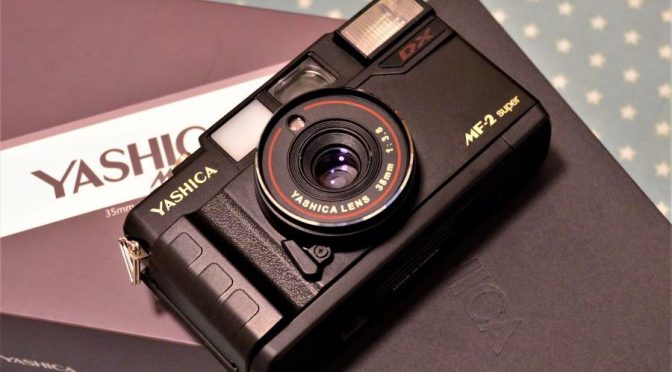 When the New Yashica announced the MF2, let’s be honest it wasn’t met with much excitement. But they got enough kickstarter backers and actually delivered a camera that works. But is it as good (or should I say mediocre) as the camera it essentially reboots, the Kyocera era Yashica MF2 super? And should you bother with either?

Yashica was one of the legendary japanese camera makers that came to dominate the 2nd half of the 20th century in terms of cameras. Some of its cameras hold mythic status and some still command big price tags on the used market. The name effectively died in 2005 when Kyocera (whom acquired Yashica in 1983) pulled the plug on all camera production. the name would sadly limp on as a HK based holding company bought the right to use the name and some rebranded Low end digital appeared made by the likes of W.B. Haking (aka Halina).

Then about 2017, the name appeared back. First with some clip on phone lenses and then came Y35 DigiFilm camera. This turned out to be a gloriously awful launch. 90% was down to unrealistic exceptions (with folks honsestly expects some reborn classic in digital format for about £100GBP) and 10% down to marketing hype. This was followed by the MF-1- a re-useable disposable – a serviceable but weird choice

Then came the MF-2

The MF-2 is actually a rebooted old camera the Kyocera era Yashica MF-2 Super. This is not one of Yashica’s classic or better known cameras. It feels out of time in an era when ultra compacts or compact AF cameras were King. Launched between 1983-1985 it looks more 1970’s but was geared for developing Markets like South Asia.

I’ve detailed both of these camera in an unboxing post a couple of months back. They share the same core spec of a fixed 38mm 1:3.8 triplet lens. The shutter is fixed at 1/125 and the camera usually shoots at f/11 unless the manually driven flash engages when the aperture opens fully. The DX coding is bloody pointless. It alters no settings bar the rudimentary low light detection system which displays as a red light in the viewfinder when the light drops.

So are they identical ?

Not quite. Handle both and you’ll notice a difference

(a) Build and Features

The plastic shell is identical but there some changes. The immediate thing is the New model is noticeably that bit lighter. There is less metal inside. This isn’t necessarily a bad thing but shows a cheaper approach to build id being used. The coating on the lenses are different but again we’re deaing with optics made now and over 30 years ago. We’ll look at the image produced in a mo.

There are 2 changes. The original has a cable point and filter thread. The new version doesn’t. I can live without cable on a camera of this class. But the filter thread is more of a loss although I guess you could use push on filters.

Well you load ’em and use them in the same way. But it become noticeable that the winding mechanism is not as smooth on the new one. The other difference I note is the it’s much too easy to trigger the shutter when half depressing button to check for low light. Granted this happens on the old one too and I’d recommend not winding on and depressing first if you need to use this for both.

Worse still is the sliding flash the old one slides over smoothly with gentle force and goes into position with a satisfying click. The new one just slides no click and minimal force. It’s too easy to knock on in your bag.

Broadly at first glace these give similar mediocre results. They are both about average for the class and sit behind the likes the Goko UF, Olympus Supertrip and the Konica Pop optically. They are best at 3-5 meters as you’d suspect and soften towards the edge and at long distance. That varies across the frame with the final image being worse on the left side on both cameras as this shot illustrates. Weirdly consistent and points to the same design optically.

Both suffer from another foible. You need to be aware of weather conditions and if in doubt go 100-200 ISO not the faster film. That’s because in both the low light meter does a good enough job of warning you to turn on the flash. In bright sunlight a fixed 1/125 and f/8 sits well outwith 400 ISO’s latitude so you could get awful overexposure

But they aren’t quite optically the same. And here’s where things get weird. At first glance they do look similar. Take these 2 shots of Annan Harbour.

Initially they look similar. There a bit of barrel distortion which is marginally worse on the newer model. But Zoom in.

Closer detail such as the writing on the near signs is crisper on the older model. But go back a few meters and the New camera is a little sharper and given this is the same film and broadly the same exposure done in the same lab, I think the new model gives slightly more saturation.

Neither camera is that prone to flare .

The New Yashica deserve some praise this is a much better camera than the MF-1 and a reasonable copy of the original. It is the best film camera they’ve made to date period. But…..

That’s a B- mark, could do better. This isn’t awful and optically not that different. But why lose features like a filter ring and why rebirth a mediocre camera with no great quirks. The Y35 for all it’s flaws was more exciting.

A good comparison is what Lomography did with the the LC-A+. It’s build quality isn’t as good as the LC-A. The standard version with the chinese made lens remains a source of debate about lens quality (a bit of a clue is the fact you can buy a Russian lensed version). But Lomography improved other areas such as interchangeable backs for instax, And there was a developing cult status around the LC-A.

Can’t really say that about the MF-2.

Interestingly Yashica haven’t put it on sale outside the Kickstarter. This probably reflects the fact they just scrapped over the backing line and there likely is’t a market. The non early bird price there is $90USD which for a small run isn’t awful – but you can buy the original for £10-20GBP.

If you pushed me into a choice I’d go old but it is a hard decision.

But not so hard in other ways as you can buy something like an original Konica Pop for the same money. that is much more quirky, has a cult status, beautifully engineered and that bit better optically .

All films were processed and scanned at same resolution by AG Photolab. Shots were taken back in early February before the Covid-19 lockdown. AG are still processing mail order films BTW.

One thought on “Rebooted But is it Suited ? – New Yashica MF2 Super v The Old One”