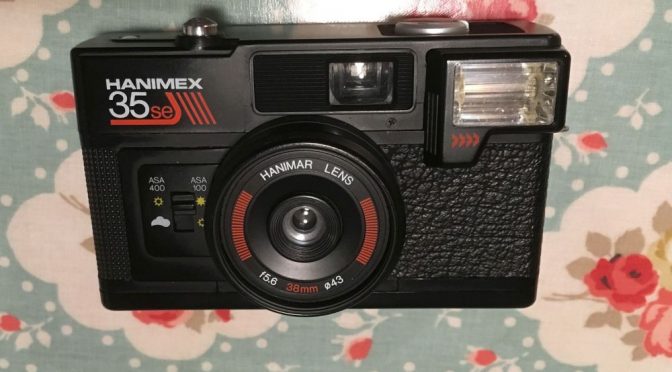 This simple fixed focus flash number was actually made by Haking and is based on the Halina Flash 350. But is this rebrand a contender in the toy cam class or just reheated left overs ? I took one for  a stroll at dawn one morning to find out.

This is a reasonable chunk of a camera with that Konica C35 EF retro style that was popular with the late 70’s flash compacts. This dates it before the Halina 160/260 which are similar but much more compact and 80’s. It had a sibling the Hanimex 35S (aka Halina Flash 300) which was broadly the same but had a wider aperture for the flash.

It is quite a pleasing chunk to hold too. Despite its budget origins it is filter threaded and has both cable and tripod screw points. The shutter is fixed but you can alter the aperture to 3 points.

The first 2 are set by moving slider beside lens which internally is matched to f/16 and f/9.5 apertures. The third aperture of f/5.6 is triggered when you slide the Flash out to the side thereby turning it on (the 35S has a f/4 setting here). The manual recommends shooting with 100 ISO film with the flash on for overcast conditions even at distance. The viewfinder is simple with no frame/parallax marks and is okay at median to long distance but closer than 3m is an issue. This is a thumbwheel manual advance camera.

The lens is plastic but at least it is a coated triplet and actually it isn’t that bad for what is. Yes, there is some chromatic aberrations,  it suffers from mild pincushion distortion and vignettes a bit at f/16 but for a plastic lens it isn’t that bad especially at that f/16. Whilst it isn’t in the same league as as the VUWS or Goko UF it is better than many plastic cameras and on some shots was remarkably clear. It helps when you get exposure right of course and it is better at f/16. The Flash aperture is much weaker  with things  notably  softer even with the flash. In the other settings it has acceptable range from a couple of meters out to infinity. The lens flares as you would expect which depending on  your view is either a curse or a blessing.

You’ll need to watch the flash with 400 ISO film as it tends to over expose a wee bit (err on the end of 3-14ft range). The 3-8ft for 100 ISO makes more sense. Remember this a manually triggered flash and there is no low light warning system. Whilst I found the lens actually not bad and other did too,  worth reading La Fille Renne’s blog post on the 35S for a not so good view  ( I suspect the only real difference is the power of the flash hence wider flash aperture on 35S)

All in the 35SE makes an interesting choice, It is has a reasonably good plastic lens and some flexibility with features like cable release and screw in filters (abet 43mm but buy a 43mm to 52mm or similar adapter so you can use your existing filters). It gives some limited aperture control. It isn’t as killer as the VUWS or Goko and perhaps in a perverse way is too good lensed for some compared to other toy class cameras. But then again it is a flexible beast.

I got the camera as part of £9.99 plus postage  12 camera joblot (admittedly some were beyond saving but the lot netted a few mint Halinas and a fantastic olympus compact). Interestingly most recent non joblot sales on ebay have seen this change hands in the £5-10 mark plus postage.