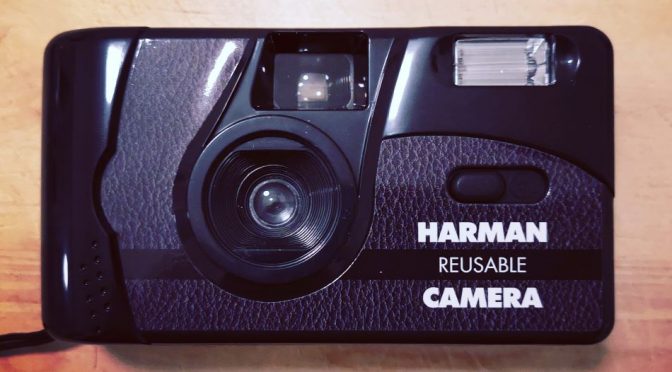 If Lomography had though they’d covered the niche reloadable disposable market, then 2019 must have given them a bit of rude awakening. First we had the Yashica MF-1 arriving. But now and more threatening is a big name make moving in with Harman (aka Ilford) Technology’s new camera

But is the Harman any good ?

I’m a fan of new cameras but 2019 has become the year of the re-loadable disposable. Oddly this is old hat. There was a culture of loading single use cameras – not the safest profession as I discovered. Lomography picked up on the zeitgeist and launched their simple use camera. Officially it is listed as a single use camera. But the company made it easy to reload and market it heavily on that point.

But in April Yashica unexpected appeared again following the Y35 debacle. They promised 3 new film cameras and launched the first the new MF-1 on Kickstarter. This a direct rival to Lomography’s simple use.

Oddly Harman Technology decided to get in on the action in October. Harman is not unfamiliar with film cameras and single use. They produce highly regarded pinhole cameras. They also offer both a Ilford HP5 and XP2 loaded single use camera (which was part of my recent group test).

The camera is made by a Third party and looks pretty much identical to the ‘new’ Kodak being touted. The Kodak M35 is sold by Sino Promise who licence the Kodak name and the camera bar being day glo coloured is petty much identical in looks and stats

So how much and what’s in the box

The camera is sold as a package with 2 x 36 exp rolls of Kentmere PAN 400. You also get a battery strap & a discount voucher for Ilford prints.

Analogue wonderland are one of many sellers whom sell it for around the £30GBP mark. But this makes it pricey versus the Lomography simple use. AW sell the B&W or standard colour versions for £17.50 which come with 1 roll of film. You could buy one and add 3 Fomapan 400 36 exp rolls for the same money.

The Harman Camera is a simple 1 element 31mm fixed 1:10 lens camera with a fixed 1/120 shutter. There is a manual triggered flash powered by 1 AAA. The bulk of the camera including lens is plastic. the film plane is curved but so are almost all cameras in the class

The fixed focus is meant to be 1m to infinity. Plug the lens details into a hyperfocal calculator you get a 1.6m to infinity range. That’s assuming the lens is focused at the hyperfocal distance.

This a lump of shiny black plastic with some tacky faux leather stickers on the body. It’s not small. The plastic feels solid but the camera feels a tad dated stylistically especially compared to the rubberised MF-1.

But the build shows it’s use when you load it

This is a simplistic camera. Just a shutter button, switch to turn on and off the flash & the winder. But it’s the winder that’s the issue. It is bloody tight in use. I put it down to the fact i used a 36 exp roll. However it was the same with a 10 exp geek squad roll.

If you’ve ever loaded a well used VUWS clone with a 36 exposure roll and have got to shot 33. It’s that tight, the camera is going to exploded feeling but much worse. It really isn’t pleasant and kinda ruined the experience.

The camera has a conventional load system but the rewind release knob on mines was increadibly hard to depress. My one requires the careful use of a fork & feels like it will go snap at some point

I loaded XP2 my usual B&W for test and the roll was processed by AG Photolab.

This actually quite good for what it is. It would probably have won the MF-1 v disposable group test on results.

The camera seems matched to the hyperfocal distance. On the plus it is better than most cameras in this class at long shots. They are a bit soft but much better. Of course it does mean you need to stick to subjects over a metre and half away.

As you’d expect it softens a bit to the edges and a little at distance. There is some barrel radial distortion but not much. There’s a little vignetting but not too bad.

I’d recommend 400 ISO negative with this camera. Yup you’ll get away in good light with 200 ISO but the stop makes the difference. You’ll be relying on latitude for exposure control. That’s probably why the XP2 shots turned out better as that film has great tolerability.

On one hand this seems to deliver best optics quality I’ve seen in the disposable/reloadable class. But the experience is awful and just put me off. I felt my Kodak Single use camera felt more comfortable to go and it is still working after 6 rolls. I’m not convinced the Harman will last as long.

I also have a issue with these things full stop. There are loads of turn of the century lo-fi cameras that you can source for peanuts. I shot the Haman alongside perhaps the crappiest Olympus ever sold – the Shoot & Go R. Optically there’s not a lot in it and they both are dull lumps of black plastic. But the Olympus doesn’t feel like it will explode on winding. It also had a few frills like 2 ISO based aperture settings and an alleged red eye feature. It cost just 99p before postage. And I can reload it with 5 rolls of Fomapan 400 just £26.99 on Amazon (at the time of typing) .

And that left me looking at the Haman and saying why bother?

A more upbeat review can be found at Emulsive using the Kentmere Pan 400.

7 thoughts on “Reload to Noir-Where – The Harman Reusable Camera”