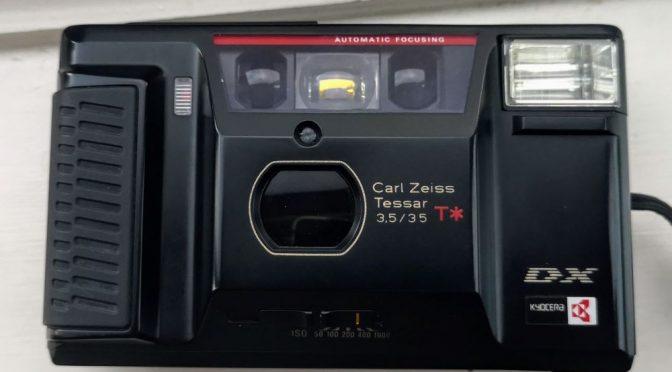 I’m not accustomed to legendary elite high end compacts. But sometimes the precursor to them fall my way such as this early Yashica T* series. Whilst it still has a cache it’s a fraction of the cost of the later models. This means it can be bought for the price of a couple of non discounted domino’s Pizzas

But was it a slice of heaven or destined to leave a bad taste in my mouth.

If you’ve not heard of the Yashica T* series cameras, I’ll assume you’re either a noob to film photography or have been in prison since the 1970’s. If you do a search of classic or best compact film cameras almost all these lists will feature one or multiple T* series cameras. Most of the attention is focused on the later T3 to T5 but even the T2 gets a look in.

But the original T sits a bit more in obscurity despite being the camera that started it all.

All of the T* camera share some 3 similar features. They were all made in the Kyocera era of Yashica cameras. This isn’t often regarded as a high point for Yashica but yet it not only gave rise to the highly sought after later T* series cameras, the Yashica Samurai and an ongoing collaboration with Contax for SLRs. That said some truely awful cameras did emerge.

Second weirdly all the cameras were sold as both Yashica and as Kyocera branded products. Weird as the Kyocera branding is all over the Yashica branded version and Yashica was known for it’s camera. Kyocera meanwhile was known as a specialist ceramic manufacturer.

A bit of history in action as Tessar lenses were developed in 1902 for Carl Zeiss by Paul Rudolph. This one of the longest lived and best loved classic lens formulation. A progression from the 1890’s Cooke Triplet, these features 4 elements in 3 groups. They can still be found in lenses used today from makes from Leica to Nikon. Carl Zeiss estimated they had made over 5 million Tessar lens by 2002 but that’s a fraction of the estimated 150 million out there.

The * in the T* stands for coated Tessar

The original T AF was launched in 1984 as a high end AF compact. $ versions exist. The orginal you set the ISO, the DX version where the camera does that for you (that’s the one on test). And of course there’s the data back versions of both designated as T AF-D. Worth noting this is the last year you’ll really want to use a the data back as it only goes up to 2019.

Aside from the 35mm 1:3.5 lens you have an automatic programmed shutter with speeds from 1/30-1/700 controlled by the SPD sensor. There a metering range from EV 8.5 -17 at 100 ISO. There’s a manually triggered flash with a GN of 9 (ISO100, m). This powered as are the motor wind and exposure system by 2xAA batteries. Yashica rated the battery life at 120 rolls without flash (falls to 24 with every shot using flash)

The AF system is just 8 focus steps which sounds awful compared to the Olympus mju-1 with its 100 focus steps. But the mju was from almost a decade later and was revolutionary. The Olympus Trip35 was still on sale in 1984 and offered just 4 manual set focus steps. The Ricoh FF-9s which was a well regarded 1990 compact offered just 6 steps.

This makes the cameras attractive if you shoot expired film or want some EV compensation. Even with the DX version you can just cover the DX code on the film with insulating tape and set manually.

There’s no backlight or other EV compensation option otherwise !

This is not gonna win any design awards. It was one of the first of a legion of an AF compact to sport the 80’s look. If you removed the logos you’d struggle to tell this apart from thousands of other cameras sharing the same angular design. It seems to have followed Model T in colour standards (you can have any color as long as it’s black).

The shell is plastic but reasonably robust. Flash is manually triggered, there a low light warning LED in viewfinder and you can use for Fill in. But there’s no other features like low light sync or red-eye.

There’s a standard easy load system which works well enough. Once film in you slide open the shutter cover on the top and hold down the shutter until the camera advances. A striped wheel on rear indicates that things are moving okay.

The viewfinder has bright lines with a central focus spot but you get in viewfinder icons. One is for low light to warn you to turn on flash. The others are 3 pictograms showing you the focus. A head for 1-2m (it blinks if not able to focus), group of people for 2-4 and a mountain for 4m+.

I really like this as you get actual feedback of your focus and allows you to adjust. Half depressing the shutter locks focus.

Beside the shutter button is a a switch. This will trigger the self timer (and can be used to turn it off)

The lens cover and shutter movement sound like a Soviet SLR mirror slap so this is no subtle street camera. Weirdly the lens stays uncovered whilst the camera rewinds .

This is a funny camera to give a price on. I like a few others recently have picked one up for around £30 before postage but there’s an equal number that go for just under or over £100. Weirdly a lot of known to be faulty ones seem to get sold between £15-30.

As stated earlier the data back is pretty useless after 2019. It also leads you to think Kyocera were assuming most would die before that date. IMHO most post 1970’s cameras become more disposable as plastic parts and cheap electronics take over. Manufacturer assumed we’d be upgrading every so often so durability poften became a second feature

So you do get a fair number of issue in reviews. Walter Koopmans put his in the parts bin as it could do distance focus. Broken Camera Club kept theirs but described a sticky shutter issue weirdly reminiscent of a XA2 despite the normalish button

I’d intend to do a 2 roll test on this camera but I managed to goof my lab load outs so the roll of XP2 is still on the shelf at the time of typing. But I was stunned by the 100 ISO colour images

This is a good camera. The focus was reasonably spot on and day I say it could more than hold its own against the later Olympus mju another progenitor camera.

I’d actually go so far to say this broadly was better in good light than the mju and certainly coped with distance better. It seems to struggle closer up however

The lens has a notable degree of pincushion distortion but this typical on mid 80’s cameras. Exposure-wise this camera was generally on the ball.

The forgotten original T* series camera is a quandary.

On a positive note it has a killer lens with reasonable features for it’s time. This is not a swiss army knife compact but it is more than competent as a P&S. It outruns the mju optically which is no feat for a camera that dates from a prior decade. Its one of a few AF compacts that offer more than just a focus locked light indicating you’e on the ball.

On the downside it just looks awful, like so many other early 80’s cameras. It has a crazy loud action too so not one for street photography. The lens distorts somewhat and it’s not that compact to start with. Flash control although not automated is lagging. I’m also a tad concerned re reliability…

…But this at the moment is pretty good. Irritatingly so. I’d wanted this to be a steaming turd of a camera as it would have discouraged me from going model up here. But this a corker of a camera in good light and is pretty much all you’d want from a P&S.

The DX version offers the best choice with best range of ISO and the ability to do some tweaking with some electrical tape. Whatever you do, don’t pay more for the D versions as they’ll be useless by the end of this year.

As well as the mju or the Ricoh FF-9s there are a few earlier fixed focal length compacts you might want to consider. Weird but the image reminded me of the Cosina CX-2 the mythic Zone focu compact that inspired the LC-A. Equally the Olympus Trip 35 is an absolutely worthy classic again Zone focus. And that’s the point. This camera can actually sit in with such alumni.

I’d however argue it’s worth always considering a Pentax Espio AF zoom. The Canon Sure shot Megazoom 105 is one camera that almost matches this and is period (and hooches with features)

I’ve already mentioned a few reviews. Sylvain Halgand has look at this camera on his site as does. The base model instruction manual is here.