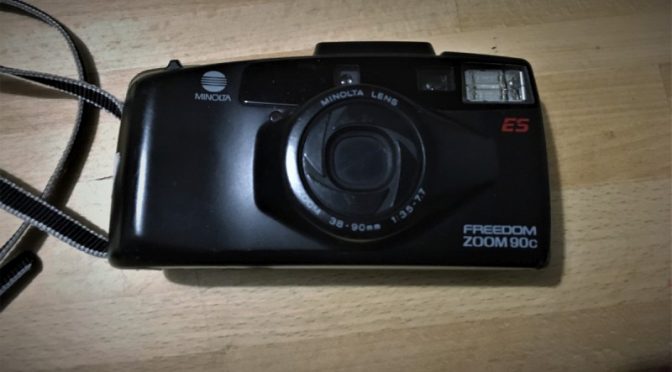 Most film photographers dream of owning a Leica, if even just for the Kudos. Social services got a bit upset when I tried to swap one of the weans for a mint M6 (with lens I hasten to add). But there are a few routes to owning a Leica for less financial pain. One is where this Minolta kinda comes in if you get a working ‘un

Minolta started co-operating with Leitz (the makers of Leica) in the 1970’s. The Leica CLE rangefinder was one of the first product, swiftly followed by shared development of the Leica R3 and Minolta XE SLRs (the R3 is actually one of the cheapest  ‘serious’ leicas you can buy costing the region of what you’d pay for a Nikon FM or FE).  However our focus is on the the compact end of things today and this where the 90c comes in.

Peas in an Expensive Pod ?

Leica from 1989 began to sell AF compacts. These were originally based on (and probably made by) Minolta models. The C2-Zoom which you can buy for about  50 quid was probably based on the 90c. Torsten Kathke excellent review at 35mmc also pretty much confirms they’re same beasts abet in different clothes.

The Leica certainly looks more distinctive, but the 90c is not bad for an early 90’s AF Zoom. The cameras differ in wide length too by 2mm, but bar that they appear very similar. Our 90c was sold both as the Riva Zoom 90c (Europe and Japan) and the Freedom Zoom 90c (US). In the UK I’ve seen (and owned both).

Both the Minolta and Leica share the same USP/Gimmick. Minolta called it Auto Standby Zoom (ASZ) whilst Leica called it Auto-Zoom. This held out the promise of the camera intelligently zooming for you when you held the camera to your eye.

Notice that feature on cameras you can buy today ? Nope, that because what you got was a dog’s dinner that makes the camera seem like it’s possessed. Literally pick up and point the camera and it decides to go zooming in and out all on it own (and this being an early 90’s camera means not so quietly)

You can thankfully knock it off or override it for a mo by hitting the zoom toggle. Both the 90c and C2-Zoom have the same top plate layout. In front of the shutter sits the zoom toggle and behind it 2 buttons for the flash system allowing you move between (1) auto, manual fill in and off. The second button sets a preflash for red-eye. Sitting over the middle of the toplate is a good-sized LCD showing info. Behind this is a timer button. The 90c was available with an optional IR remote.

Another Brick in the Wall ?

Although a typical, heavy early 90’s brick, Minolta made some efforts to style it. It sits comfy 2 handed and the controls are ergonomically laid out. It is as noisy as any other early AF zoom so not a great stealth street shooter.  Noise and ASZ aside, it is an easy enough. Loading is your usually DX coded autodrive affair.

Optically this a game of two halves. The wide end is quite peachy. The zoom end  is pretty soft heading to rubbish. It is okay close up but landscape shots are a no-no. There is no getting away from this in use and not surprisingly matches Torsten’s experience of his C2-zoom.

The wide angle isn’t perfect. It tends to pincushion distort a bit but you could live with it.

Shame as if Minolta had just made this a non zoom it would have been quite a killer camera.

However there is a another issue – reliability. I had to go through 3 of these to get here. I started with one completely knackered Riva then another Riva that was stuck only working at wide angle. The final freedom worked Until i dropped it but even before that bits of plastic were falling off.

This on paper sounds good but is let down by the tele end and the AZS stuff is frankly a bloody liability. Although reasonably styled it is heavy and to be frank you can by a good Pentax Espio for  less that will be consistently  good at all focal lengths.  Sure the 90c  is a great camera wide but this is mean to be a zoom and you could by a mju-1  for not much more. The Leica has the same optical issues so certainly not worth the money for the red dot privilege.