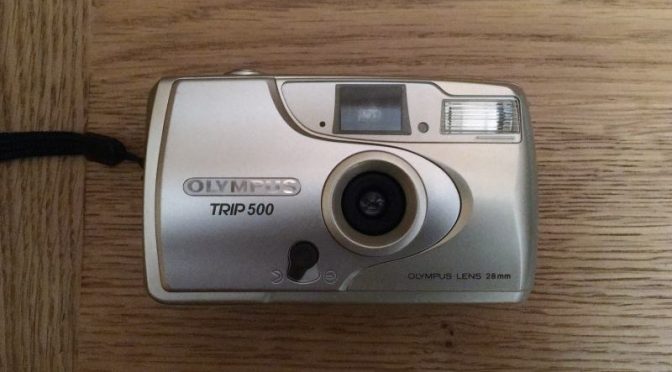 The Olympus Trip 35 is one of the most revered compacts ever made. Sadly Olympus had a bad habit of producing some decidedly basic & sometime awful cameras trading on its name. However  not all are that bad  But has this plastic trip the potential to be Olympus’s Lomo ?

I came across this camera in Jim Grey’s blog. To call his post a review is to grossly undersell it.  Jim has written a fantastic post that combines review, road trip, life journey and tour of the neighbourhood all bundled up in a blog post. I doubt I’ll do it justice here but what grabbed me was Jim’s description of a camera that had “vignetting and strong color saturation” leading him to speculate this would suit the LOMO crowd

So has Olympus done a LOMO or just a dud ?

Judging a book by its cover ?

If you’re looking for a 21st century take on the Trip 35, forget it. This a pretty basic box of a camera whose spec bar motor drive wouldn’t have set the world on fire in the 1950’s let alone when launched.  That said Olympus always have a knack of being stylish and this a pleasant enough looking tichy number. Wrapped in off silver plastic it wouldn’t look to dissimilar to some of the pre 2010 digitals and you wont stand out using it

Olympus managed to make it reasonably sensible and ergonomic in layout.  It also has one of the quietest and most luxurious sounding auto winders I’ve ever heard in a budget camera. Olympus even bothered to serial number it. There’s quartz date version allegedly out there too

Olympus Launched it in 2002 with 3 other models. We know from the press release those all got glass optics but not our Trip 500 (the Trip 505 was one of the other 3 but neigh identical bar having Glass lens and a timer).  All 4 models whether fixed or AF focus were similar in styling. All had sliding lens covers rather than the sliding clamshell design of the more upmarket mju series.

The routine version has just 4 things you can fiddle with – the shutter button, lens cover switch, latch to the film compartment and a rewind switch (yup this has even less features than the equally basic Halina Vision Smart S which at least gave you a fill in flash button). The Camera has a pointless tripod mount point.

We have an Olympus 28mm 3 element plastic lens with a wide aperture of f/6.7. The shutter is fixed at 1/100  but the camera seems to adapt to 3 ISO speeds (100, 200 & 400).  How much exposure control there is is anyone’s guess . If there is any,  it doesn’t take much  of drop in light to trigger the auto flash. So does the camera just simply adjust it’s aperture to film speed and rely on film latitude until the flash kicks in ? If  that’s the case it  makes it just an automated version of the Supertrip. It certainly it seems to Vignette more with 400 ISO film but that’s no guide. As I’ll mention the camera seems sharper in better light even with slower film. This is suggestive of some change in aperture. But the jury’s still out.

It’s worth reading the manual which I didn’t do. On opening the lens cover the flash auto-charges up irrespective if needed or not. If the flash ready light doesn’t come on in 15 seconds you need to replace the battery.  I found to my cost that you can still fire the camera without charging the flash in low light (I just assumed the flash wasn’t needed). The camera is a bit of an eater of the 2XAA batteries. Still the DX coding and easy load sytem make loading 100-400 ISO film easy enough. This really is pop in and play.

The red eye function  triggered by half depressing the shutter first was something I also missed. The flash is pretty weedy with a 1-1.9m official range at 100 ISO (1-3.8m at 400 ISO) and does fall off quickly in use.

If you want crisp accurately exposed images look away. Olympus claim the camera to have a focal range of 1m to infinity. The problem is that by infinity things are getting pretty blurry. Take the shot above of a bin in Edinburgh. The bin is actually quite sharp and the blue fronted shop is acceptable. However further away we get increasingly blurry and the issue is worse to the edges especially on left. It is better in good light and with 400 ISO film

Exposure isn’t bad but if used correctly the flash kicks in. And as I’ve already said that flash is only useful close up. However there’s both a issue & exploit built in here. The camera will shoot even if flash not ready so yup you can duff a shot but equally you can use for some serious lomo underexposing. Just use part dud batteries for this and work with Silhouettes and B&W film ideally.

The viewfinder is pretty basic with no t much going on at least its fairly central.

All in all this is a cheap fixed focus camera  that can produce okay images if used correctly  at short distances. But its plastic lens is a let down beyond that and at the edges. Even it’s predecessor the Supertrip wipes the floor with it clinically. It’s probably marginally better than the Halina Vision Smart S in standard use but not that much.

So what about the lomo potential ? Jim was able to shoot colour film on a trip to Mexico and  a sunny day in the Indianapolis  area.   I however headed to Edinburgh on a dull-ish January Winter’s day. That said the colours do pop a bit and boy ! does this camera Vignette especially in bright light with 400 ISO film. At a focal point of around 1.5-5m some shots could easily be mistaken for a  LC-A. And you can with luck get some weirdly funky shots by exploiting the autoflash charging.

….. the problem is there other candidates.  The glass lensed  Trip 505 raises the spectre of the same vignetting but with better optics.  And then there’s the raft of the other plastic lensed trips. For sheer quirkyness the XA1 must be in the running too. But then it doesn’t have that plastic lens effect or colour saturation issue. A worthy cheap buy for the lomographer,  if they can live with the limitations. But as yet I can’t be certain there isn’t a better Olympus lomo.