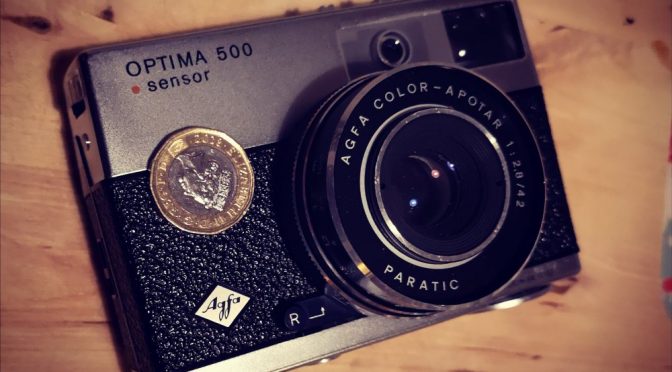 In 2015 I set out to buy cameras for a quid or less. 20 cameras later I’d amassed some brilliant finds amongst the junk. But 4 years later what does 1 quid buy you. Turns out quite a lot

In 2015 there was some dross (halina Silhouette I’m looking at you) but there was some greats. Some like the Pentax Espio AF Zoom are firm favourites and the last camera was a Nikon F55 which still servers as my back up AF SLR. But Could I do as well in 2019 with the pound crashing, Brexit looming and some film camera prices going loopy ?

The rules of this are unchanged, The cameras are sourced either online, car boots or in charity shops. Postage doesn’t count but the combined price should not exceed a Tenner. The camera also has to be a usable format (i.e 110, 35mm, 120)

For my own sanity I’ve limited any SLR bought to either a Nikon F mount, Pentax K or non interchangeable lens SLR. I’m not doing any instant format cameras either

This exercise is never likely to bring you a Contax T series or a Nikon F4 but there are some surprise to be had.

An I’ve had a flying start with several icon makes already but I’ve had some issues as well. The first roll are awaiting the lab but here’s a few things that are worth knowing

I’ve already managed to pick up a SLR body on this run in literally a few days. I’ll report back on that soon once it’s been tested but it is actually quite easy to get a SLR body for next to nothing.

There are 2 camps to look for. The first is Praktica bodies. I really can’t fathom why these are so overlooked when simpler more cumbersome soviet rivals like the Zenit series go for quite a bit more. Praktica were never high end but they did produced a series a cheap but reasonably well built entry level SLRs for the M42 screw mount.

The cameras may have lagged behind rivals but were solidly made and a cared for one is likely to provide years of service even today and provide a fantastic entry to one of the widest lens ranges that is available (and one almost every camera mount has an adaptor for).

Know your models to get. Not all have TTL metering and be aware of the B series. These use the later Praktica Bayonet mount – actually much more advanced cameras but limited range of lenses (although a M42 adaptor exists). That said the B series are the consistently cheapest bodies

The other group is the AF body. Pretty much every major brand makes a consumer bodies can be got for just a quid. In Nikon’s case it’s likely to be the F55 (and yes still happens). Canon EOS bodies are prone to going for a quid (8 in the last month) but be aware some like the 500 (not the 500N) have some potential serious sticky bumper issues. Minolta bodies too fall into this trap. as ever it’s worth spending a bit more to get with glass as this is a cheap way to get a lens. even if the camera is toast, the lens can usually be sold on for more than you paid for both. Just watch out for fungus

2 Classic names are easy to come by

However be realistic. Bashed up Leica lens cap don’t sell for just a quid, let alone a camera. You can still get a Nikon SLR for that money mind…..

4 Prepare to get incredibly frustrated by the ones you miss

5 The roulette wheel of ‘Parts not working’

Don’t ignore these completely. Sometimes this due to the camera actually being knackered. However others will be on sale as the seller hasn’t had time, the knowledge or batteries to test so “untested so selling as parts and spares”. Read the descriptions and look closely at the photos. I’m sitting with a few that seem to be fine but it is always a gamble. At a quid plus postage you don’t feel so bad.

9 thoughts on “The Return Of The Poundland CHALLENGE 2019”