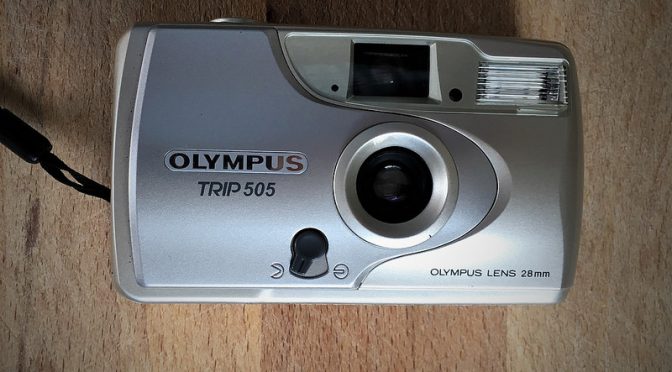 Hang on to your hat, Indy ! After a near miss with the trip 500 and an own goal by the AF51 have I finally come into the cave of the Mythical Olympus Lomo in the guise of the Trip 505. But is it a lost ark or a temple of Doom ?

If you’re expecting a serious review about a seriously good camera look away now. Olympus did loads of those but we’re here for more Lo-fi stuff. You can thank Jim Gray for triggering this world spanning quest since he asked the question of whether the Olympus Trip 500 was the Olympus Lomo.

In truth that came close but was just a bit too poor optically (sheez I know this about a lomo camera but I have some standards). It was launched in 2002 with 4 other body identical cameras and we’ve already seen the Trip AF51 which shared some features but went too much the other way optically and had the most annoying autoflash.

So what we needed was a camera with the glass lens and auto exposure of the AF51 but take out the  AF and add something to shut the flash off.

Ladies and Gentlemen I give you the Trip 505.

Not much is to be  found online. The only real stuff is what I’ve mentioned and the camera-wiki’s entry.  There’s this basic review on an old review site too. You can find its manual on a number of those manual sites (the ones where it is far too easy to click a link to download something you didn’t ask for) but it really is easy to use.

Battered Fedora and a Whip ?

From the front this looks near identical to the Trip 500 & AF5.  Like them, it also takes 2xAA batteries to power everything. The most obvious difference is  the top plate. The Trip 500 just has a mechanical frame counter and shutter button. The AF51 just adds a timer. The 505 upgrades you to a LCD panel and adds a flash control button.

After the AF51’s tendency to fire its flash in broad daylight this was a boon. The 505 isn’t as jittery at setting off the flash (again it may have been a semi knackered AF51 issue), but you can now turn it off. You can also set to red-eye and force on. There is no warning the flash will fire – the green LED by viewfinder just serves to tell you the camera is ready.

It is a bit odd the 505 has the top plate bling of the series and not the AF51.   It’s kinda the mid range camera of the quartet –  better lens but lacks the AF of the AF50 and AF51.  Whereas the AF51 had all the bells and whistles focus wise.

The camera again has the wide 3 element 28mm lens common in the series and like the AF cameras this one is glass. This has f/6.7 aperture and Olympus rate its focus range from 1m to infinity. It has an electronic shutter going from as slow as 1/2 sec to 1/180. As we’ll see there is some aperture control too.

Like the other cameras this essentially DX codes for just 2 setting 400 ISO and a combined 100/200 ISO setting. Non DX coded films are treated as 100/200 ISO. The camera has a typical modern motorwind easy load and is pretty quiet like the 500. It rewinds automatically and the frames count down. if you need to rewind mid roll the switch on the base gives you the option.

As with its sisters, to turn on slide the lens cover switch. The green LED will flash (the camera seems to charge the flash whether its needed or not) and once solid take your shot. Framing is via the simple viewfinder.

Flash does kick in a bit too early for me but at least not in bright light like the AF51. Still you can turn off (bear in mind closing the lens or leaving the camera to go into a sleep mode resets this). The camera is light enough for one-handed milarky and small enough for a jacket pocket.

The Panel is easy to read with basic info like film count, battery strength and flash mode. It counts down when the camera re-winds. The camera shares the same simple viewfinder with the other models.

The auto exposure works okay here and is reasonably on the moeny as long as you don’t do anything too challenging. There is no exposure lock option as you get with the LC-A so no option to adjust. Camera like this tend to rely on the colour negative film latitude so I’d keep your E6 for somewhere else.

Now to the optics. It is a game of two halves. In bright light boy does it vignette and pop colours. The action of an aperture is confirmed as the vignetting disappears on both DX settings as the light drops.

Focus is better than the 500 by some margin. In good light especially with 400 ISO film it is really not bad centrally around 2-10 m. It is not killer sharp but better than some several other fixed focus compacts I’ve used. It soften somewhat to infinity and that’s more noticeable on duller days when the aperture is wide but this is much better than many a cheap fixed focus like the Konica EU-mini. Off centre things do fall off a bit and fairly rapidly. There is some chromatic aberrations visible on the edges of some frames.

The camera has a surprisingly small degree of pincushion distortion for such a wide and cheap lens.

In some ways this camera is pretty Jekyll and Hyde. On bright days you get popping colours and vignetting with a fantastic lo-fi feel. On other days it’s a reasonable fixed frame shooter. Not quite in the league of the best but usable. And bear in mind the Lomo LC-A is a bit like this too (bar the fixed frame stuff)

If you’re wanting a seriously killer fixed framed compact, you’ve been reading the review (can I suggest the Olympus PEN EE series to you). But if you’re a Lo-fi fan there’s a lot to like here.

For me this is the best of the 2002 500 series. It has the higher end glass lens, better exposure and is the only camera where you can turn off the flash. It is not too shabby centrally and actually almost keeps pace with the AF51. I’ve not tried the AF50 but that’s essentially an exposure crippled AF51. In no sense is this Olympus’s finest moment but for a cheap turn of the century camera it ain’t bad

So is this camera the mythical Olympus Lomo ?

I guess it comes down to your own subjective view of what a lomo camera is. In bright light with colour film you certainly get a lomo feel. There it ticks a whole load of stuff for me.  I suspect there’s an argument for a tussle between it and its weaker plastic lensed sibling.

Both vignette well and boost colours (the 500 more so). They both have a quirky lens but I don’t fall into the trap of feeling a lomo camera has to have  a somewhat duff lens. The 505 will take a clinically better shot in both bright and lower light and is hell of a lot more practical. So for me this is the best candidate for that mythical title. However Olympus made a whole load more trips….

These are a bit like buses on eBay. Unlike the 500 which can be found pretty much 24/7 , 505s pop up in clusters. I’d waited a while for one to appear and sneaked in an early offer on a fiver start bid. About 30 seconds later 2 turned up with lower starting prices (Doh!!). All sold pretty much on one bid so you shouldn’t have to shell out loads for one of these.  In fact you could argue this should be known as the poor man’s Lomo at the price you should pay (a tag weirdly applied to the VUWS which is unlikely to see much change from £20).

At the same price I’d also consider the likes of the  Hanimex 35SE or Halina 160/260 for lomo spills and frills with some control abet plastic and manual. The Konica Pop has a cult appeal but not sure is quirky enough optically and it’ll set you back at least a tenner.

The quest continues but this is a pretty good attempt…..