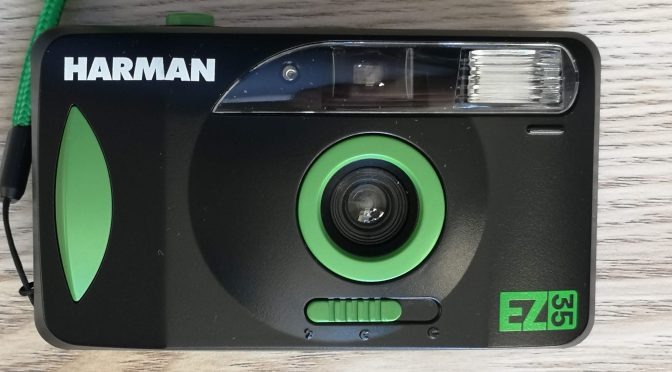 Those plucky folk at Harman Technologies (the folk behind Ilford and Kentmere films) are back again with yet another cheap camera. But the EZ35 is not just yet another near clone film company simple camera. It has a winder and other features. It perhaps gives us some encouragement that things are actually quite rosy in the the analogue camera world. But is it good as a shooter as well ?

To say I was Lukewarm about Harman’s last offering is an understatement.

It’s not that the Harman Reloadable was optically that awful.
It has clinically the best optics in reloadable disposable camera class. Shame they just made an awful loading/winding mechanism to go with it. Granted that class is not easy to live with from a loading point. But the camera inspired butt clenching terror ever time I wound on – let alone the horror of rewinding the beast

The EZ35 in comparison is a joy to load and its motor drive works well if you upgrade the packaged battery.

Hang on why isn’t this the Ilford EZ35

In 2004 Ilford was in a spot of trouble as digital eroded into the analogue market. A management buyout in 2005 led to Harman Technology which looked after the traditional analogue stock like film, developers and photo sensitive paper. But the Swiss based inkjet paper division was sold to another company.

Whilst that company (Ilford Imaging Europe GmbH) and Harman share the Ilford name on historical products, it’s clear they Swiss hold the name for new cameras.

Hence all the Harman Technology cameras cameras are either branded Harman or have no branding inthe case of the pinhole range. Meanwhile the Swiss folk announced the Ilford Sprite 35-II late last year.

So yet another Film Company makes camera ?

In the last 2 years it’s been vogue for film companies to sell their own brand. We’ve seen the Dubblefilm Show, Agfaphoto Analogue Photo Camera, Kodak M35, Yashica MF-1 amongst others. Interestingly they all seem identical bar subtle styling differences. Even the New Ilford Sprite 35-II seems another clone.

But the original Ilford company sold cameras like Kodak did. Even when the rise of digital happened they along with Kodak and Fujifilm continued making disposable cameras. Harman started making its own cameras long before it became trendy for film companies to do so with their pinhole cameras

So is this just another Fixed focus promo number ?

So on level you get a typical 31mm fixed focus camera with a f/11 aperture and a fixed ~1/100 shutter speed. The film plane is curved – common in cheap cameras to improve focus. Married to manual flash and no light meter or low light circuit – not far of the spec of those above

But what sets out the EZ35 from its Rivals ?

4 notable additions here.
Firstly a simple lens cover switch double as a flash toggle switch and a shutter lock. This is actually a notable step up and the only other cameras offering a built in lens cover at the moment are the Lomography’s LC-A series.

It also has a Red Eye reduction feature in the form of a bright LED bulb. Never convinced by these but again it’s nice to see. Likewise it also has a a small window on the rear (aka DX window) to let you see what film is loaded.

But the biggie is this is motorised a feature no other new film camera on sale offers today. It weirdly takes over that title from the legend that is the Nikon F6.

Oh and you get a wrist strap, roll of HP5 and a battery. The film is great but as we’ll see the AA isn’t. It all comes in ECO packaging and with a green wrist strap.

Looks Pretty Plastic must be the same ?


Yes there is a Lotta plastic in two tone green and black. The camera hails from China like the Dubblefilm clones. And core spec resembles the other film company cameras.

But it doesn’t have the shared design features they have. It is actually slightly smaller and its lens sits to right of centre whereas the other cameras sit to the left (including the Harman Reloadable).

The design is very similar to the later Barclaycard Prom camera which lacked a motor drive. The small ridge to stop you from sliding your finger over the flash the circular area around lens and the red eye LED are all very similar. As is the 3 way lens cover switch.

My gut feeling is this is an off the shelf design but I haven’t found the OEM yet.

How does it handle then ?

It’s easy to load – insert film, pull leader over take up drum. I’d go to the other side and try to snag it over one of the take up dimples- the folk at Harman told me that some folks can miss load by not doing that but I had no issues

The viewfinder is no frills and only covers about 40% of the actual frame.

The camera is easy to hold and shoot. Keeping the shutter depressed after a shot stops the motordrive. This allows you to be stealth in street photography but is shared with many a vintage camera.

The wider is not the quietest. The given AA battery doesn’t do this camera justice and I found the motor drive slowing incredibly after about 24 shots, leading to me to have to press several times to get the drive to wind on enough to cock the shutter.

A slightly used Duracell worked much better with issues on my second roll but was starting to struggle by the end of a third roll. This eats batteries for breakfast but at least with no CPU you cans swap out a dying battery. The camera doesn’t auto rewind at the end – a switch on the base need to be pushed. It leaves the leader out if that’s important.

For a plastic lens the camera is quite sharp centrally but it falls off quickly to the edges. It manages to give reasonable although soft focus central to quite long distances but the fall off increases. It does it best work (centrally at least) from 1-10m. There is some pincushion distortion evident and fringing is noticeable but not awful for the class. Flaring is evident and not in a good way so best avoid shooting into the sun. It isn’t particularly distinctive in its images – You’d struggle to telll if they were taken on this or many other plastic lensed numbers,

Look this is about average for a plastic fixed focus camera and places it ahead of many reloadable disposable. The Dubblefilm class models are optically are a little better and add a more distinctive feel but this isn’t far behind.

Harman are selling this currently for £47.99. This place sit on a par cost wise with the Dubblefilm show which granted you get a designer but naff bag and a fantastic lanyard but no film and manual advance. It costs twice the price of the Kodak M35 although that again comes with no film. It is likely to drop a bit in cost as did the Harman Reloadable (now sounding a bargain at a penny shy of 28 quid with 2 rolls of film – shame about the shi*ty winder)

This is actually useable camera and unique in being motor driven. the later is a mixed bag. For the future of film photography this is a big deal. This is the first film camera in many years to have a motordrive built in. But it sits in a class where most of won’t mind using a thumb advance

Optically this lags just behind the Dubblefilm Show and the clones. That’s worth noting as camera like the Kodak M35 can be picked up for half the price. But this come with film and the camera is more advanced with the winder, red-eye and lens cover. Of course you can get a vintage number but this is important for another reason.

And it is important for the future. It does mean you can buy a camera in 2021 with a built in auto wind. Doesn’t sound much but it does mean the ability to make more advanced cameras exists in 2021 and that’s a good thing. In the last few years we’ve seen a growth of film cameras. the bulk have been basic but a few like this Tashica… (opps I mean) Yashica MF-2 and Lomography’s in roads into Instax are important. None of these are spectacular but show we can still build more advanced cameras.

And That’s a good thing even if the EZ35 isn’t for you.

I use vintage with a small v here for a reason. Ever since George Eastman gave use the Brownie, there’s been a market for cheap basic cameras. Kodak’s move to the instamatic 126 cartridge helped to drive the fixed everything plastic cam market.

Whilst some folk get misty eyed about instamatics or 110, for me the heyday is the 80’s until the early years of this century with the near disposable cameras. Popular as exactly that – cameras you could take to the beach and took useable but still better than Grandpa’s Box camera shots. Ironically that’s where the new market is going back to at the moment

This however means there are tons of options. A good place to start is looking at anything made by Halina, Vivitar, Concord and Hanimex. Some I’ve reviewed are the Halina Vision XF, Le Clic C170 (no flash but the 470 is the same with flash), Vivitar T201Lx/kodak KV250 and of course the legendary VUWS and its clones (if you can live without flash)

They all lack winders – I mean you can understand why bother. But some basic models with winders. These almost always offer some exposure control. Of those 2 stand out.

Firstly the Goko UF2. By exposure control, you adjust the aperture to match film speed. nothing else -there is no auto exposure or varible shutter here. It has a glass lens but it does achieve that ‘I can’t believe it’s not focusable’ UF look. This model and the UF lens would be the basis of a host of bigger name basic cameras. Including I suspect some of the following. It perhaps is too clinically good however.

My other is the plastic fixed focus Olympus Trip. The glass lensed models are better and the Olympus Trip 505 stands out as a camera which is flawed but in a good way (aka the Olympus Lomo) .