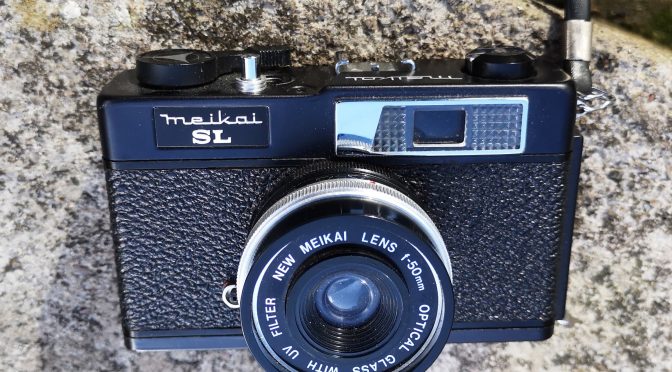 In 1963 Togodo launched the first post war Meikai camera. Our subject the Meikai SL was alter revision. Strangely these have acquire a slight cult toy camera status. Not sure why if you ask me.

It’s not that the company isn’t interesting

Three brothers in Law founded Togodo (aka Tougodo) in Tokyo back in 1930.

The company name in part was cleverly derived from Admiral Tōgō Heihachirō, a hero of the Russo-Japanese War. Clearly Togodo exploited this for marketing. So much so that the Imperial Navy actually asked the company to stop using the name. But bravely Nagatsuka Masanori, one of the founders visited the Admiral and persuaded him to let them use the name.

Togodo was one of the key exponents of the No-Need-darkroom process. This allowed users to develop their negatives on the spot and make contact prints without the need of darkroom gear almost two decades before Land gave us Polaroid film.

But the war was to have a massive impact. Camera production ceased as the company switched to making military aircraft parts. Parts of the company moved to 2 new locations with the 3 brother in-laws managing the 2 new and the old factory. Allied bombing destroyed the old factory and the 3 founders decided to dissolve the company in 1945.

But the two brothers in-law whom decamped in the war, wanted to carry on with camera production. They both at points used variants of the Togodu name. One was base in Toyohashi and would go on to make the legendary collectable Hit cameras amongst others.

The other founded by Toyota Yoshio in Yamanashi prefecture. Less well regarded but would proved more resilient making cameras like our Meikai SL into the 1980’s.

The original pre war company made a few models bearing the Meikai name. These use a 35mm paper back rollfilm and were of an unusual side by side TLR type

The name gets reused by Togodo Yamanashi with their Meikai EL series. But as we’ll see these are mass produced toy cameras.

Later plastic cameras would also bear the name. Although largely made in Taiwan and China, these included various Color Optical lens trashcams.

The Meikai EL range is a set of near identical 35mm fixed focus compacts with manually controlled aperture and a single shutter speed. They all seem to have a 50mm fixed focus lens with a choice of of usually 3 aperture setting. Made of metal and stylied to look like early 60’s Japanese cameras.

The only differences are styling and flash.

The original was Meikai EL pictured above. Our Meikai SL and another the Power Meikai EL are just minor revisions and all feature PC sync & a coldshoe for flash. They also have a a faux selenium cell. Most later models (the ELX, GT and ST) have a hotshoe rather than PC sync flash connector. The original model had a bulb option for shutter speed which is absent at least on the SL.

The models are minor revision mainly stylistically but notably the ELX which version has a hotshoe as do later derived version from it.

There is also the Meikai 35 that seems very similar and the Meikai HC35 series that lack a lever winder.

Notably a black only revision of the EL. This camera like the EL 304 has a possibly upgraded New Meikai Lens with Optical Glass with UV filter. Whether any of that is accurate or just marketing Flannel is unclear.

It’s a stylish looking beast looking like better range and viewfinders. But predominately made of cheap metal with some plastic parts like the faux metering and its cover. We’ve a fixed focus 50mm lens with an adjustable aperture controlled by chrome effect plastic ring around the lens barrel.

It feels reassuring solid yet flimsy at the same time. The top plate has a typical layout with a shutter button (non threaded). rewind knob, flim counter and a winding lever. There is also shot ready indicator that turns red when the shutter is properly cocked.

That’s handy as this does wind on well sometime a single wind does it, sometimes it’s about 8-10.

There is a crude switch on rear which allows you to rewind the film. This sits below the dial by which you manually zero the film counter.

Sadly I can’t find a definitive info on line. But there is at least some stabs baout the older SL. Sylvain Halgand estimates the Meikai SL has an aperture range of f/8-16 set up and that makes sense when I view this camera. However Tobias Erikson suggested f/8 to f/22 on his review on 35mmc. The EL like the SL camera just has 3 histograms Sunny (? f/16), cloudy (?f/11) and heavy cloudy/flash bulb (?f/8)

Testing the shutter with Vasil Florin‘s meter gave a speed around 1/80. Even given my ineptitude and shutter springs aging I’m guessing the speed originally was between 1/60 -1/100.

The camera has a PC sync., geared for a electronic (i.e. X sync). According to Kataan.org original SL manual recommended use the camera’s bulb setting when using flashbulbs which have a slower speed. But when using electronic flashes at the normal shutter setting.

The film plane is curved to improve focus. There is no metering here despite what the faux cell would suggest.

To load there is a pull leaver on one side which unlocks the film door. It must be moved back up to secure the door once loaded. And inside is a pretty standard loading arrangement assuming you can get the darn thing to wind on

So the camera’s winder in theory pulls the film around the take up spool and turns a sprocket above the film box. Again in theory this helps pull the film through, cocks the shutter and moves the film counter. I say in theory as discussed the winding mechanism is junk.

it’s pretty straight forward to use. Just set the aperture to match the weather with 100 to 200 ISO film. and shoot. The viewfinder is basic.

Corona 35 R ? Yes I wondered that too. Initially I’d dismissed a link to with Togundo cameras. The Corona 35 R is usually described in relation to the makers of the Hit cameras which were made by Togodu Toyohashi. But it may be more likely that the makers of our Meikai EL Togodu Yamanashi made the Corona as well as the camera has a very similar design.

Oh dear !
The Corona 35R link is strengthened as they are both are not great. The Meikai SL is better though and apparently has a cult following.

So where to start. While the aperture set to sunny it provides soft images. So these are mediocre with best focus about 3-5m and softening off beyond. However it is incredibly prone to camera shake. I only got between 30-50% useable images off the rolls I shot on this due to that.

How weak the lens is telling. I’d been prepping this whilst shooting a couple of the current plastic cameras in the Dubblefilm Show class. They might be plastic everything but take clinically better shots. It’s better than the Corona but not by much.

It at least is better than some cameras across the frame . There is less fall off to the edges than I wold suspect. The image quality suffers when shooting with the lens wide – I guess Togodu assumed you’d only use for flash shots.

The coating gives a slight cast on colour films. Not unpleasant but not that distinctive. However, it has the weirdest distortion I’ve seen with a vertical pincushion and a horizontal radial barrel effect. There is fringing and chromatic aberration to keep the most ardent Lomographer happy but the overall image is even by lo-fi standard pretty dull and soft.

So I paid £9 for mines before P&P. Now that’s ball park- the price of these are between £5-10 on a quick glance

Final Thoughts on the Meikai SL

The TL:DR is good looking cheap camera sadly let down (even by crap camera standards) by the optics and a slow shutter. And then there’s the awful winder (and trust me I’m not alone).

Look I love a soft retro looking image like the next man but these just lack character and are just unreliable and prone to shake. Yes my plastic fantastics maybe won’t last as long but they will at least wind on properly and take better images.

So better than the Corona but really not worth seeking out IMHO. That’s a shame as they look quite nice but are let down by their cheap unreliable innards.

Camera-wiki’s Tougodo page is a good starting point for the history of the company and models.

Meanwhile on Mike Butkus‘s site, there’s a manual for a Meikai FC, which is closely related. It’s from the Meikai HC35 series and the models have a thumbwheel and bigger counter dial but are broadly otherwise the same. I’ve mentioned other reviews en route but As Minas Câmaras is also worth a look.

Alternatives to the Meikai SL

Even a color optical lens camera can produce as god if not better images with more Lo-fi although fake charm. For a retro looking toy shooter that is actually fun to use the Halina 1000 (aka Ansco 35 plus several other variants) is a better choice. Equally if you are happy with 120 roll film an original Diana clone or the current Diana F+ are worth a look. The modern Dubblefilm Show clones also are a better bet although have fixed exposure.