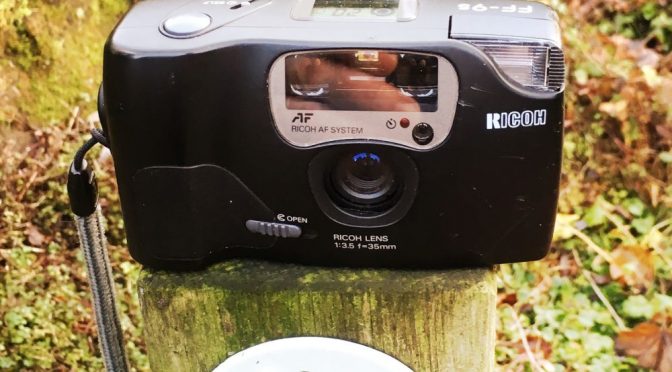 The Ricoh FF series has a bit of a cache especially around the fixed focus models released in the late 80’s and early 90’s. But how does this (aka Shotmaster AF Super or One Take AF Super) 90’s restyling of the FF-9 work out against the rivals of its day ?

Let’s be honest Ricoh has had a knack to making  fixed focal length 35mm cameras such as their ’60’s space age Ricoh 35 Auto series right through to their GR series cameras often described as modern classics and featuring in those lists of Prestige 35mm cameras that can set you back hundreds of pounds (irritating Ricoh have launched a digital GR model – can no one be bothered to tweak the series initials !!). so we should be on firm ground

The FF series began with the sought after manual  focus, Minox 35 like FF-1 in 1978, but rapidly moved onto fixed lens length AF compacts and is one of the most confusingly numbered series there is and even ended with a zoom compact the FF-10.

Our FF-9s is a bit of a ponder too. Launched in 1990 many  feel it is just a redesign of the ’88 FF-9 (even the cam manual king Mike Butkus describes these as essentially identical in spec and manual bar slight weight differences). The FF-9 was also felt to be identical to the FF-7 (not listed on Ricoh’s list) and certainly comparative reviews find little difference. Obviously there may be minor refinements to the electrics but little seems to come thru.

I shot this around the same time as the Olympus  µ[mju:]-I as you can see from the specs each camera has its strengths and weaknesses with the obvious factor of the Ricoh having the faster lens but the Olympus has cheaper battery, wider DX coding and it’s lowest shutter speed. It also has a mind boggling 100 focus steps compared to our Ricoh’s six.

Design wise this is an older bit bigger model but is still quite pleasing and will get in a coat pocket. It’s auto flash pops up when the camera thinks it is needed but you can simply pop it back down (there is no flash control menu options). The camera does auto-backlight compensation with flash and the manual recommends being 0.8-3.2m for flash. In auto standard use the camera allows you to lock focus on the central viewfinder point by a half depress.

There are a series of modes activated by 2 recessed buttons which you’ll need to use your nail to activate. Between the shutter button and the top plate LCD is the timer mode. Oddly you just depress this (no need to hit the shutter) to trigger a 10 second timer (you can prefocus first however) with a red LED on the front coming on and then flashing.

The second button is on the strap side (beside a proprietary cable insert point). This gives you the functions

Pressing the button or closing the lens cancels the mode. These modes put it ahead of the mju-1  which only offers flash and timer modes

You might thing having just 6 focus zones would be a limitation but bear in mind no one accused the manual 4 zone focus Olympus Trip 35 of being poor at focusing. essentially the AF system will focus the lens to 6 points and in good light when the aperture is small  & depth of Field is high this can be a pretty sharp shooter. My sense is that the bulk of these 6 zones are stacked in the near to median range as things are still reasonably good in lower light (although this varies but never more than just a bit softer on some shots). The median to distance shots are still acceptable but that bit softer. As with all compacts the distance is that bit softer even in good light  although the panorama mode helps a lot here in good light and even more when the light falls.

There is only a tiny amount of pincushion distortion that is almost invisible and the camera has next to no vignetting. Exposure is pretty good too although this aint the best low light shooter I’ve used it is not bad. The winder is as noisy as you’d expect for a late 80’s design but not too intrusive.

Overall it was a pleasing enough shooter and I’ve not really pushed it through its many modes. For average shooting in the near to median distance, it wasn’t much better than the Canon Sure Shot AF-7s, I tested a while ago but it offers a lot more mode wise and in poorer conditions. I’ve seen sharper but this is an okay all rounder. It isn’t a prestige camera beater but is a fraction of the costs and takes resonable shots