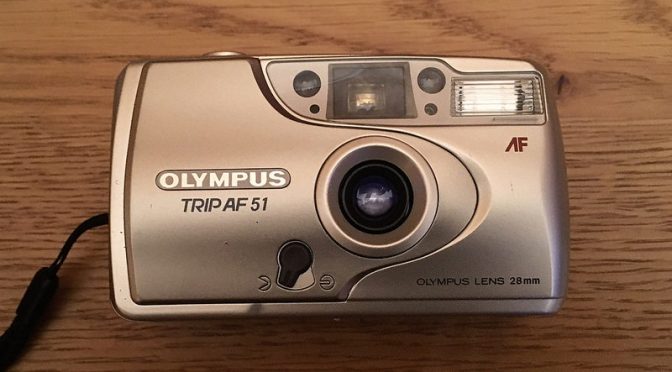 Sunny day with a wide 21st century AF camera,  some subtle street shooting might be on the cards ? Not if you’re using the Olympus Trip AF51. This has the lowest trigger for its autoflash I’ve ever seen.
Shame as there’s some other things that make this quite likeable.

If you’re thinking you’ve seen this camera before on this site, you’d not be far off. The AF51 was released as a quartet of cheap, wide angled compacts bearing the Trip moniker in 2002. I’ve already reviewed the lomo-esque fixed-focus Trip 500, the entry-level of the four. This on paper is much improved and we’re not just talking the AF.

It boast a glass 3 element 28mm 1:6.3 lens  and  a programmed shutter of 1/40-1/140. Like the 500 it auto sets film speed using DX coding but with just 2 pins that essentially means just 2 settings (100/200 ISO and 400 ISO). It rewinds itself although it still has the switch on the base to allow you to rewind mid roll. It also has a timer button.  A data back version exists and there is the more simpler AF50 which has the same lens as the AF51 but the same mechanics as the 500.

But it’s the flash that annoyed me. I suspect my camera was a bit duff although it came in immaculate condition and on review has performed well enough in terms of exposure. I’m use to cheap autoflash cameras kicking the flash when things get overcast even with 400 ISO, but here the flash kicked in with anything but full sunlight.  My 500 was never as bad as this.  This made worse as  like the 500, there is no way to turn the flash on or off.

The flash is slightly more powerful than the 500. However not by much with a range of just 0.8-2.3m with 100/200 ISO films (doubles up to 4.6m with 400ISO).  It has at least 2 saving graces. Firstly a red-eye mode triggered by half depressing the shutter button. And secondly, the whole camera including flash is powered by two cheap AA . Olympus suggest with 50% (oh I’d love for that level) of flash usage you can get through about 20 rolls of 24exp film on one set but I reckon that’s quite ambitious.

Body-wise this is the same chassis as the 500. It is compact and nicely styled for what it is. Like the 500 there are few controls really just the shutter button, self timer and lens cover switch. A tripod mount makes more sense here with the timer. It also has a quiet motor driver. In use you’re mean to wait until the flash ready button lights up before using (the camera will precharge whether needed or not)

That the only indicator light – there’s no real feedback you’ve focused okay or that the flash will fire.

Much as I’ve griped about the flash the 2 rolls I shot with this were actually reasonably exposed for a basic camera and all 76 shots I got scanned back from the lab were okay exposure wise. Actually the flash acted quite well as fill in giving rise to a few shots that were better than they should have been. The relatively slow shutter range means this isn’t the greatest for action shots.

The lens is much better than the plastic lens of the 500.  When AF was on the mark sharpness was pretty consistent across the frame only mildly softening at the edges. It as wide and has the same Lomo vignetting tendency as the 500.  There’s also a mild case of barrel distortion but not all that bad. This is not gonna challenge the  mju-1 or 2, Olympus’s flagship compacts but actually not that bad when focus is on.

The AF is okay a median distances 1.5-5m a bit soft but I’ve seen worse. I found it not so good closer  to the alleged 0.8m close point. Beyond 5m things increasingly are less consistent and like many a AF compact this worsens as you head to the horizon.

As you can guess the flash irritated me although oddly it has its pluses. This rules the camera out as anything to consider seriously and if you want a street AF compact look away to the likes of the mju-1 or 2 or the better models in the Pentax Espio series. It can’t do distances that well. It has pretty limited shutter range and few features

But it is compact, quiet and stylish (for what it is) with a wide lens. Load with 400 ISO and it makes a reasonable night out shooter that does okay with some quirks that unlike your Contax T3 you don’t have to worry about someone spilling their pint on or leaving on the bus home. It’ll do alright at median distances but there’s much better out there if you either pay more than the £1-10 the AF51 sells at or are bulkier (ricoh FF-9s et al). Like the 500, it does have the Lomo style vignetting that might suit some combined with that pretty wide lens.