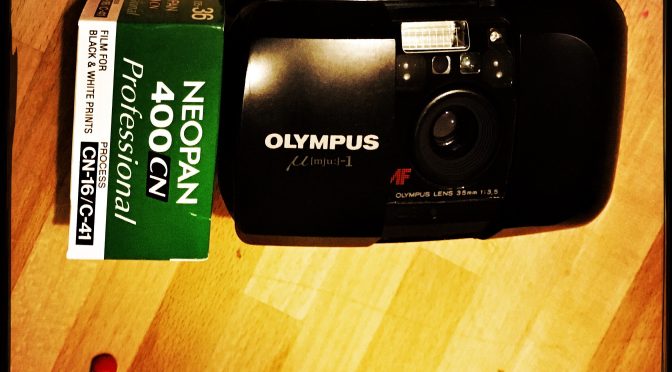 Well think again ! Even high end models focus in a series of zones called focusing steps, Not that most manufacturers let you know. But in 1991, Olympus were only too keen to tell us with the μ[mju:] (aka mju-1 or Stylus) a camera that changed the face of the AF compact market.

It was the μ[mju:] that really woke me up to this issue. I had been aware that some early cheap AF camera were really just automated Zone focus beasts. What I hadn’t realised was pretty much every AF compact ever made not really been aware of this little hidden secret in the world of camera design.

A good example is the Olympus Trip AF a cheap little compact selling on the mighty Trip 35’s name. This according to camera-wiki actually just focuses at 1.5 and 4 metres (I’m guessing there is a 3rd focal setting for hyperfocal infinity if it misses those points). Now that makes some sense in a cheap compact as with a bit of luck depth of field will mean most things will be in acceptable focus. That principle made zone focus compacts such as the legendary  Olympus Trip 35 such killer compacts in the the pre AF era.

The Trip 35 has just 4 focus zones (aka steps) but this late 60’s classics was still selling as a killer compact into the 80’s  long after AF arrived. Olympus relied on depth of field trick alongside killer Tesslar  optics. This  makes the Trip 35 lethally sharp in all but lower light.

Not really ! They just have more zones

Stepping up a Gear Olympus style

Not much is listed in specs about focusing steps with the exception of the groundbreaking Olympus μ[mju:] I. It clearly lists 100 steps in its specs and Olympus still are proud enough of that to make & continue to make that point in their camera museum. That point was clear – we have more steps than anyone else.

Of the dozens of well regarded compacts in the late 80’s little is know about their step count. For example, the much loved  Ricoh FF-9s from 1990 gives little clue in its manual. Admittedly it is just a re-hashed FF-7 (1988) but a typical camera pre our Olympus mju.

Although I can’t find any collaborative sources camera-wiki indicates this just has 6 focus steps ! I’m  inclined to believe that. With a 100 steps, the μ[mju:] is a wee bit more consistently sharper than the FF-9S. Some FF-9S shots I took were really sharp but others just that bit softer. On balance I’d have to say the Ricoh probably is optically better as some of its shots can be much sharper but only some. The AF system on the Olympus wins out here. It can even forgo a dedicated distance mode

So what does this mean for your camera ?

By the time we hit 100 steps AF step focusing really is almost as good as you could get with a smooth linear focus – Take the μ[mju:]’s spiritual predecessor the XA rangefinder. I’d like to see someone try and demonstrate more than 100 distinct & meaningful focal points when focusing by hand. I’d struggle to get 100 meaningful points on a manual focus SLR lens.

Secondly Olympus nicely draw a historical line for us. It is likely that rival quickly caught up so this in part explains why cameras from the early/mid 90’s on are that bit crisper on average (another good example perhaps is the Pentax Espio AF Zoom v the Pentax Zoom 70 – just a few years difference but noticeably better). It also in part explains why classic 90’s cameras like the mju-II are able to rival later elite models. And as with the Ricoh, why cameras with average performance can sometime pull of a stunningly focused shot.