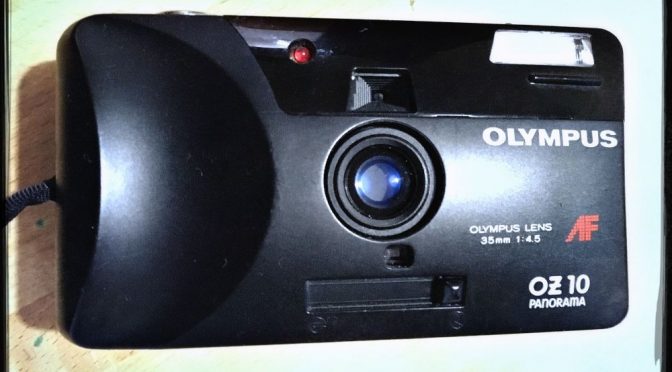 Given my recent trouble with mju’s you might have thought I’d stay clear of Olympus compacts for a bit but then this budget number landed in a job lot and you know it’s not that bad.

This Hong Kong made non zoom 35mm compact shares styling cues with the more expensive mju, but underneath the body is  believed to be actually the bones of an older camera the 1987  AF-10 (ironically the AF-10 had a clamshell design whereas the OZ-10 has a sliding lens cover).

Many folk link it to being the same camera as the Olympus AF-10 Mini  (aka Olympus Infinity Hi-Lite) although I’m not 100% convinced . That said the OZ-10 superficially only differs in the fact that it has a data back as standard and a faux panorama mode. A switch on the rear moves a mechanical mask inside into position allowing you to shoot in Kodak’s Panorama format. This appears gimmicky to us now as the mask just crops the top and bottom 3rd off the frame an effect you could just do post scan or in the darkroom  but back in the 90’s would allow you to get a panorama style print. The databack also only went up to ’16 so not something you’ll use for another 70+ years.

It’s quite pleasing to hold and look at. The influence of the more expensive mju series is plain to see and the camera does look like a bulkier mju. Although it lacks the clamshell the sliding lens cover oddly comes with kudos as it also unlocks a viewfinder cover a la LC-A style. The camera unusually for the age uses 2xAA batteries rather than some expensive lithium photo battery. They give the camera a distinct wedge shape when viewed from above. Access the battery compartment requires you to stick a coin in the slot on the rear and twist.

The viewfinder is basic but adequate and there are the usual focus (green) and flash ready LED.

All points to its 35mm 1:4.5 lens being a  3 element  construction. And you know it wasn’t that bad. With good light a reasonable enough performer better at all distances and was probably marginally more sharp than the Ricoh FF-9s in more shots in the mid to near distance although that camera was probably better with the infinity mode for distance. Drop the light levels and things soften however especially at distance where the FF-9s slaughters it in part due to the infinity mode.  This is no camera for landscape shots in the rain but It remains okay though at near to mid range. There is a bit of pincushion distortion evident but no worse than most rivals. It doesn’t seem to be able to focus much below 1 m so not great for macro shooting.

It was a reasonable judge of exposure. I’m not worried about the relatively slow lens as in reality you’d want to retain depth of field over shutter speed in such a basic compact ( it is likely to have a low number of focus zones). You can lock both exposure and focus by half depressing the shutter. It vignettes slightly in most shots.

All in not bad for a cheap non zoom AF compact. Sure it ain’t gonna give a Contax T2 a run for but it will cost a fraction of that and for simple snaps is okay. Few pop up on eBay (the AF-10 seems more common), worth a few quid but wouldn’t pay more than £20 and you enter the territory of mju-1 cameras which on paper should be much better at that price (if they work). Personally I’d plump for my Pentax Espio AF Zoom or a Zone focus XA2 both of which may be cheaper and a lot better but are different classes of camera.