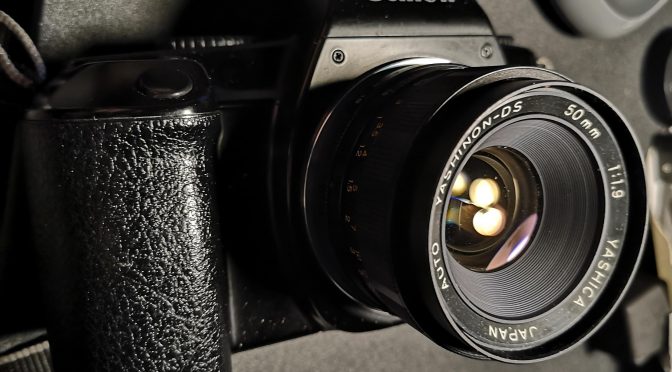 When I posted about my experience on this camera I got a few folk pointing out that their EF-M was actually doing fine with Manual focus lenses. So in the spirt of fairness I got a new adaptor ring. An apology is due as I must now concede the camera does work with manual lenses. But only some adaptors and even then it’s a crap experience.

My review of the EF-M can be found here. Essentially the camera is based on the Auto focus EOS 1000 (aka rebel). Like it’s sibling it uses canon’s EF mount but has an awkward arrangement of 2 control dials. Mines also didn’t work with either the generic M42 to EOS or Nikon AI F to EOS adaptors I had. As EF lenses are geared for AF this added to the pointless view of the camera.

I put this post on a couple of FB groups. Now most of the fair criticism I got was folk actually like using it despite the woeful ergonomics. And that’s fine. I’m one person and what floats my boat is not necessarily the same for other folk. All I give is my opinion.

But I did get an few folks saying theirs worked with non EOS lenses. I’d ignored those that said you need to file down the adaptors to work. But I did get me thinking was it the adaptor rings ?

Turns out it was

Why an Apology – A Tale of Two Rings

The 2 rings M42 & NAI) I had tested worked fine on my EOS 300D dSLR and APS film IX 7. I actually hadn’t much faith in the Nikon ring as it was frankly cheap crap that was more a concern for getting stuck on the lens. It however worked on both my EOS 300D and a EOS IX7 as did the M42 ring.

The M42-EOS ring wasn’t expensive but was much better quality although unbranded.

But given comments I shelled out for a K&F Concept adaptor. K&F are more mid priced and dependable IMHO – they’re not the Mercedes of the adaptor world more like ford mondeo – workmanlike.

The K&F is clearly heavier and more detailed in the finishing but little separates it that I can see.

But it works with the EF-M. The camera meters too and is within 1 stop of reading on my Reveni Labs meter. The difference is within tolerability of a centre weighted v area meter. So an Apology is needed but…

So all you said about the EF-M is Pants ?

I’ll admit an Apology is due.
You can use non EF lenses (woo hoo) and I was wrong to say you can’t. But clearly to get it to work requires you to get a perfect fit adaptor. I got lucky with the K&F but that’s a mid price £20ish bit of kit and I wonder if just a miniscule difference in fit is all that separates it from working and or not. So don’t blame me if you buy a K&F for your EF-M and it doesn’t work.

But it doesn’t deal with the crap ergonomics that I discussed in the earlier article. It is all a bit of a to use. I’d still argue buy a AF EOS body. Yes you lose a manual focus screen but gain more with the ergonomics.

The point is legacy lenses.

I’m a Nikon shooter mainly and I like the fact that I can mount AF-D lenses on my Nikkormat (and my Nikkorex F clone) and put 1970’s AI lenses on my dSLR or my 21st century F75. So yes you can mout your FD glass on your EF-M. But.. you’ll need an adaptor that works, have to deal with bad ergonomics when you can get a later AF body that will work easier.

One thought on “An Apology to The Canon EOS EF-M. It can mount via Some Adaptors. But it’s Still Pointless”