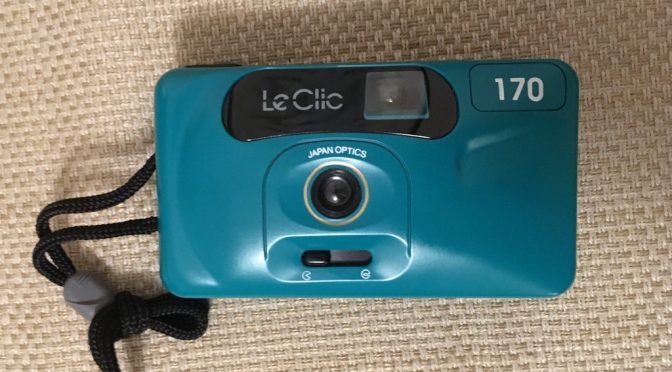 At first glance things don’t look promising.  We’ve a basic all plastic camera with its basic design and no features. It also come with that badge of dubious quality ‘Japan Lens’.  So if you’re a fan of plastic cameras is it worth your time to click this le Clic ?

Le Clic is one of several brands of the Concord Camera Corp. This American company that from the 1982 to 2009 turned out millions of cheap n cheerful cameras under brands like Le Clic and Keystone.

Concord’s cameras although definitely lo-fi worked okay and can give the plastic cam loving crowd a wealth of options of variable quality and format. Some models like the 110 film Le Mini are actually sought after.  Concord also made cameras for some big names so you might find your fun lomo shooter is one of theirs.

The museum of design in plastics has one in their collection and gives a possible window of 1990-1999 in the c170 variant guise.

The plastic shell was actually intended for a flash camera with a battery compartment.  The  Le Clic 470 is  basically the same camera but with a built-in flash. The Le Clic  870PM Caption Camera  as well as data back version both use the same chassis. The downside is this non flash camera ends up being much bigger than it needs to be.

Not a lot of money went on design here. It’s as basic as you could get with no real features with the exception of the unusual winder. The design forces you to grip it on either side. There’s a simple sliding lens cover that doubles as shutter lock. On the top plate you get a simple mechanical shutter counter and the shutter button. It is  all plastic affair and although mines felt okay the rear plastic window of the simple viewfinder keeps shifting half way up.

No spec of the 170 can be found online but the very similar Fun Shooter FS40 suggests a 35mm lens with f/8.5 aperture and 1/100 shutter.  The Japan Optic Focal length seems about right for the 170 too and I’m guessing even if different the exposure settings won’t be widely off that. The back of the 170 reminds you to use outdoors only and use 200-400 ISO film.  In common with a many other simple cameras,  you’ve a curved film plane .

The only quirk is the winder which is identical to those found on minox style 110 cameras. This requires you to push a slider twice to wind on.

Exposure is down to you judging the conditions and loading appropriate film sticking in 400 ISO is a good cover all but in the summer you’ll get away with 200 ISO and even 100 ISO if it’s really bright. Theres’s a small amount of vignetting evident.

This shot probably defines the lens in a nutshell

It is actually okay in the centre from a about 2 to 10m. It becomes softer beyond this and if you get below 1.5m things get blurry. Off centre things are really soft with obvious Chromatic aberrations. A comparable lens is the Olympus Trip 500 but that has a lomo boost to colour saturation which the 170 doesn’t have. So shots a few metres away are okay if central but are limited out with this. There’s some pincushion distortion going on for good measure

I won’t write off  and it may give the plastic camera addict another outlet.  But for me it’s too mediocre but not in a good way,  It’s just not quirky enough like the Trip 500, Halina Panorama and the VUWS. You can also get more compact flash shooters with slight clinically better lenses like the Barclaycard promo camera and the Concord made Polaroid 170BV.

This is just a another mediocre plastic camera – much bulkier than it need  be. Its only stand out feature is the winder which tells you a lot.  Widely available on eBay even new in packaging for a few quid.