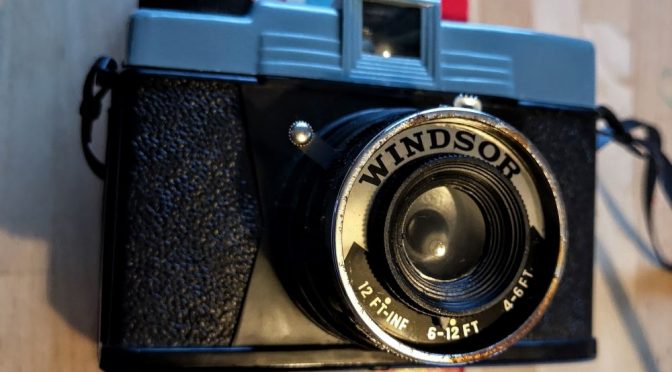 Recently I got my grubby hands on the American Windsor and took her to the our local music Festival. Before you get worried that I’ve a Summer run in the Tower coming up, I am of course talking about a Diana Clone called the Windsor Camera.

I loaded it up with the new Kosmo Foto Mono 120. But all did not go to plan thanks to the camera,

Each Summer Dumfries and Galloway Council run a Music Festival that has grown over the years to be a 2 day event with quite notable performers turning up (Professor Green, the Vamps and some lass of the X Factor this year’s highlights). It’s not Glastonbury but it’s alright for a wee town like Dumfries, Whether my cash strapped council should be funding such things is another matter.Still we get free tickets for the family every year. I usually get the job of looking after the youngest so I never end up seeing the big acts but I get to enjoy wandering around the fair bit.

I’d got some of of kosmo Foto’s first batch of their Mono 120 a few weeks before and was itching to try it out. I really like the 35mm I tested in a Nikon with a prime lens last year. And I suspect if I had a good quality medium format camera lying around I’d get similar results.

Shame I don’t own one of them….

So erm … i stuck the 120 into what at best can be described as a lomographer’s plastic wet dream (or to anyone else a nightmare), And not a good one at that even by the standards of the class.

My rational was vaguely sound. What better camera for a festival than a 60’s fair staple a Diana camera. I’ve a few but sitting in my office was the Windsor. I’d got this boxed with cap and manual from the USA a while back and never tried it out.

The camera itself isn’t in great shape. What I’ve always assumed to be shiny plastic, the chrome rim around the lens, turns out to have some metal in it ‘cos it’s rusting. The manual is good at showing me how to load and use the camera to “take wondrful pictures” but has nothing on spec.

The lens has what I measure to be a focal length of 70mm. The rest of the specs vary as you can read in my review of the Samtoy camera another Diana Clone. Ignoring the Bulb setting this camera offers a fixed shutter (some where between 1/45 and 1/100) . Given the blur on the Star Flyer rides it’s more likely towards the 1/45.

This is not the Camera to test film in. On first glance the results are worse than my Samtoy but it’s not the film’s fault. Credit due there’s quite a bit of Latitude here with the film. Despite the limitation of a crap plastic camera that light leaks, no meter and has vague setting I got 16 out of 16 useable shots from an exposure perspective.

Despite the lens contrast is good with a fine grain and tonal differences going on. The roll wasn’t tightly wound at end. But that more likely a camera issue as the camera lacks any retain clip or foam to help keep the roll tight. In any event the looseness was tichy compared to what I’ve had with Lomography 120 films.

But you have crap lens at the end of the day. I like a bit of vignetting and my focus to soften at the edges when going Lo-Fi. I don’t like a vaguely sharp central circle that occupies about a centmeter on the 4x4cm negative,

I’m also never sure that B&W goes that well with these at best of times. The plastic lenses are never that contrasty and the soft images I feel actually suit colour more. Allan Deitrich whom had the biggest collection of these (now owned by Lomography) would disagree. But he explains why the photo on the box and in the manual look nothing like the images captured. Yup They weren’t taken by the camera.

Its clear that these vary in quality and it’s likely if you pick up another Windsor it will be fine. But for now this ones just for the shelf.

3 thoughts on “Dirty Diana Goes To the Fair”