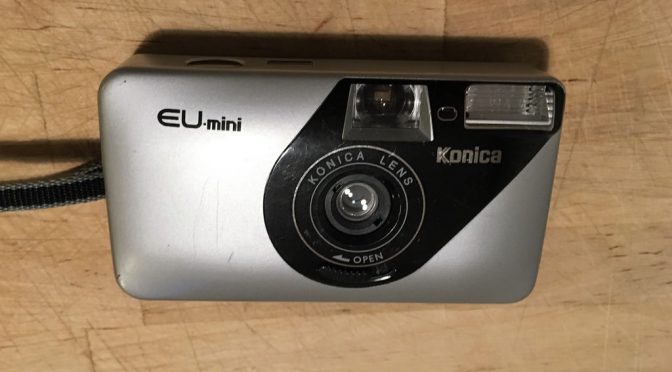 I’ll honestly avoid being too political about Brexit here.  But as I type this the UK is still in the process of negotiating its departure from the European Union .  Whether this leads to a prosperous future,  disaster or somewhere in between remains to be seen. But is this oddly apt camera from Konica, a  Negotiation Disaster or Brexit busting Deal.

Konica was one of the key innovative Japanese camera makers of the 20th Century. They are arguably best known for the C35 series of cameras.  This began with class leading compact rangefinders but evolved to the first Flash compacts and the world’s first AF camera. Konica remain reknowned for their optics although they stopped camera production in 2006. Their late high end cameras like the Hexar RF are still some of the most sought after elite compacts.

Konica also had a good crack at the lower end market making the well liked and funky Konica POP fixed focus flash compacts. The EU-mini (known as the Konica U-mini in the USA) sits more at that end and was launched in 1993 according to camera-wiki. That was year that the Maastricht Treaty came into force and effectively gave rise to the current EU but I’ve no idea whether Konica  was trying  to cash in on this.

It’s a pleasant enough looking camera that came in  a variety of hues and some collectable patterns (snoopy, Bayer Munich and the satrs and stripes). There is both this fixed focus number and the EU-mini AF which adds erm…. AF (see BKS Picture’s review of that). Nice and compact with smooth lines. There’s a large shutter button and a small LCD for film count on the top plate and the camera takes 1XCR123A lithium battery with a purported 20 rolls 24exp film with flash used half the time life.

Spec wise we have a 28mm 1:6.7 lens with 3 elements.  The camera has 4 pin DX coding but separates out effectively into just 2 settings 400 ISO and shared setting for 100 & 200 ISO films. This is actually pretty common on basic cameras of the era (see Trip 500 for example).Its also worth noting the film plane is curved (an old old trick on cheap cameras with basic lenses to improve focus).

The exposure system is a bit more unknown. Sadly Konica  unlike other Japanese makes doesn’t keep any online info of their historical models and I can’t find any historical detailed reviews. We do have the manual courtesy of Sylvain Halgand  and this confirms a auto exposure system of 3 stops (below this the camera will auto trigger the flash). We know the camera has a maximal aperture of f/6.7 but beyond that there is no confirmed data. Camera-wiki indicates 3 shutter speeds (1/60-1/180) but there is no Konica confirmation of this. I suspect this came from Sylvain Halgand’s notes which list the shutter range as these stops (but doesn’t describe as 3). Both the BKS and Wallace Koopman’s reviews describe these as just 2 speeds and the aperture fixed.

Problem is none of this fits well. The fixed aperture and 2 speeds are a non starter as Konica clearly define 3 stops. It is possible the camera-wiki 3 speeds and a fixed aperture is right.  But that’s not full stops and there’s another problem. Shooting in bright light with a aperture of 1/180 and f/6.7 would leave images up to 3-4 stops over exposed. That doesn’t happen in use as we’ll see.

My gut feeling is one of 2 things happen.

Both would allow the camera to function as it does and allow it to shoot. However I favour the latter as we’ll see 400 ISO shots are that bit sharper

The camera is fully automatic. You load the film and the motorwind advances for you. You’ve no control of the flash but I found this doesn’t kick in until light falls below around EV11 on 100/200 ISO films which given my recent frustrations with the Trip AF51 is no bad thing. The motorwind  will auto rewind at the end with a countdown in the LCD. Its easy to shoot with but you get little feedback.

There’s a simple no frills viewfinder with no info in it. there is a window on film door to remind you what you’ve loaded

The exposure was pretty spot on for non flash shots. This isn’t gonna handle complex lighting but what do you expect. Exposure seemed fine for both for 100 ISO and 400 ISO  confirming my suspicions re the exposure system.  Flash is okay at 100/200 ISO at target range (0.9-2.3m). However using 400 ISO film, the flash overexposes if used under 3m (manual’s suggested range 0.9-4.6m)

Things sadly fall with the focus. Many folk describe this as soft focus. and I’d agree. It is better with 400 ISO film supporting the idea it uses a narrower aperture. Focus is better close in and forget it for longs shots compared to the rivals.  There’s also evident moustache distortion and softens off from the edge. There’s minimal vignetting and it doesn’t really flare if that’s your thing.

It’s not awful and for a cheap compact camera to pocket it is stylish and exposure wise quite good. However it isn’t the best in class by some margin optically and it really doesn’t have any quirky lomo features like cameras like the Trip  500 (abet worse optically).

Optically even the ‘roid 170BV I reviewed was better and if you want something as small optically better but with quirks you could do worse than the Olympus XA1. If you want total class from a fixed focus consider the Olympus PEN EE series (72 shots a roll too !!). If your heart is set on Konica however I’d suggest the Konica Pop.