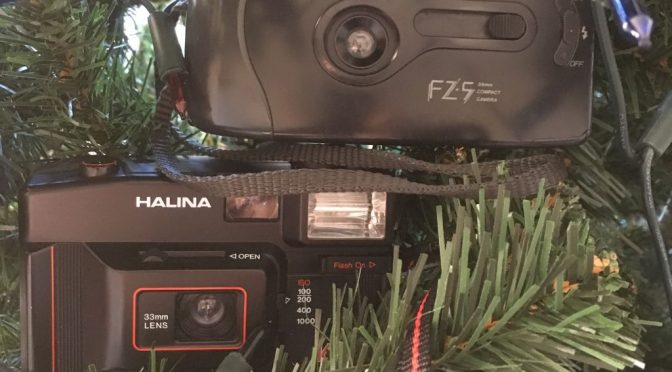 ‘Twas Christmas Eve in Canny Cameraville and a small package arrived with a Fuji FZ-5 and a few days later a Halina 160 turned up. But how do these 2 basic 1980’s  plastic-tastic cameras fare ?

Neither of these are going to be design classic but I’d say the Halina 160 nips ahead cosmetically. As plasticky as it is – it has certain 80’s charm and like many Haking products, it might be cheap and flimsy but there is a certain thought into the styling. The camera has a sensible clean line layout with sensible grip locations and nice detailing like the red ring around the shutter button. It’s not that the Fuji does anything howling – it is just a bit bulkier and blander looking for all intents like a cheap early 90’s fixed focal length AF compact

The Halina was  tweaked as the Halina 260 (essentially the same but I suspect with a better flash) and there are numerous other rebrands such as Dixon’s Miranda FG-Z.  Compared to our Fuji, technically the Halina is a higher level camera with some user adjustments and has a coated 33mm plastic lens. As you can see it is related to the fixed focus compact flash cameras both in function and style like the Olympus Supertrip but without the Glass lens. There is a switch adjusting the aperture for 3 film speeds but it does lack the low light warning LED system.

No such flexibilty with the Fuji however as everything is fixed. Sylvain Halgand gives the Fuji specs as a 35mm f/9.5 lens with 1/100sec shutter. The cameras  takes 2XAA batteries for the flash although like the Halina they aren’t required for non flash shots and there is no low light circuit. A neat point to notes is the shutter counter goes down as you rewind. The assumption is this a camera for good weather and was probably intended to be used with 100 ISO the commoner consumer speed in the 80’s. Of course you’ll get away with 200 ISO today’s de rigueur standard and faster speeds in duller light. The flash as with the lens cover is activated by a slide switch  but this doesn’t appear to affect aperture (ready light on rear)

Let’s be honest neither of these simple lensed numbers was going to be killer sharp and nor are they in the same league as the VUWS and the near mythic Goko UF but I guess if you’re reading this you wouldn’t expect clinically good optics. The following comparison shots were taken on a good winter’s day with 200 ISO film where the Halina would have its widest non-flash aperture.

The Halina clinically is the overall winner it is less soft overall than the Fuji and shows much less in the way of softening off centre and much less pincushion radial distortion.

At the target median distance (around 3 metres) things change a wee bit. The fuji becomes sharper centrally although I still think the Halina edges it. However the Fuji off centre still is softer and more distorted. It also seems to be poorer at the ~1m mark.

But again you may want a toy cam with a quirky lens. The Halina is arguably better although still soft and has no major quirks. What the Fuji also does quite nicely is it flares pretty spectacularly. The Halina flare is not quite as pronounced although changes as you would expect with the aperture,

Exposure-wise the cameras seem reasonably on the money when shooting 200 ISO in bright conditions. The Halina also gives you some flexibility as you can change the aperture (so if shooting 400 ISO you can drop the setting to 100/200 as light fades and widen the aperture even more by taking the batteries out and shooting with flash in the on position. The Fuji flash charges a bit quicker but both seem optimal flash wise around 2m.

Robustness-wise both are plastic but one suspects the Fuji might last a bit longer bar its weedy rewind lever. Watch out for battery corrosion in both.

It’s a n interesting choice here. Optically neither is fantastic. The Halina is more compact, better designed and more interesting and adds the aperture adjustment flexibility. It also has a better lens. The Fuji is more obviously plastic lensed but a bit more robust