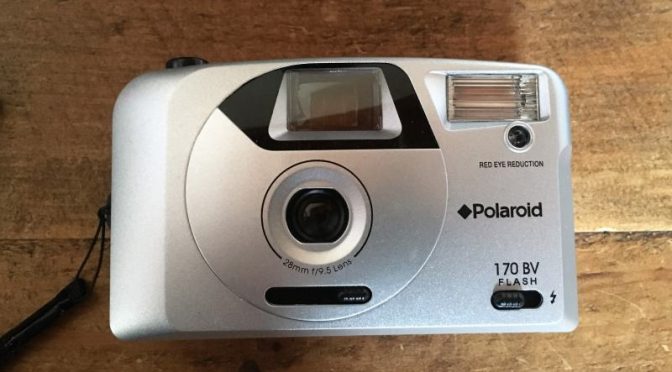 Polaroid produced some of the most Iconic cameras of the latter half of the 20th century and were the pioneers of instant film decades before the term instax was dreamed up. However this isn’t one of those and actually is just a ‘roid in name only. Does it stack up as just another cheap basic camera or is there more to meet the eye ?

Polaroid in their dying days before bankruptcy, like Kodak, had a tendency to pimp their name. This explains why today you can still pick batteries,  light bulbs, rubber band balls, TVs and clocks to name a few rather odd products with the Polaroid name

They even let other camera sellers pinch the name and this is where the 170BV comes in. Made in China and sold by the Concord Camera Corp this has nothing to do with its instant namesakes.

This is as basic a camera as you can get. It might have a  modern looking sleek plastic wrapping but there is next to nothing underneath. This a fixed everything camera with a fixed focus 2 element 28mm  plastic lens matched with a fixed aperture of f/9.5 & 1/100 sec shutter. That’s not untypical for a fixed everything compact and places it about ½ to 1  EV below the legendary VUWS and the cult Halina Panorama, It oddly shares the same focal length as the panorama and a curved film plane to improve focus (an old trick). The manual describes a focal range of 1.5m to infinity.

Beyond that there’s not much to talk about spec-wise. The camera has a manually triggered flash (no low light circuit) powered by 1xAA. It purportedly has a red eye function. The camera also features easy loading. The sliding lens cover switch also doubles as a shutter lock and erm  ……..  that’s it.

It is more suited to using 200 ISO in common conditions although 400 ISO will never be an issue and 100 ISO is more than do-able if the sun is out to play. Unlike the VUWS and the standard panorama you have the built in flash when light falls although don’t get to excited by this. The manual suggest a flash range of 1.5-5.5m although no film speed is given for that.

Bodywise the camera is a typical cheap looking two tone number common in the late nineties and the early noughties. I’ve seen a version with a blue circle around the lens which is a bit more appealing. It’s not bulky but there’s no grip or ridged areas to make holding it easier. The signiture ‘Big Viewfinder’ (hence the BV) is reasonable but overestimates the frame area.

Having had a run of automated basic cameras like the Trip 500 and Halina Vision Smart S, I was pleasantly surprised (gotta point out that’s not exactly a high benchmark). Despite being completely fixed in focus, shutter and aperture it holds it own against those

That’s not to say the images were crystal sharp but centrally around 3-5m this ain’t bad for a plastic lens.  Off centre things soften really badly. If it was a human it would be getting refereed urgently to ophthalmology !!! That said folk spend ages on photoshop or with filters trying to achieve this effect.  I’d say it’s better than the halina and not far off the Trip 500. It vignettes but less than the Trip 500 does and there’s some barrel distortion.

It falls off at distance as you’d expect but not as badly as many a fixed focus -that f/9.5 really helps. But the edges. are still really smudged The lens also seems to add a lot of colour vibrancy here too when I’m shooting fujifiilm emusions.

The choice of aperture means you can get away with 200 iso negative Film down to EV100 10-11 allowing for most daylight shooting. Overall I’d say it’s better than the halina and not far off the Trip 500.

So we have a camera that’s better than a cheap disposable camera. It’s no where near as good as the likes of the cult plastic cameras like the VUWS or a good brand disposable.  But it is better than many other fixed focus plastic numbers. As it turns up for a quid or 2 on eBay and if lo-fi is your thang this might be worth a punt. That said it can best be described a dull looking. However the sharp centre soft edges gives a kooky look to the images which it produces.

Reviews are few but Sylvain Halgand has it on his site (in french).