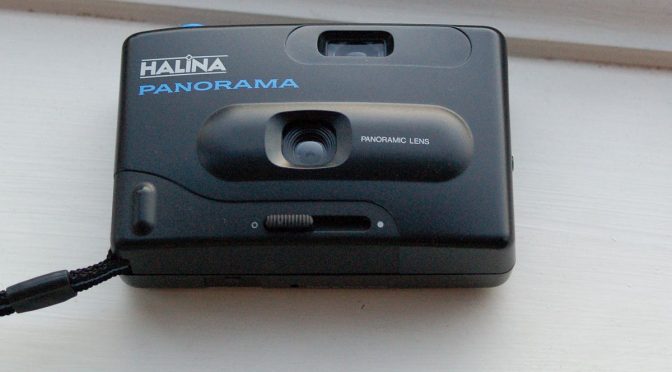 The Halina Panorama (aka Ansco Pix Panorama) has a bit of weird cult status for such a plastic simple plastic camera and is something you can pick up for a fraction of the cost of some classic plastics like the VUWS. When a few turned in a job lot I decided to have a bit of fun and send them out to some willing victims for their views. First up we have Hamish Gill of 35mmc fame, an unashamed lover of compact cameras but is usually more at home discussing the merits of the likes Yashica and Contax T series.
How would he cope going Lo-fi ?

I’d reviewed this camera some time ago and thought not bad for a cheap plastic camera but not great.  But when some more landed in my lap I sent the cameras out to 3 very different folk. As well as Hamish, they went to Dan James of 35Hunter fame who although not adverse to the odd high quality compact has been entertain folk with his exploration of SLR lenses. Our third contributor is new to this site but Lucy Wainwright has already carved out a niche following with her work on Flickr,  instagram and as co founder of She Shoots Film amongst other things. Of our 3 she’s likely to be more at home with cult classic plastic.

But  back to Hamish,  here’s how he got on (abridged with kind permission from his fuller 35mmc post) as you can see I goofed by missing the lost mask (the panorama has a very easy to remove mask).

The Halina Panorama is one of the most basic cameras I have ever come across. It has no features and by this merit is even more simple than most of the disposable cameras I have used!

That said, it does have one unique attribute – it’s a crop-frame panoramic camera. The viewfinder and the film gate are both designed to produce a wide 13 x 36mm format crop from the middle of a normal negative. As such, you might then be wondering why many of the shots in this post are all full frame? Well, I too would be wondering that had I not spotted that the plastic bits inside the camera that usually crop the frame had been removed before the camera landed with me.

Anyway, regardless of the “modifications” to the camera I shot a roll of Lomography 400. My first instinct was to try and blutac a viewfinder to the top of the camera to aid framing. But, after holding the camera to my eye I realised that the £100ish viewfinder/£1 camera combo was nothing short of bloody ridiculous, so just resorted to using the pano finder as a rough guide. After all, do you really need more than a rough guide when shooting with a camera of this ilk?

I then figured I’d just get my daughter to shoot the roll. These are some of her handiwork. Note the low angle (I’m not that short).

Amusingly, the results didn’t actually come out as bad as I thought they might. I’d figured that the image circle would be too small for full frame shooting, but as there’s no strong vignette it doesn’t seem to be completely the case. That being said, it’s fair to say the image quality does drift from bad to abysmal into the corners. Then there’s the cheap plastic lens flare, and the distortion… etc

So is it worth removal of the panoramic crop film gate? Well, probably not to be honest. Had they been in place, I might have got some slightly more interesting frames. Some shots shown were cropped from the centre of the frame in Lightroom, and are therefore are a rough approximation. I’ve selected these ones as I remember liking the cropped frame when I was shooting

When this camera first landed with me, I just rolled my eyes. I’ve seen and not bought 10’s of these in charity shops, at car boot sales etc. There’s even one in London Camera Exchange in town right now (it’s been there for a while!)

With so many point & cameras available with better lenses, and even in many cases the option to crop the frame, for not much cash, it might make you wonder the point in shooting something so basic and plastic? Well, apart from the attraction that some people have to the plastic lens look – which I must admit does work quite nicely with the Lomography film – I have to say, shooting a fixed focus camera with zero options for changing the settings is undeniably enjoyable. Does that mean I would recommend you seek the Halina Panorama out to shoot yourself? Well, I’m not so sure I would go that far!

Thanks Alan, you put a smile on my face, if nothing else!

So not a winner but at least some fun. But how did the others fare ? Next it was Lucy’s turn…