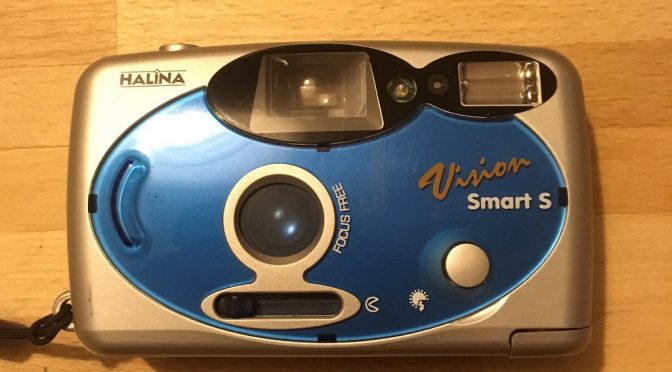 Another year another Halina ! The smart S is one of Haking most recent recent 35mm cameras and  their site still lists the its sibling the Vision smart as an active product. But is this modern spin on cheap and cheerful any good ?

We’ll get to the optics and images later but Haking have followed the memo in this camera’s general design. Clearly intended as a fun, easy to shoot camera most likely marketed at the start of this century. The colourful styling wont please the ‘paint it black’ purists out there but it was never intended for them.  My guess is it’s intended to be bought for the kids to take holiday snaps on. So what you get is the brilliant blue on silver curvy styling with a big finder and very simplistic controls. I suspect there may be rebrands including an Ansco version although very little exists on line beyond Haking’s  site.

I can’t find anything else online about the Smart or the Smart S. I assuming both have the same 28mm 1:5.6 3 element plastic lens. Certainly both are fixed focus viewfinders with motordrive. They come with a full automatic flash (bit like the Olympus AM-100). With both cameras there is a manual trigger for flash for fill in.  2 AA Batteries power that flash, the motor drive and sensor systems.

The only picture of the Vision Smart is the titchy one on the Haking website. The Smart S has a a obvious Red Eye reduction LED, that seems to be missing on the standard Smart.   Inside it has just 2 sets of DX pins  covering Ground & S3 contacts. This essentially means the camera can tell if you’ve loaded 400 ISO or not. This is common with budget DX cameras and usually means film speeds of 100, 200 and 400 ISO being recommended which I suspect is the case here. The camera will treat 100 & 200 ISO the same, relying on latitude to deal with the extra stop.

The camera has an easy load system. There’s no feedback to confirm you’ve loaded it and unlike most other motorwinds you’ll need to take a couple of shots before you reach the first frame. That said it actually loaded without fuss.

To  take a shot simply slide the switch beneath the lens to open the cover (this doubles as shutter lock). Compose your image in the big simple finder and press the shutter.  The flash auto-triggers if the camera thinks the light is too low. You can also manually trigger it by pressing the button on the front for fill in flash shots.

For a turn of the century camera the winder is a tad loud but better than most early 90’s motordrive. Haking were proud of the Big Viewfinder and actually although basic it is reasonably central

There are a few points worth noting . You’ll need to manually flick a switch on the base to rewind at the end of a roll.  On a negative side I found it a tad easy for my right fingers to start encroaching on the lens in use. Also make sure you keep batteries fairly fresh as it goes through them at a rate of knots. Also be aware with low batteries the camera will still fire whilst waiting for the flash to charge. I also found it dead easy to get one of my right fingers in the way of the lens.

So How does it perform ?

The camera actually wasn’t as bad as it’s plastic lens and body would suggest. In fact at around 2-3 meters in the centre of vision it was surprisingly sharp. However it isn’t all good news

Let’s start with the exposure. To be honest I thought this might just have been an automated version of an Olympus Supertrip class camera. With those you set the aperture size to the film speed and the camera relies on film latitude to allow for reasonable exposure above EV12 and prompts you to put the flash on below EV12. We know Haking had form with these cameras with cameras like the cult plastic Halina 160/260 and the so called Hong Kong Lomo, Halina Micro 35. Certainly the fully auto flash triggered around the expected level. The problem I have thought is that exposure seemed just that bit better than that in daylight. So perhaps there is some limited exposure control here.

Flash is variable. I’m sure the camera came with some notes on distance but I’m guessing optimal for 200 ISO is 1.5-2.5 metres and 2-5m for 400 ISO. There seems to be at tad colour casting and I’m not convinced the red eye feature really helps

Optically the lens is quirky. As I stated get an object centrally about 2 meters away and it is surprisingly sharp. In fact your shots look bit like you’ve used a more decent focusing camera with a wider aperture. But that’s actually not a plus – This camera is much softer towards the edges (oddly seems worse on left than right). Also centrally the camera becomes softer so anything more than 10m away really suffers with 200 ISO.  400 ISO is a tad Sharper at 10m but again falls off. Off centre focus drops quicker.

There’s a bit of barrel distortion  but little colour issues.  Actually This isn’t that terrible a lens, given it  was aimed at kids who would take photos of subjects at about 3 meters .  Just don’t go off expecting to be the next Ansel Adams of landscape photography with it. And no it doesn’t flare in any exciting manner.

If you want a killer all functioning , razor sharp, crisp exposed shots in any circumstance camera look away now (and really this a Halina – what do you expect !!).  However  Haking had read the brief, hand it over to your kids at a party or on a Trip out (just be prepared to explain why it didn’t do so well with the photos of that nice view). Also it can produce actually pretty crisp central images at close distance.

Is it better than a Branded disposable ? yes & no. Up to 5 meters I’d say it is beyond that no, but hey this reloadable and shouldn’t cost you a lot. I’m still none the wiser of the difference between the smart S & the smart.

I’ve mentioned a few cameras you might want to consider already. The aforementioned Olympus Supertrip is pretty good, but my sharpest no frills flash compact remains the Goko UF. If you want a fixed focus that is hugely more capable and won’t have folk at your camera club laughing at you, the Olympus PEN EE series cameras are worth a nod as is the Olympus XA1 or XA2.

Of course if its plastic fun you’re after don’t forget the VUWS or Halina Panorama.