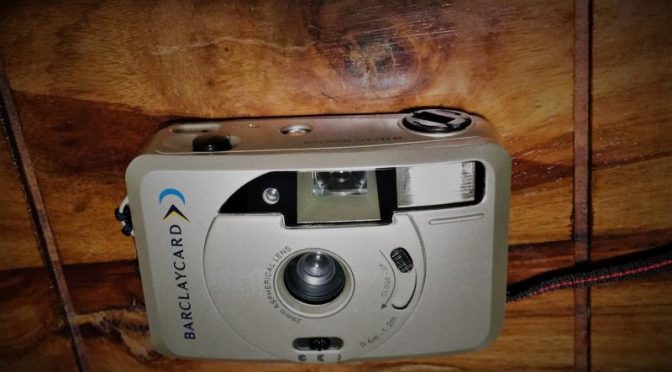 I’ve a bit of a soft spot for the old Barclaycard Visa Camera despite it being pretty basic and prone to breaking. However I’ve been long aware there is another Barclaycard film camera. So when I came across a couple of these for peanuts I couldn’t resist.

We can reasonably accurately date these too. The box carries the fact that Barclaycard sponsored the English  Premier League. This dates the camera to between 2001-2004.  Like it’s ‘visa’ predecessor it is a cheap promo camera of its time. So we get a fixed focus and exposure but with a built-in flash. I’m guessing you’ll find other identical promo cameras for other companies. 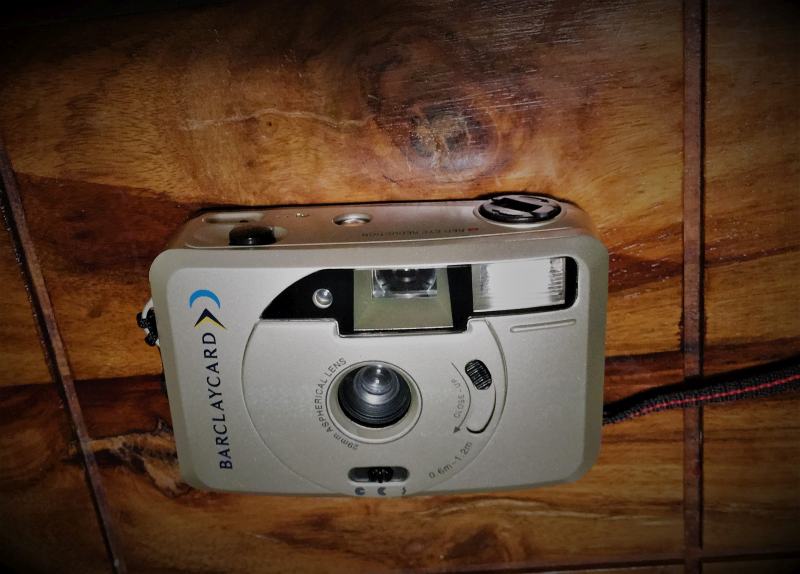 It is pretty typical of a cheap camera of the era and is reminiscent of an evolved Polaroid 170BV with a circular design on the front plate. It is a tad smaller and incorporates the option to turn on the flash. A second switch puts the camera into close up mode (0.6-1.5m).

The top plate features the shutter button big mechanical counter and the rewind switch. The latter is used at the end of the roll to allow you to rewind. There is a biggish simple viewfinder which is worth noting quite off when using in the close up mode.

The Camera has a 3 element 29mm lens. Interestingly there are 2 aperture settings. The lens is quoted at f/5.6 but this is when the flash is engaged as the aperture appears smaller (somewhere between f/8-11 I’m guessing) when flash isn’t used. The quoted focal range is 1.5m to infinity on routine settings. No information is given on aperture but we’ll assume it to be somewhere around 1/100-1/125 secs given other similar cameras.

The flash is powered by a single AA battery. There is no need for this beyond powering the flash as the camera still works without power. A green LED by viewfinder tells you when flash is ready. The range of flash is 1.8-3m at 100ISO rising to 1.8-4m at 400ISO. This is pretty typical for a cheap compact.  There is no low light warning and obviously no exposure metering.

Worth noting the cocking of the shutter is triggered not simply by winding on. The cog over the film frame is required to cock it.

Daily Spend Limit – In use

Loading is easy with a modern easy load system.  You will need to decide on what film to load  but using 100 to 400 iso with modern negative latitude means you’ll get away with shooting in most bright conditions. I shot the original film that came with the camera (some now expired Agfaphoto vista 400) and a roll of BW400CN suggesting that you might be better sticking to 200 or 400 ISO. The film plane is flat here.

It is such a tichy camera meaning ergonomics are limited. On the plus it is light, on the downside it is easy to get your fingers too close to the lens. The close up feature obviously requires 2 hands.

Actually for what it is, I have to say it’s not bad. The 3 element lens is much better than many promo camera. I’m not going to say this camera is sharp but folk were making cameras for retail sale that aren’t as sharp (erm Olympus Trip 500 and Polaroid 170BV I’m looking at you). The film plane is not bad with just slight worsening towards the edges.

As with any fixed focus it softens to infinity but heck this really quite good. It seems to have an optimal for normal shooting of 3-5m.  However the close up works really well although the viewfinder means you’re off target vertically. You get a bit of pincushion distortion but really not bad. There’s a tiny amount of vignetting but nil to write home about.

Exposure-wise as you’d expect. You’ll have to judge your loading film to the conditions but 200-400 iso negative will do pretty well in most reasonable daylight. I’d not shoot low latitude slide film in one of these (other than experimentally).  You will find that however with any fixed exposure camera.

This is really quite as good for what it is. It will never rival an all singing and dancing high-end AF compact nor classic fixed focus shooters like an Olympus PEN EE. Nor is enough to make the king of the promo cameras the VUWS worry but it is actually better than some retail cameras. It is  hell of a lot better than the Lloyds camera, I recently tried. It makes a handy cheap camera to take with a killer close up feature and a good alternative to a disposable.

Compared to the original Barclaycard visa camera, it is a much better clinically and more robust camera. But here’s the issue, shots from that had a certain lo-fi charm. This newer camera is actually to good to be that lomo-esque but not good enough to challenge better fixed focus numbers.

Widely available on eBay in UK . Worth a few quid for some mid-fi fun